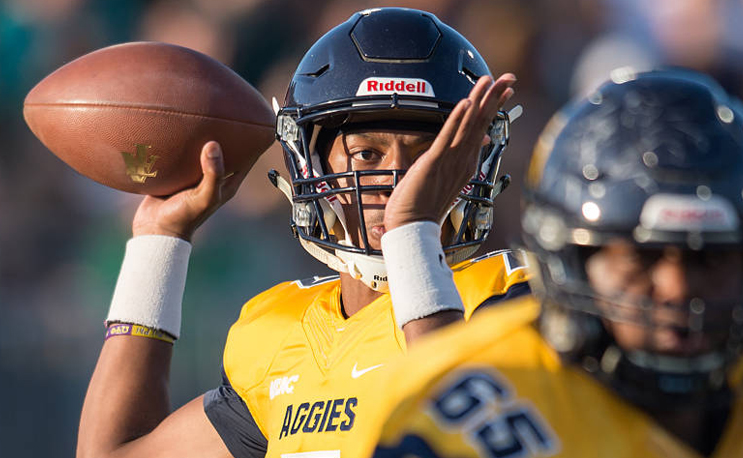 There’s still a long way to go, but is a 12-0 record out of the question for the Aggies?

Many people wondered how North Carolina A&T would fair in 2017 after losing Tarik Cohen, Denzel Keyes and other key players from their recent teams.

The answer through three games: so far, so good. So far, very good.

A&T moved up five spots from last week in the coaches poll after a 35-31 win over FBS UNC-Charlotte. The win was the second in two years for A&T over an FBS opponent, giving it a perfect record heading into MEAC play.

A&T is joined in the top 25 once again by Tennessee State and Grambling State as HBCU representatives.

TSU beat the MEAC’s Florida A&M 24-13 in the Tampa Classic on Saturday to improve to 3-0 as it prepares to move into Ohio Valley Conference play. That win helped TSU move up four spots in the coaches poll, landing at no. 20. It is ranked 20th in the STATS poll.

Grambling State moved up to no. 22, three spots from last week’s rankings, after a convincing 36-21 win over Jackson State. GSU is now 2-1 after dropping its opener to FBS Tulane.

Despite losing the MEAC’s all-time leading rusher in Tarik Cohen, who is doing pretty well himself, the Aggies could very well write themselves into the history books.

If A&T were to go through conference play without a loss it could finish the season 11-0, and a Celebration Bowl win could cap off a perfect 12-0 season. Obviously, that’s way down the line, as it has simply won out the first quarter of the season. I can already see the look in head coach Rod Broadway’s eyes when he gets asked THAT the first time this season.

But it’s not out of the question. After all, A&T has lost just two MEAC games in the past two years. At this point, its journey to Orangeburg, SC appears to be the toughest road game as it will take on traditional rival South Carolina State. Delaware State and Savannah State will be significant underdogs in Greensboro. Bethune-Cookman has shown signs that it is a better team than its 2016 version but its still a winnable game.

And it just so happens the year Howard appears to be ready to inflict some damage on the MEAC, it falls off A&T’s schedule. A&T doesn’t play Hampton this year, either.

So we could very well head into mid-November with North Carolina Central as the only obstacle between their rivals and the first perfect regular season by an HBCU since Winston-Salem State’s 2012 campaign and the first in the MEAC since Hampton’s 2004 squad.

Again, it’s still too early to tell, but it looks like the MEAC road to the Celebration Bowl will go through Market Street this season.