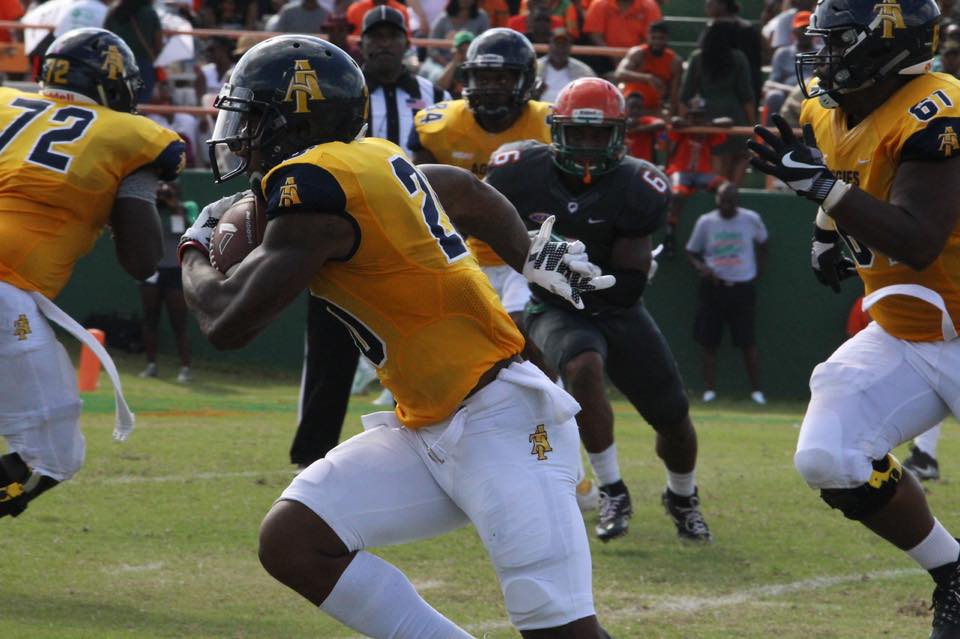 We’re nearing two full months of college football and things are slowly sifting their way out.

Week Eight is fast approaching, and as we drop the Power Rankings, reality is starting to sink in for some teams while others are still watching visions of victories and titles to come in their mind’s eye.

1. North Carolina A&T (7-0): After A&T’s 3-0 start, I predicted it had a strong chance to complete a perfect season. A month later, my prognostication is still on course to be right. A&T was able to get a solid 11-point win over a pesky Florida A&M team that appears to be a year away from contending from the MEAC title. This week it will host Bethune-Cookman, which at 3-3 might be the best team pound-for-pound it has faced this season.

2. Grambling (5-1): Grambling was idle last week after a solid win against Prairie View A&M. That bye week came right on time as they’ll face an Alcorn State team that is looking like a legit SWAC Championship and Celebration Bowl Contender.

3. North Carolina Central (5-1): NCCU took a break from MEAC play last week, coming away with a 24-17 win over Gardner-Webb to claim its 11th consecutive win at home. Freshman quarterback Chauncey Caldwell had his best game yet, throwing for 333 yards and two touchdowns and running for another. This week it takes on Norfolk State, hoping to stay in the MEAC race after a close loss to Hampton last week.

4. Alcorn State (5-2): Alcorn State took care of business against Prairie View last week, and now sets its sights on Grambling. The G-Men swept Alcorn State last year, but with a healthy team, including quarterback LeNorris Footman, this year could be a different story.

5. Tennessee State (4-3): So what, they’ve lost three of their last four games. TSU has a win against an FBS team (a bad one, but an FBS team), and three against FCS teams. No one below it can boast of a better resume and none of them play in a conference as good as the OVC.

1. Virginia State (6-0): For the first time since we started this season’s power rankings, Bowie State is not at the top of the list. VSU earned it fair and square last week, slowing Bowie State’s offense down just enough for a 47-35 Homecoming win. VSU is now in the driver’s seat in the CIAA North, and with a trip to Lincoln on the horizon, don’t expect them to budge for a while.

2. Bowie State (6-1): If I tell you your quarterback will pass for five touchdowns, you probably like your chances to win the game. Unfortunately for Bowie, that wasn’t the case as they just had no answer for VSU’s 1-2 punch of Trent Cannon and Cordelral Cook. But BSU doesn’t have long to lick its wounds as 5-2 is still in the hunt for the CIAA Northern Division title as they head to the DMV on Saturday.

3. Langston (6-0): Langston has been dominant against NAIA competition, as no team in its classification has come within 27 points of it. Things will rachet up a bit this week, as eighth-ranked Langston faces 23rd ranked Arizona Christian for Homecoming.

[postBannerAd]
4. Albany State (5-2): Despite falling behind early to Morehouse, Albany State managed to correct itself in time to win its third straight game by 20 or more points with a 34-10 win. This week ASU  heads to the bright lights of the AUC, where they will look to kick a wounded Clark Atlanta team when its down to stay ahead of the pack in the SIAC East.

5. Tuskegee (5-2): Fresh off it second FCS win of the season, ‘Skegee makes its debut on the list. Tuskegee’s offense continues to improve on a weekly basis, which should make the rest of the SIAC nervous.