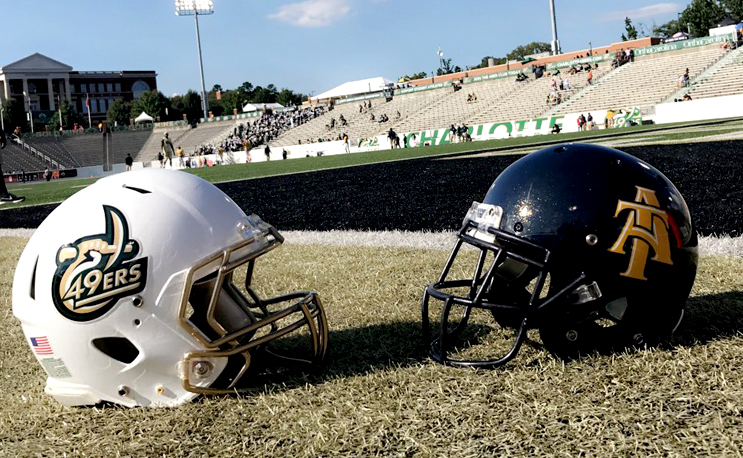 For the second year in a row A&T takes down an FBS opponent.

Franklin McCain III sealed the deal for the Aggies on Saturday night with a 74-yard touchdown after picking off Hasaan Klugh, a former A&T quarterback. Klugh transferred from A&T to Charlotte after his freshman season.

Charlotte was trailing 28-25 and moving the ball from the A&T 32 yard line when McCain made the interception with 39 seconds remaining.  If McCain’s name sounds familiar in relation to A&T it should. He’s the grandson of Franklin McCain Sr., one of the “Greensboro Four” A&T students that famously requested service at the Woolworth store in 1960. That bold move sparked the sit-in movement during the civil rights era.

Quarterback Lamar Raynard was the star early on. He had the Aggies cruising in the first half completing 13 of his first 17 passes for 244 yards.  A&t put together a 90-yard, 71-yard, and 81-yard drive to take a 21-10 lead into halftime.

Tables turn in Second Half

A&T scored first in the third quarter when Marquell Cartwright ran in for a one-yard touchdown to make it 28-10.  Cartwright had 66 yards rushing on the night.

Klugh threw a touchdown pass at the end of the third and later in the fourth to ignite a comeback. The 49ers cut the lead down to 28-25.  He later had Charlotte driving for the potential go-ahead touchdown before the back-breaking interception.  Klugh’s final touchdown pass went to Workpeh Kofa with eight seconds remaining, closing the gap to 35-31 but it wasn’t enough to change the outcome.

The boys are really a problem !!!! #AggiePride

The Aggies join Howard, who beat UNLV in week one, as MEAC teams to defeat FBS opponents this season.  Tennessee State is the other HBCU with an FBS win to their credit this year, defeating Georgia State in their first game of the season.

North Carolina A&T is now 3-0 to start the season, they play at Morgan State (0-3) next Saturday to kick off conference play in the MEAC.