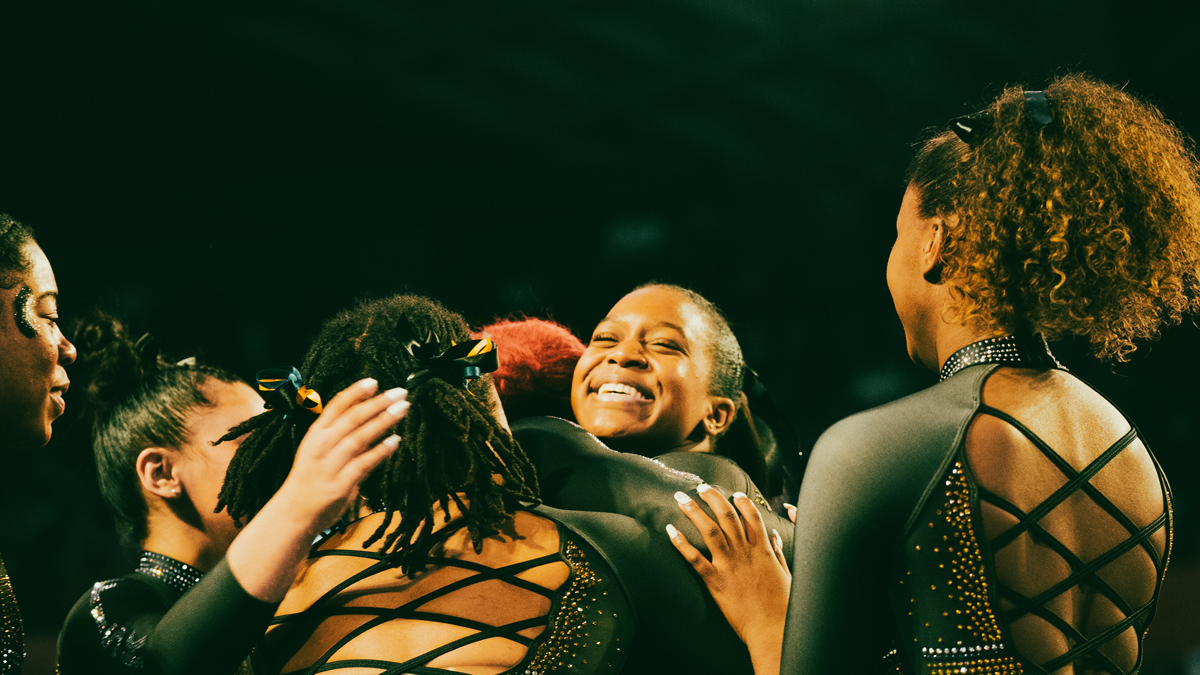 Morgan Price shelved a scholarship offer at the SEC. Instead, she’s a part of a groundbreaking Fisk gymnastics program.

Her third collegiate meet ever has just concluded and Fisk gymnastics star freshman Morgan Price has found out she won the all-around at the UGA event.

She’s in the grasp of her uncle, Glenn Reynolds, taking a selfie as the announcement is made over the PA system.

The 18-year-old doesn’t have long to reflect on her accomplishment, though. There’s a young black girl waiting patiently to take a photo with her. And another. And then more.

“Can she get a picture too?”

Suddenly, it becomes clear that Morgan Price and her Fisk gymnastics teammates are having a big impact beyond the collegiate mats.

Eventually, Morgan’s mother, Marsha, gets to share a brief moment with her. They embrace as tears of joy trickle down her face.

“I’m so proud of her. You just don’t know how hard she works. She’s just such a great young lady, and an athlete all-around,” Reynolds says.

Price was slated to go to the University of Arkansas to compete in the SEC, but changed course when Fisk announced it would become the first HBCU gymnastics program. And she left the match Monday with a 39.375 out of 40 score, showing why she was an SEC-level talent.

“The sacrifice she’s making in her career to do this thing for HBCUs. She wants to put other girls of color on the map,” Reynolds says. “I’m just so proud of her sacrifice and I Just love her. She’s a great representative of her family.”

The Price family has deep roots in Tennessee. She’s a native of Lebanon, Tennessee. Her father, Chris Price, was a star baseball player, spending some time in the minor leagues. He tragically passed away in 2009 in an automobile accident.

The family eventually moved to Texas, where Morgan became a standout gymnast along with her sister Frankie. Frankie is one of two black gymnasts on Arkansas’ 17-woman roster. Black gymnasts currently make up about 10 percent of student-athletes in the NCAA ranks, which makes the Fisk gymnastics program even more influential.

Her head coach, Corrinne Tarver, knows she has a gem in Morgan Price, who was one fall away from possibly a perfect 40 on Monday.

“She’s so confident. I mean, for her to fall was like “really?” she said after the meet. “Because she doesn’t fall in practice. She’s just a rock when it comes to that.”

The former NCAA champion appreciates Morgan’s level-headedness as much as her talent.

“I think that’s the best part about Morgan is — she’s incredible,” Tarver said. “Even though she’s scoring well, she’s up there and everyone wants to interview her and she’s just kind of that face, I guess you can say to some extent of Fisk.”

“I mean, I think we have a lot of faces, but Morgan is definitely one of them. But she’s really humble and she’s out there for her team. That’s what she cares about, is helping her teammates, helping this program to grow and get better.”

Ten minutes have passed and the gymnastics team is still being swarmed by family, friends, well-wishers and people who want a picture with the history-making squad.

There is a group of young ladies amongst the crowd with shirts on that said “Future HBCU Gymnasts.” An even younger child, Trazilyn, found her way on to the mat that the Fisk jumpers had just used as her mother was trying to get her a photo op with the Fisk team.

“It was the most important thing I ever imagined,” Motika Collins said. “I used to do gymnastics. I really enjoyed it.”

Marsha Price is standing a few feet from her daughter, filming as girls and women — and men — come up to her daughter to share a word of encouragement or take a picture. She takes it all in and brims with pride as she snaps a photo with a seasoned woman in a Florida A&M sweatshirt.

“This is amazing,” she says softly.

Indeed it is. The Fisk gymnastics team is more than just a competitive unit of individuals. These young women are an inspiration to many people, transcending age, gender and many other lines. It was true in Georgia, and it will likely be the case every Morgan Price and her teammates go.

Fisk will host its first-ever home meet on Friday in Lebannon, TN.

136
The Latest in HBCU Sports and Culture