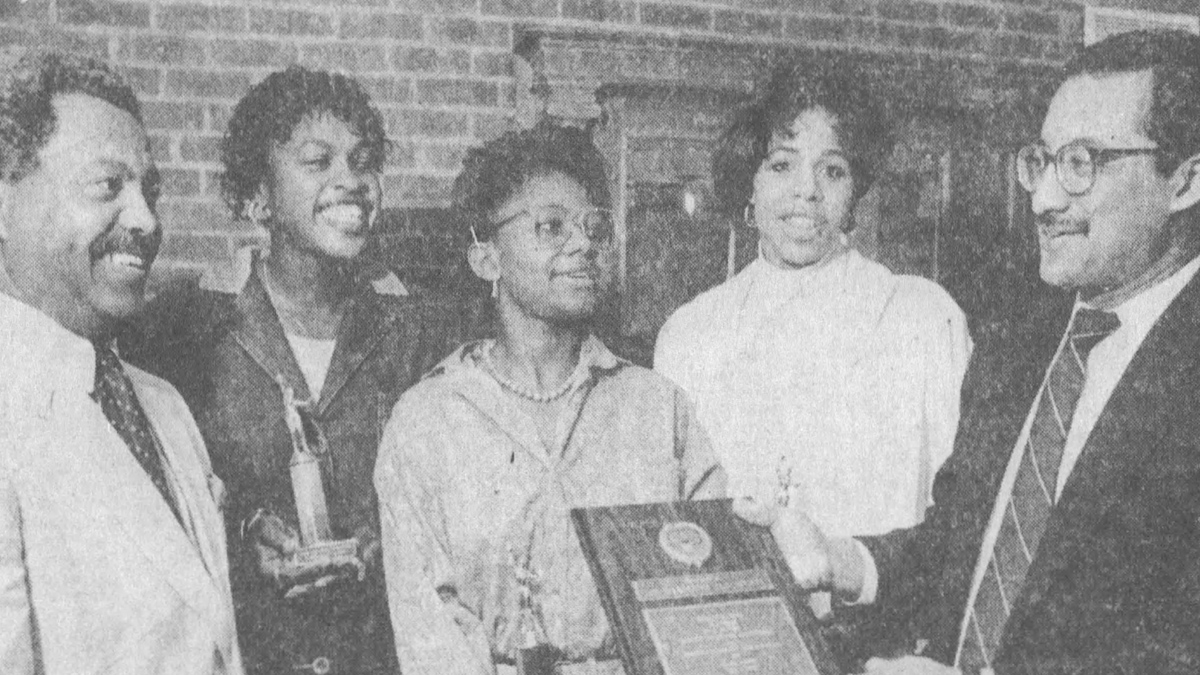 CIAA to induct all-woman class into Hall of Fame

The CIAA is inducting an all-woman Hall of Fame Class for 2023.

“In this Title IX 50th year of acknowledging the women and trailblazers who have advanced women in CIAA sports, it’s an honor to recognize and celebrate the women of the class of 2023,” said Commissioner Jacqie McWilliams. “Each one of these recipients and their teams has made a significant impact in their respective sport. They have left a legacy and developed leaders who have also made significant impact in their communities as well. I salute you all, I could not be prouder, it is a privilege to share in this momentous occasion!”

Since its inception in 1967, the CIAA Hall of Fame has enshrined 304 honorees. It was renamed after legendary coach and administrator John B. McLendon in 2000. A 1978 Hall of Fame inductee, McLendon is also credited as one of the founding fathers of the CIAA Basketball Tournament, which began in 1946.

Allyson (Hardy) Dobbins | Bowie State University | Women’s Basketball | Student-Athlete
Dobbins starred at Bowie State University from 2001-2005, where she was a four-year letterwinner, four-year starter, and two-time CIAA Player of the Year (2003 & 2005). Dobbins was also a two-time All-CIAA selection and a three-time selection to the All-CIAA Defensive Team. Dobbins was thrice named a Kodak Division II All-American (2003, 2004, & 2005).

A 2015 inductee into Bowie State’s Hall of Fame, Dobbins is the Bulldogs’ all-time leading scorer with 2,107 points scored and she averaged 19.3 points per game (109 games played/105 starts). Dobbins once scored 50 points (20-of-34 field goals) against St. Augustine’s in an opening-round game of the 2004 CIAA Basketball Tournament. In 2005, Dobbins averaged 22.8 points per game, second best in the conference and sixth best in NCAA Division II Basketball, while shooting 44% from the field and 86.4% from the free throw line. She topped 30 points six times that season. Dobbins ranks sixth all-time in CIAA history in points scored and her 478 assists and 359 steals also places her in the top 10 all-time.

After graduation, Dobbins became just the second Division II player from an HBCU to play in a WNBA game. She would go on to play 12 seasons professionally across six countries in Europe. While playing overseas, Dobbins also found the time over the summer to hold free basketball camps for the youth at the Bowie Recreation Gymnasium. Currently, Dobbins is a coach with the Jr. Celtics, the youth basketball development program for the NBA’s Boston Celtics.

In her last two seasons (2004 & 2005), Hawkins guided the Bears to consecutive undefeated marks (16-0 each season) in conference play and went a combined 54-4 overall. In 2005, Hawkins led Shaw to a 28-1 record and finished the regular season ranked No. 2 in the country by USA Today and ESPN. For her career, Hawkins amassed 863 points, 468 rebounds, 384 assists, and 323 steals while only losing one total conference contest.

Currently, Hawkins serves as an Assistant Women’s Basketball Coach for the Bears under her former head coach Jacques Curtis.

Elorine Hill | Fayetteville State University | Volleyball & Tennis | Coach
Hill’s CIAA journey began as a student-athlete at St. Augustine’s College (now-University), where she was an outstanding track & field athlete. During her collegiate career, Hill was a three-time All-American, national champion in the shot put, District 26 champion, and a member of St. Augustine’s track teams that won the CIAA Indoor and Outdoor Championships and the NCAA Indoor and Outdoor Championships. Graduating in 1987, Hill was inducted into St. Augustine’s Hall of Fame in 2007.

Hill coached volleyball, tennis, women’s basketball, and men’s & women’s cross country at Fayetteville State. She is credited with starting both the cross country program and women’s tennis program at FSU. Hill coached cross country from 1989-1994, women’s tennis from 2002-2008, and volleyball from 1991-2008. She was an assistant women’s basketball coach from 1992-2002. Her lengthy list of accolades includes eight CIAA Championship Championships (five in tennis and three in volleyball) and seven CIAA Coach of the Year honors (four-time Volleyball Coach of the Year and three-time CIAA Tennis Coach of the Year). In total, Hill coached 76 All-CIAA selections and five CIAA Player of the Years. She is the Broncos’ winningest coach in volleyball program history with 331 overall victories, including 202 wins in conference play and 12 winning seasons.

In tennis, Hill earned five conference titles and was a three-time CIAA Tennis Coach of the Year (2002, 2003, & 2007). In 2002, the first year of women’s tennis at Fayetteville State, Hill earned the Broncos the inaugural CIAA women’s tennis title, en route to a four-peat from 2002 to 2005 in the program’s first four years. Hill earned her fifth title in 2007.

Hill gave 20 years of service to Fayetteville State and was a one-time Teacher of the Year in the Department of Health, Physical Education, and Human Services at FSU. Hill’s legacy is still strong in the CIAA evidenced by coaches like Reeshemah Johnson. Johnson was Hill’s former student-athlete and assistant volleyball coach (1998-2000) and took over the volleyball program as head coach in 2009, where Johnson enters her 13th season.

Professionally, Pierre was a two-time U.S. Champion in the indoor 60-meter dash, winning in 2013 and 2016. In 2013, Pierre ranked as the fourth fastest sprinter in the world (her highest ranking) in the 100-meter dash. She won a World Indoor Championship in the 60-meter dash in 2016. She was a four-time medalist at the Pan American Games, where she ran for the United States, including a gold medal in the 2015 4×100 relay and two silvers in 2011. She currently holds the Pan American Games 100-meter record that she set in 2015. While still attending St. Augustine’s, Pierre represented her native country of Haiti at the 2008 Beijing Olympic Games.

In the 1988 NCAA Tournament’s National Semifinals in Fargo, ND, Hampton took down North Dakota State 72-63. In the finals, the Pirates defeated a No. 1 overall West Texas team that had won 33 consecutive games. Hampton also downed District of Columbia, Virginia State, and Pittsburgh-Jonestown in the NCAA Tournament.

Starting the season on a 28-game winning streak, Hampton’s only blemish was in the CIAA Championship game, a 73-80 loss to Virginia State. The Pirates advanced to the conference title game by defeating Elizabeth City State in the semifinals.

The 1987-88 team was led by All-CIAA selections and future CIAA Hall of Famers (inducted in 1999) Jackie Dolberry and Venise Frazier. Dolberry was a three-time CIAA Player of the Year, a 1988 Kodak All-American, and a BCSIDA Player of the Year after averaging 24 points per game in her junior season. She was also named the Most Valuable Player of the NCAA Tournament and she was joined by Frazier and Karen Drewry on the All-Tournament team. With 2,645 career points, Dolberry is the leading scorer in Hampton history and CIAA history. She is also in the top 10 in the CIAA in career rebounds and steals.

As a team, the Pirates averaged 98.9 points per game, including 18 games of 100-plus points and a 140-point outburst in a regular season game against Elizabeth City State.

CIAA to induct all-woman class into Hall of Fame