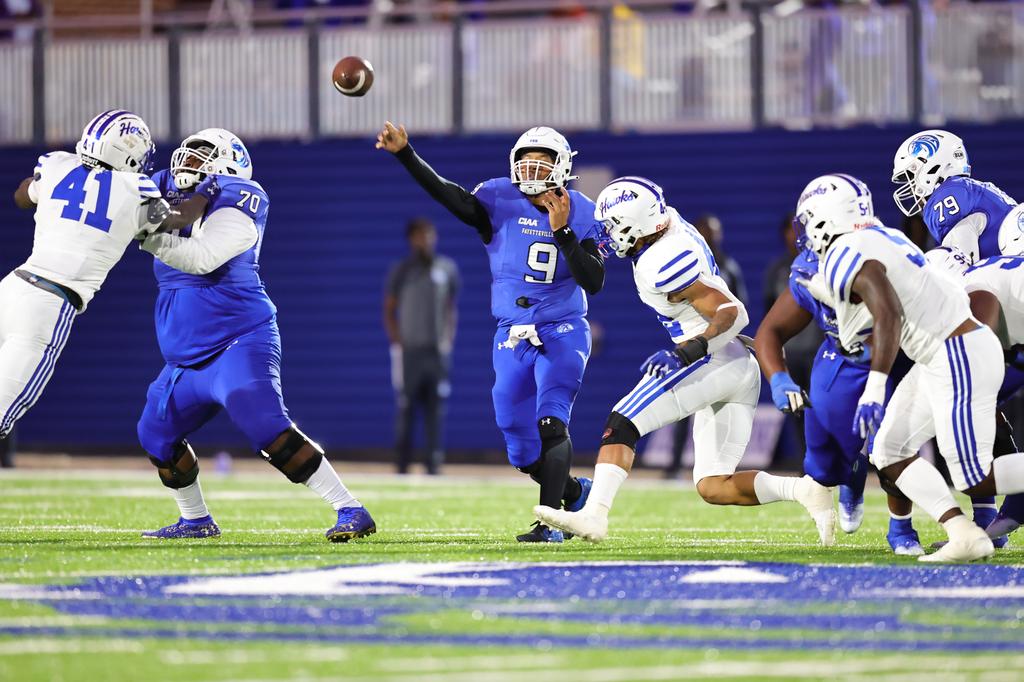 A new football champion will be crowned in the CIAA title game. The outcome will have some bearing on who plays on in the NCAA Div. II playoffs.

This week’s HBCU Football Rundown will target new football champions to be crowned in the CIAA and SIAC. After ten weeks of regular season play, it has all come down to this!

This week’s HBCU Football Rundown breaks down the championship game match ups by their 2022 schedules, history and statistics.

As HBCU Gameday noted back at the beginning of the season, the departure of head coach Damon Wilson from three-time champion Bowie State opened the door for a new champ in the CIAA in 2022. That’s where we’re headed this weekend.

This will be the fifth straight trip for Fayetteville State and sixth-year head coach Richard Hayes Jr. to the championship game. Hayes is looking for his first win in the title contest. FSU lost the title game in 2017 to Virginia State and has lost in the last three championship games (2021, 2019 and 2018) to Bowie State.

Hayes has followed in the footsteps of his uncle, Black College Hall of Famer Bill Hayes, who took five straight Winston-Salem State teams (1983-87) to the CIAA title game. Like Bill Hayes, who also lost four straight championship game match ups before winning, Richard Hayes hopes to make his fifth trip the charm. Hayes and the WSSU Rams defeated Hampton 22-12 in the 1987 title game.

The FSU offense and defense

To get this proverbial monkey off his back, Hayes has to get more out of his offense that has primarily been playing freshman Caden Davis and redshirt freshman Damari Daniels at quarterback.

Senior QB K’hari Lane who began the season as the starter and was the preseason all-CIAA first team quarterback, has not played much since a 13-10 win over Chowan on Sept. 29. Lane threw three interceptions in the Broncos’ 31-28 loss to Virginia Union a week earlier.

In the 13-10 FSU win over Chowan earlier this season, Lane hit on 6 of 16 passes for 92 yards and one TD, a third-quarter 52-yard pass to wideout Barry Elliot. The Broncos forced five Chowan turnovers and registered five sacks of starting QB Caleb Pierce, three by Cameron Merrell and two by Devin Cowan.

Merrell (74 tackles, 8.5 sacks) and Cowan (55 tackles, 8 sacks) are the defensive leaders. The Broncos have the stingiest defense in the league surrendering just 12.8 points per game.

Since becoming the starter in an Oct. 15 date at Virginia State, McKee has led the Hawks to a homecoming win over VSU (43-40), a win on the road at three-time defending conference champion Bowie State (21-15), a tough victory on the road at then undefeated Virginia Union (26-21) and a closeout 54-8 home win over Elizabeth City State.

In those four wins, McKee has passed for 756 yards (189 ypg.) and eight touchdowns with three interceptions. He has run for 332 yards (83.0 ypg.) and three TDs over those games.

Grad linebacker Montre Moore has been the ringleader on defense racking up 37 tackles (9.2 per game) during the four-game win streak. He paces the Hawks with an even 100 tackles on the season that is tops in the CIAA.

Based on the recent play of both teams, Chowan may be slightly favored.

The SIAC coaching match up

Ruffin, who spent ten years leading Miles of the SIAC before moving over to Tuskegee this season, brought championship tradition with him. At Miles, he led the Golden Bears to four SIAC titles and six division titles as the most dominant team in the West. He is returning Tuskegee to the championship game for the first time since 2017.

The much-traveled Berry has the Tigers undefeated, nationally ranked (12th in d2.football Top 25, 8th in the AFCA Div. II Coaches Poll), ranked first in Super Region II. and in the SIAC championship game for the first time in program history in only his second year at the helm.

Berry was an assistant at seven HBCUs before getting his first head coaching assignment at Benedict. Despite their undefeated record, Berry, whose squad knocked off defending conference champion Albany State en route its perfect regular season, thinks his Tigers have not played their best game.

The statistical match up

Benedict has certainly been the most dominant of the two on the season. Statistically, Benedict tops the SIAC in three key categories (scoring, total defense and pass defense) and is no worse than fifth in eight major statistical categories.

Tuskegee is not in the top five in any of the eight categories.

Benedict certainly has the edge in terms of how they’ve played this season. And, the Tigers are playing at home. But don’t count Ruffin’s troops out.

What’s left now are the games to be played and the outcomes to be determined. Those outcomes will have some bearing on which teams will play on in the Div. II playoffs.

Entering Saturday’s championship games, undefeated Benedict (10-0) is ranked first in Super Region II of NCAA D2.Of the other ranked SIAC teams, Fort Valley State is seventh and Tuskegee is ninth. Neither Fayetteville State or Chowan is ranked in the top ten of the region. Only 9-1 Virginia Union out of the CIAA is in the top ten at fourth.

Both the CIAA and SIAC teams are in Super Region II along with teams from the South Atlantic Conference (SAC) and the Gulf South Conference (GSC). Delta State (No. 2), West Florida (No. 3) and West Georgia (No. 10) are in the Gulf South. Wingate (No. 5), Mars Hill (No. 6), and Limestone (No. 8) are in the SAC. Each will finish out their regular seasons this week.

Only seven teams from Super Region II and seven from each of the nation’s four Super Regions will make the 28-team Div. II championship playoff field.

More than likely, Benedict and Virginia Union are safe to get into the playoff field.

The Citadel vs. VA-Lynchburg in Charleston, SC 2p