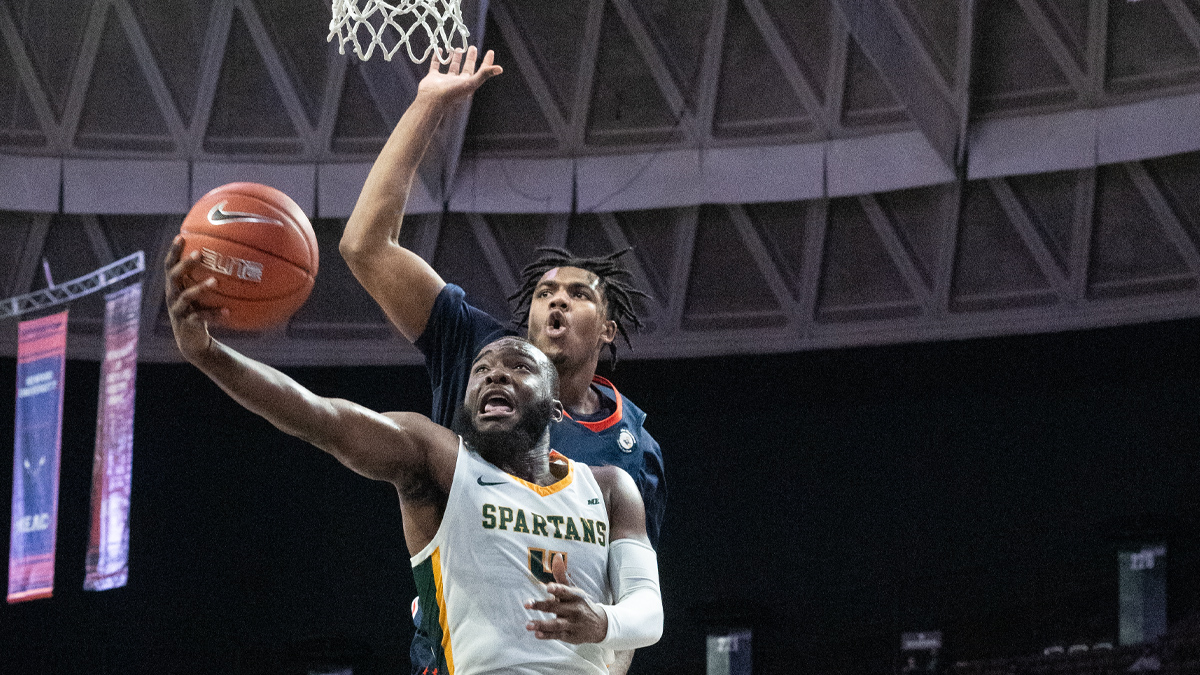 NORFOLK, Va. – The Norfolk State men’s basketball team cruised to blowout victories in its first two games of the season, but the Spartans must now prepare for an astounding test, facing two AP top-ten nationally ranked teams on the road in a span of four days.

NSU (2-0) first heads to Waco, Texas to battle No. 5 Baylor (1-0), a familiar opponent. The Spartans’ 2021-22 campaign came to an end at the hands of the Bears in the NCAA Tournament, making this a potential revenge game of sorts for Norfolk State. The rematch will tip-off at 8 p.m. (ET), airing on ESPN+.

The Spartans will head straight to their next destination, with a 10 p.m. matchup looming on Monday with No. 8 UCLA. The first-ever meeting between the Spartans and Bruins will air on PAC-12 Networks.

Norfolk State used a fiery start to defeat Cairn 87-59 at home on Wednesday night, the team’s second win in three days. The Spartans scored the first 19 points of the contest, eventually earning a 33-3 advantage shortly after the midway point of the first half.

Christian Ings, Dana Tate Jr., and Cahiem Brown all also added sixteen points, while reigning MEAC Player of the Year Joe Bryant Jr. scored 15. Ings capped off the night with an emphatic fastbreak dunk, bringing the crowd to its feet in Echols Hall.

Norfolk State, a 16-seed, faced the No. 1 seed Bears in the first round of the NCAA Tournament last season, after the Bears had won a national championship the year prior. Baylor pulled away for an 85-49 victory in Fort Worth, Texas, just under 90 miles from Baylor’s campus.

Bryant Jr. led the Spartans with 15 points in that game, also tying a team-high with five rebounds. Terrance Jones provided a boost off the bench during a career-high 24 minutes of playing time, scoring nine points, and rising for a strong slam late in the second half.

Baylor returns most of an impressive roster to the 2022-23 campaign, led by redshirt senior Adam Flagler. The 6-3 guard earned second team All-Big 12 honors last year, leading the conference with a .433 3-point percentage in league play. Highly touted recruit Keyonte George, the Big 12 Preseason Freshman of the Year, rounds out the backcourt with immense talent, scoring 13-points in his debut on Monday.

The Bruins are guided by preseason All-American Jaime Jaquez Jr., who averaged 13.9 points and 5.7 rebounds per game last season. Jacquez made seven of his nine shots against Sacramento State on Monday night, only to be outdone by teammate Jaylen Clark’s perfect 7-of-7 performance for 17 points.