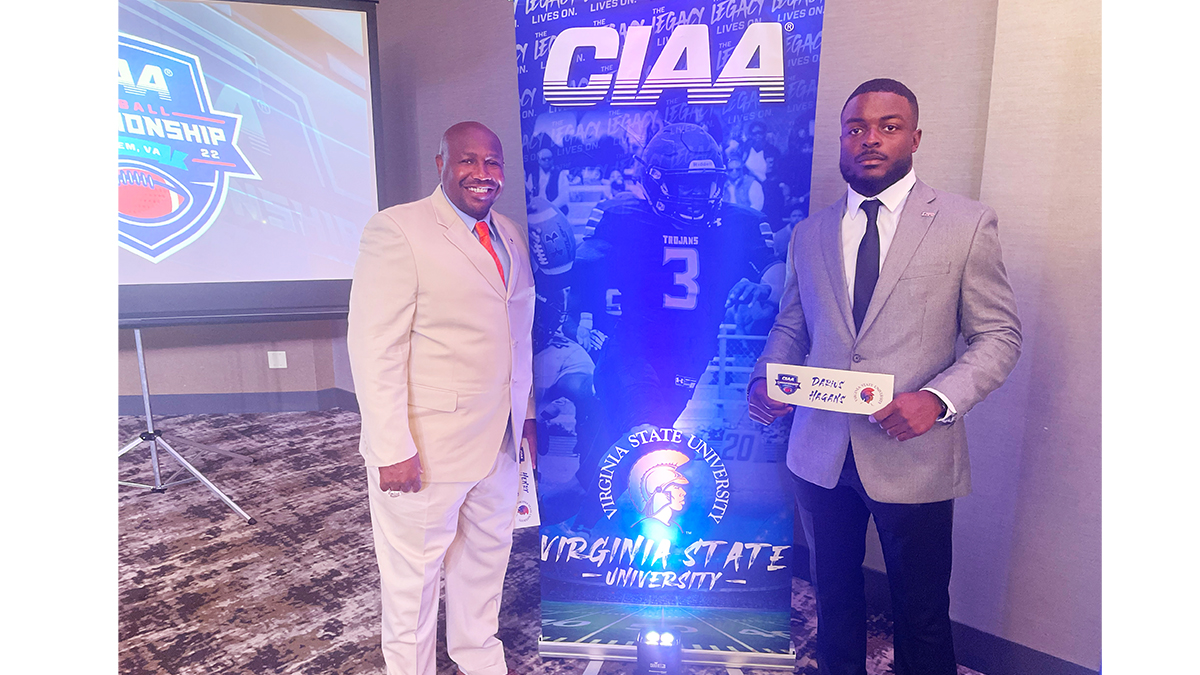 Dr. Henry Frazier III (l.), who helped build Bowie State into a CIAA power, is back in the conference as head coach at Virginia State. He appears here at Wednesday’s CIAA Media Day with VSU junior running back Darius Hagans (r.). Frazier is one of four new coaches in the CIAA.

With a new head coach at three-time defending champion Bowie State, the door may appear open for someone other than the Bulldogs to take the CIAA football championship.

That was perhaps the feeling Wednesday for head coaches and players at the 2022 CIAA Media Day at Roanoke’s Holiday Inn Valley View.

Damon Wilson, who led Bowie State for 13 years, has moved to Morgan State with former linebackers coach Kyle Jackson taking the helm of the Bulldog program on an interim basis. Jackson says, ‘not so fast’ to the rumors of BSU’s impending demise.

“The biggest key is setting the standard of expectations,” Jackson said. “When I talk to the guys, I let them know the standard is the standard regardless of who’s here, who’s not here.”

Jackson is a former middle linebacker who played under Wilson in 2009 and 2010 and joined Wilson’s coaching staff in 2017. He also echoed his former mentor’s mantra of ‘tradition never graduates.’

“Things are not going to change much,” Jackson said of his 12-2 team that was undefeated in conference play (8-0) and won an unprecedented two games in the NCAA Div. II playoffs to reach the national quarterfinals.

“We saw how far we could really go (last season). It opened a lot of eyes to the potential the Bowie State program has. A lot of those guys are returning.”

Chief among the BSU returnees is Joshua Pryor, a 6-4, 260-pound senior defensive lineman who accompanied Jackson to the proceedings. Pryor had his three championship rings prominently displayed on his fingers.

Pryor would likely have been the league’s preseason defensive player of the year had one been chosen. Often facing double teams, he posted 73 tackles, six sacks and 21.5 tackles for 84 yards in losses last season. Pryor has 28.5 sacks, 66 tackles for losses of 343 yards in his three seasons at BSU.

“I will have double-teams, they’re going to run away from me,” Pryor said, “but I know my guys are going to be there at the end of the day. We all have our job to do and that’s execute.”

On offense, Jackson has to find replacements for two-year starter JaRome Johnson at quarterback and 1,000-yard rusher Calil Wilkins.

Bowie State’s chief challenger in the North Division may come from a source familiar with the Bulldogs’ tradition.

New Virginia State head coach Dr. Henry Frazier III could be considered the architect of the Bowie State program. Frazier was a successful quarterback for the Bulldogs from 1986-89 and served as head coach from 1999 to 2003 where he coached Damon Wilson.

He moved to Prairie View A&M from 2004 to 2010 and won the SWAC championship in 2009. Frazier spent two years at NC Central in the MEAC before returning to help Wilson as a special assistant during the 2018 and 2019 championship years. He replaced Reggie Barlow at VSU late, in May of this year.

“I have experience with that,” Frazier said of his late arrival. “I got the Bowie (head coaching) job on July 22 and we still had a winning season. So I figure we’re ahead of the curve right now.”

Frazier also said Barlow did not leave the cupboard bare. “It’s not empty. There’s players and talent there. Walking into this situation is my best situation in terms of Bowie, Prairie View or (NC) Central. Coach Barlow and his staff did a good job of signing a pretty good class, 23 or 24, we brought in another ten freshmen and another 12 to 15 transfers on top of that. So, we’ll have players. It’s just a matter of them following my lead.”

Virginia Union has been the closest to dethroning Bowie State in the North. The Panthers finished 12-5 in the division over the last three seasons under Dr. Alvin Parker, finishing second, a game behind Bowie State twice (5-2 last season).

“That’s the game (vs. Bowie State) that’s been stopping us every year,” Parker said. “We win that game any one of the three years and we’re playing in Salem (site of the championship game). We feel good about what we’re doing and we have a process at Virginia Union that’s tried and true. It creates championships.” The Panthers play at Bowie State this season on Oct. 15.

Coach Parker brought along sophomore running back Jada Byers (914 yds., 5.4 yards per carry) who led the league with 12 rushing touchdowns. He earned offensive freshman of the year honors. “I feel this is the season we get it done,” Byers said.

Marcus Hilliard is the new coach returning to lead his alma mater, Elizabeth City State. The Vikings have not had a winning season since 2012. Hilliard played for former ECSU coach Waverly Tiller in the early 2000s when the Vikings were perennial contenders for N. Div. and conference honors. He has been a defensive guru at both ECSU and VUU and wants to return ECSU to its former standing. The 2022 theme for the Vikings is ‘Restore the Culture, A new era at ECSU football.’

“Coach Hilliard has come in not just to create a football team that is going to compete on Saturdays but build a program that can compete for years to come,” said Zion Riddick, ECSU’s all-CIAA kick returner and wide receiver.

Hilliard was the defensive coordinator on that 2012 ECSU team that made it to the championship game. “We had a good run before,” Hilliard said of his time playing and coaching with Tiller. “Putting my impact on the team and bringing back some of the good things we did in the past, that’s my goal. We’ve been down, so we’re trying to change the infrastructure. I just want to put my stamp on that.”

Chowan, particularly in the last two seasons with Bryce Witt at quarterback, has been an offensive juggernaut and threat in the North. The Hawks led the CIAA in total (432.2 ypg.) and scoring offense (38.5 ppg.) last season.

Lincoln enters its third season under Josh Dean coming off a 1-9 season, 1-6 in the CIAA. The head coach said he’s taking on more responsibility this season. Junior defensive back Eric Best said he believes the team is coming together

The real chasers of Bowie State are again led by head coach Richard Hayes’ Broncos of Fayetteville State. After dominating the South Division, FSU has fallen to the Bulldogs in the CIAA championships game in each of the past three campaigns. They have won four straight S. Div. titles.

FSU will feature the league’s top returning quarterback, Khari Lane, who was voted the preseason all-CIAA quarterback. Lane threw for over 2,000 yards with 20 TDs and only five interceptions. Brandon Barnes-Bowman (5 ints.) leads the defense.

Sixth-year head coach Adrien Jones has guided Shaw (6-4, 5-2 S) past Winston-Salem into second in the S. Div. behind FSU. The Bears are 0-5 during Jones’ tenure vs. FSU including a close 15-12 fourth-quarter loss a year ago.

“They (the offensive line) were the MVPs of our team,” Jones said. “We’ve got a lot of toys on our offense. We’ve got to be dynamic in anything we do, offense, defense and special teams.

“I think that we have the football team to beat Fayetteville State but we’re gonna have to play disciplined football, we’re going to have to be smart coaches and put out our guys in the right situations at the right time.”

Winston-Salem State and others

After two seasons, Robert Massey had the interim tag removed and plans to get Winston-Salem State back to elite status. That development has helped the Rams, in effect, start over.

“We have additional coaches added to the staff, obviously that we needed,” Massey said “It’s (having the tag removed) helped us from the recruiting standpoint. It’s put us in position to bring in about 40 freshman. We’ll bring in about 20 transfers. We want to build this program, basically starting over. But at the same time, we want to compete for a championship.”

Maurice Flowers enters his first season leading JCSU. The former Fort Valley State head man is returning to his alma mater and his hometown of Charlotte, NC. Flowers said he’s brought in 55 freshmen to turn the Golden Bulls program around. He will feature all-CIAA graduate wide receiver Reggie Bryant who hauled in 49 catches for 693 yards and seven TDs a year ago.

Sean Gilbert enters his second season leading Livingstone. He said a new blue turf is ready for the Bears’ stadium while construction on a new track is being finished. He said his young and green team should be better and more competitive. Sophomores Jade Echols at middle linebacker and Malik Head at defensive tackle are the top defenders. Andrew King is a key transfer.

David Bowser enters his second season with double-duties of athletics director and head football coach at St. Aug’s. He hopes to shore up a defense that gave up 218 rushing yards and 33.4 points while scoring just 11 points per game last season. Defensive tackle Marcus Davis, the student body president, and sophomore cornerback Jeron Hinton are leaders on that side of the ball. Soph QB Christopher Perkins leads the offense.