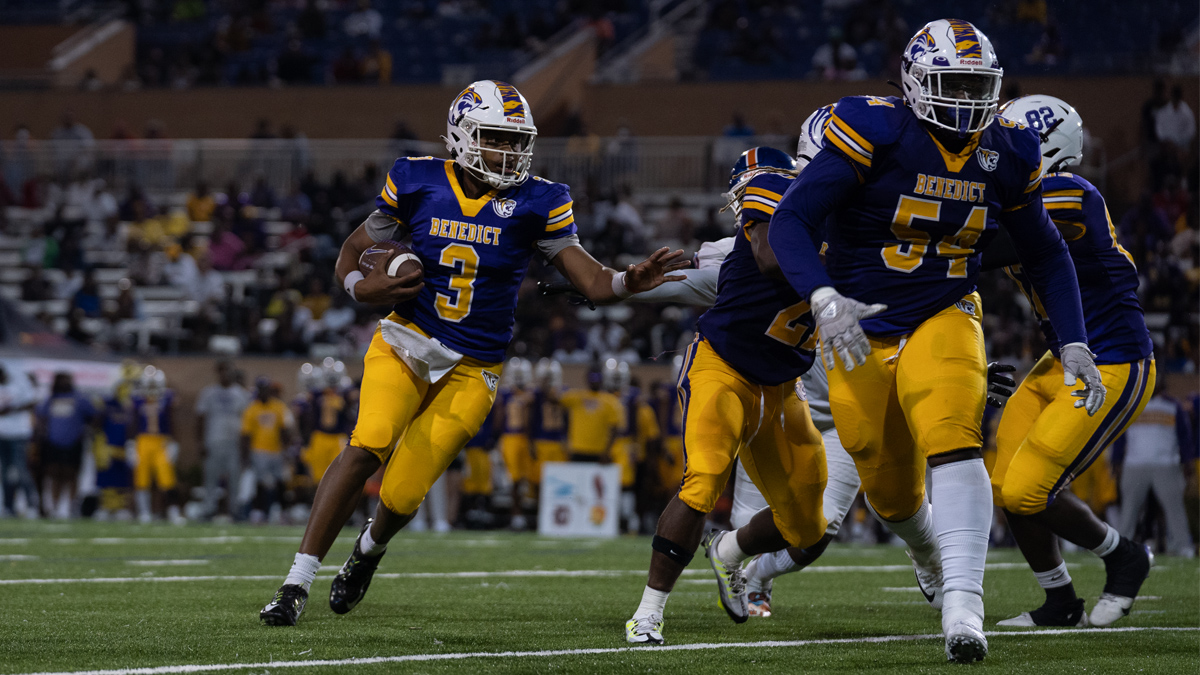 Chennis Berry didn’t exactly predict that Benedict would have an unbeaten season and reach the SIAC championship game, but the head coach had an idea at the start of workouts that he had a contender. All it took was the team sharing in the book “Chop Wood, Carry Water.”

The book by Joshua Medcalf tells readers “How to fall in love with the process of becoming great.” Berry had his players read and make a presentation on one of the chapters on each night in the preseason, It was that activity that set the stage.

“I knew in training camp we had something special,” Berry says. “:One of our team leaders got in front of the team. He said, ‘Man, you know I really feel something special about this team.’ This is before any game has been played.

“About two weeks into training camp, I said this is a special team. We got a chance to have a really good year.”

What was a hope in August is now the reality in November. The Tigers, who won the Eastern Division of the SIAC, will play Western Division winners Tuskegee (8-2, 7-0 SIAC) on Saturday in Columbia. Including the last two games of 2021, Benedict is on a 12-game winning streak.

Some of the success can be tied to the return of quarterback Eric Phoenix. The junior from Savannah, Georgia, missed three games in 2021 because of an ankle injury. He returned to action in the team’s Homecoming loss to Morehouse, throwing for 289 yards but suffering four interceptions. The next week, Phoenix completed 27 of 34 passes for 280 yards with three touchdowns and one interception as a late field goal helped Benedict beat Clark Atlanta.

Phoenix finished last season with 334 yards passing in a 34-30 victory over Lane, taking the team to a 5-5 record. So far in 2022, the SIAC All-Conference performer of a year ago has completed 64 percent of his passes this year for 1,439 yards and 12 touchdowns with just three interceptions which Berry says resulted from a failed Hail Mary pass and two throws that went off receivers’ hands.

“I think more that anything, Eric understands that he’s a very talented individual,” Berry says. “But it wasn’t last year. He had to learn it. He didn’t have to do it all himself. You know he can distribute the ball to them and manage the offense and don’t turn it over.”

Sophomore Reggie Harden has caught 18 passes, four for touchdowns, and Jayden Thomas leads with 22 catches and three touchdowns. In all, 22 different Tigers have caught a pass this year, and that includes backup quarterback John Lampley.

The backfield combination of Noah Zaire Scotland and Deondre Duehart has surpassed 1,000 yards and accounted for 14 touchdowns, allowing Phoenix to save his legs, although he has 128 yards rushing.

“It’s really a thunder-and-lightning show,” Berry says of the two backs, “They’ve been off with some injuries here and there, but they’re back now, they’re 100 percent, they’re ready to go. So, those guys are going to get the bulk of the carries.”

Benedict is scoring 31 points a game, but the defense has been quite stingy this fall, giving up an average of eight points per contest. Berry is celebrating that unit. One of the anchors is defensive end Loobert Danelus, who has 32 solo tackles, 16 tackles for loss and 10 sacks.

“Our defense has really carried us this season. This is the strength of our team,” he says. “They’ve really been dominating the line of scrimmage.”

By contrast, Tuskegee is scoring 23 points a game but giving up an average of three touchdowns an outing. The disparity between the defenses isn’t letting Berry get ahead of himself.

“If anybody has been following HBCU football … (they) know that Tuskegee University is one of the more traditionally strong programs in the country,” he says. “Second thing, they’re led by a winning head coach. Coach Ruffin has not only won at ‘Skegee. He won when he was at Miles and he’s back at ‘Skegee, so he’ll have his team prepared and ready to go.”

It has been the Benedict College mantra to look no further than the game they’re playing and finish at 1-0 when times runs out. The process repeats itself each week, and now it begins and ends with Tuskegee, and the goal of success lies within their grasp all because players had to read a book and understand what it means. And Berry says the Tigers could have been even better.

“We’ve played some pretty good ball this year. We feel like we left some opportunities out there offensively, defensively and special teams,” Berry says. “If we would have just (done) that or finished the game stronger, it could have been, well, a more positive outcome than what they were. So, the beauty of the whole deal is although we won every game, we hadn’t played our best football yet.”