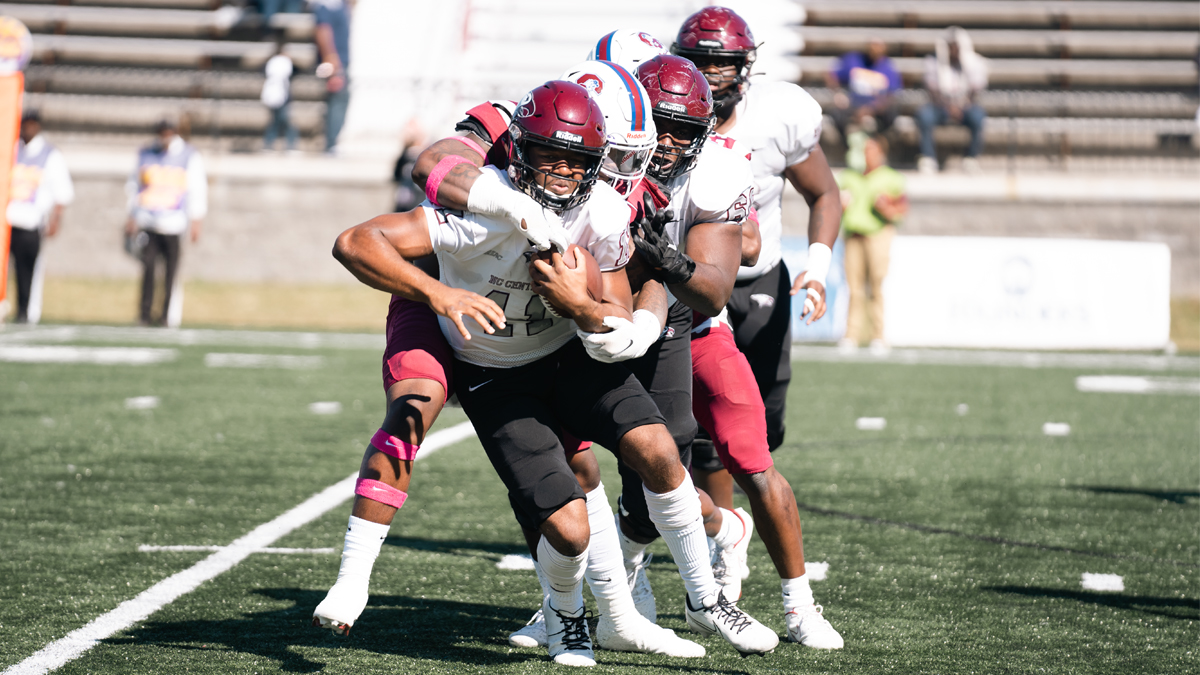 Three teams remained undefeated and races in all the conferences are heating up in the October 22 edition of the HBCU Football Rundown.

• JACKSON STATE GETS BY CAMPBELL TO REMAIN UNDEFEATED!

JSU QB Shedeur Sanders (23 of 31) threw for 231 yards and a touchdown but was picked off twice, once in the red zone.

JSU RB Sy’Veon Wilkerson ran for 116 yards on 24 carries but also fumbled inside the Campbell 10-yard line that kept JSU from pulling away.

The Panthers moved a step closer to the CIAA North division title and a spot in the Nov. 12 league championship game with the win. VUU has a big showdown with Chowan (5-3, 5-1 CIAA N) next week (Oct. 29) in Richmond for the division title and spot opposite the S. Div. champ in the title game.

Benedict (8-0 5-0 SIAC E) stayed undefeated and spoiled homecoming for a third straight opponent in shutting out Morehouse 35-0 before a Maroon Tigers’ homecoming crowd of 9,200.

• SC STATE GETS BY NC CENTRAL IN MEAC SHOWDOWN!

The back-and-forth affair saw NCCU get the ball three more times in the fourth quarter but was unable to put points on the board. SCSU stopped the drives with a sack, an interception and a turnover on downs.

• CHOWAN WINS AT BOWIE STATE, SETS UP SHOWDOWN WITH VUU!

CU QB Rashad McKee (17-33-0), in his first start, passed for 270 yards and three touchdowns and RB Nijere Peoples led the rushing attack with nine carries for 97 yards in the win. Wide receiver Laurence King hauled in six receptions for 114 yards including a 73-yard touchdown that opened the scoring.

BSU QB Larry Williams’s second rushing TD put the Bulldogs up 15-13 with 6:19 left. McKeee hit WR Malik Tobias on the first play after the score for a 61-yard scoring pass that proved to be the game winner. BSU got the ball back twice and drove to the CU 18 on its final possession before turning the ball over on downs.

The win sets up a showdown with Virginia Union next week in Richmond for the CIAA North Division title. HBCU football purists be on alert.

The win clinches the at least a tie for the Broncos’ fifth straight S. Div. championship. They can clinch the outright title with a win Saturday (Oct. 29) at home vs. Shaw or on the road at Winston-Salem State on Nov. 5.

TU quarterback Bryson Williams threw (12-17-1) for 218 yards and three TDs and ran for two other scores, including the game-winner, accounting for all five Golden Tiger touchdowns in the win. Six-two, 190-pound freshman wide receiver Antonio Meeks (6 rec., 141 yds.) hauled in two of the TD receptions covering 58 and 30 yards.

In its final possession, Lane drove nine plays to reach the TU 46 before turning the ball over on downs.

Redshirt senior quarterback Jalen Fowler (19-30-0) threw for 297 yards and a career-high four TDs as North Carolina A&T went on the road and subdued Robert Morris 38-14 in a Big South contest.

•  TENNESSEE STATE MOVES TO 2-0 IN OVC WITH WIN OVER EASTERN ILLINOIS!

Junior quarterback Draylen Ellis completed 27 of 36 passes for 309 yards and three TDs without an interception as Tennessee State (3-4) won its third straight game to move to 2-0 in the Ohio Valley Conference with a 37-17 win over Eastern Illinois.

Ellis connected with three different players for the scores, two in the last three minutes of the first half as TSU built a 27-0 lead at the break. Kaleb Mosley added 46- and 42-yard first half field goals. Mosley added another 42-yarder in the fourth period after EIU scored two touchdowns.

TSU is tied with Southeast Missouri at 2-0 in the OVC behind UT-Martin (3-0).

Riddick and Alcorn State’s Aaron Allen had the most prolific day. Riddick was the only passer to top 400 yards. Allen threw for 396 in a loss to Texas Southern.

Virginia Union sophomore Jada Byers continued his torrid pace as he ran 40 times for 187 and four TDs in a win at Lincoln (Pa.). Byers now has 1,560 yards, 195.0 yards per game, thru eight games with two games left in the regular season. He leads all of NCAA Div. II football in both rushing yards and rushing yards per game and is tied for first in rushing touchdowns with 18.

Lincoln (Pa.) defensive back Kai Gray had a lot of opportunities for tackles as Virginia Union Jada Byers ran 40 times Saturday. Gray piled up 17 tackles in the 45-20 loss.

Livingstone defensive back Kevin Larkin Jr. had three interceptions vs. Shaw but it was not enough to pull off a win.