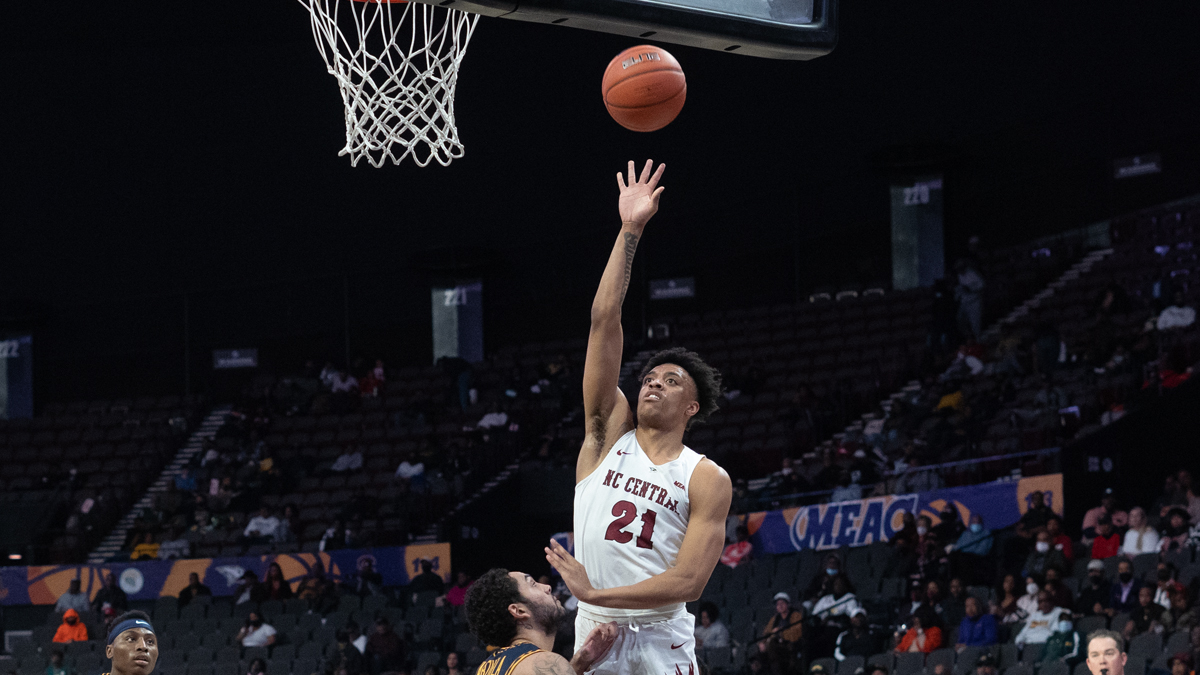 In a manner of speaking, Brendan Medley-Bacon can be called for traveling even before he plays in his first game for NC Central, but Levelle Moton hopes the 7-foot, 1-inch tall newcomer takes the steps necessary to lead the Eagles to a Mid-Eastern Athletic Conference title in 2023.

“And I’ll be completely honest. Of everyone that we brought in, he was the easiest recruit because he called me this time,” Moton said during the MEAC preseason video conference. “And so it was, I like to think, a match made in heaven.”

MEDLEY-BACON HAS BEEN AROUND

Medley-Bacon, whose grandfather went to NC Central, is on his fourth program as well as his second tour of the MEAC. He spent his first two seasons at Coppin State. He moved on to Virginia Commonwealth for the 2020-21 season, and went from there to McNeese State last season. He has already made an impression on his coach.

“The one thing I’m extremely impressed by is his character, like he’s an amazing kid to be around,” Moton says. “He’s a pure joy to talk to. He has a level of maturity that carries over onto the floor that complements his skill set … One of the smartest and brightest guys that we have.”

Medley-Bacon was chosen to the third-team preseason all-MEAC team. In all, four Eagles were picked to be all-conference performers: Justin Wright was named to the first team, while Eric Boone and Kris Monroe were both chosen for the second team.

NC Central got one of the 16 first-place votes in the preseason poll and was picked to finish behind Norfolk State, which is trying to win its third straight title.

Through his three previous seasons, Medley-Bacon has blocked 123 shots, with 66 of those coming in his second year at Coppin State, which also is in the MEAC. He started all 31 games he played for the school, which is also the Eagles.

Offensively, Medley-Bacon’s best season was his lone year at McNeese State, where he averaged 9.8 points per game in the 31 games he played in, shooting 54 percent from the field and 71 percent from the free throw line. He scored 10 or more points 13 times, and 20 or more points three times with a season-high of 21 points against St. Francis-Brooklyn on Nov. 26. He had 39 blocked shots as well.

Moton plans to have Medley-Bacon change his offensive approach from what others had him doing before he reached Durham.

“I think a couple of coaches had him playing further away from the basket, and he got accustomed to that. And I say no big fella, if we bring you this far away from the basket, you’re not 7-1 seven anymore, your 6-5,” Moton says. So, let’s keep you a little closer to this basket and let you operate in space, so he’s able to score in the post.”

There are five other newcomers as well as six returning players from the 2021-22 team that finished with an 8-5 mark in the MEAC and 16-15 overall. Moton spent the summer trying to get everyone acquainted and comfortable with each other.

“I think we’re just excited not to have to battle COVID, because COVID has been probably our biggest enemy the last two years,” he says. “So, we’ve been able to be around each other and develop some camaraderie and work out in the summer and lift weights. We haven’t lifted weights in two years, so you take those things for granted, when you actually going through that actual process, but when it’s taken away from you, you have a deeper appreciation for it.”

The season opens with a road game at Virginia on Nov. 7, and Moton considers it the first test.

“It will be a challenge for myself and my coaching staff to create a game plan that places our kids in the best situation possible, but that’s why we do it,” Moton says. “That’s the fun part of it.”