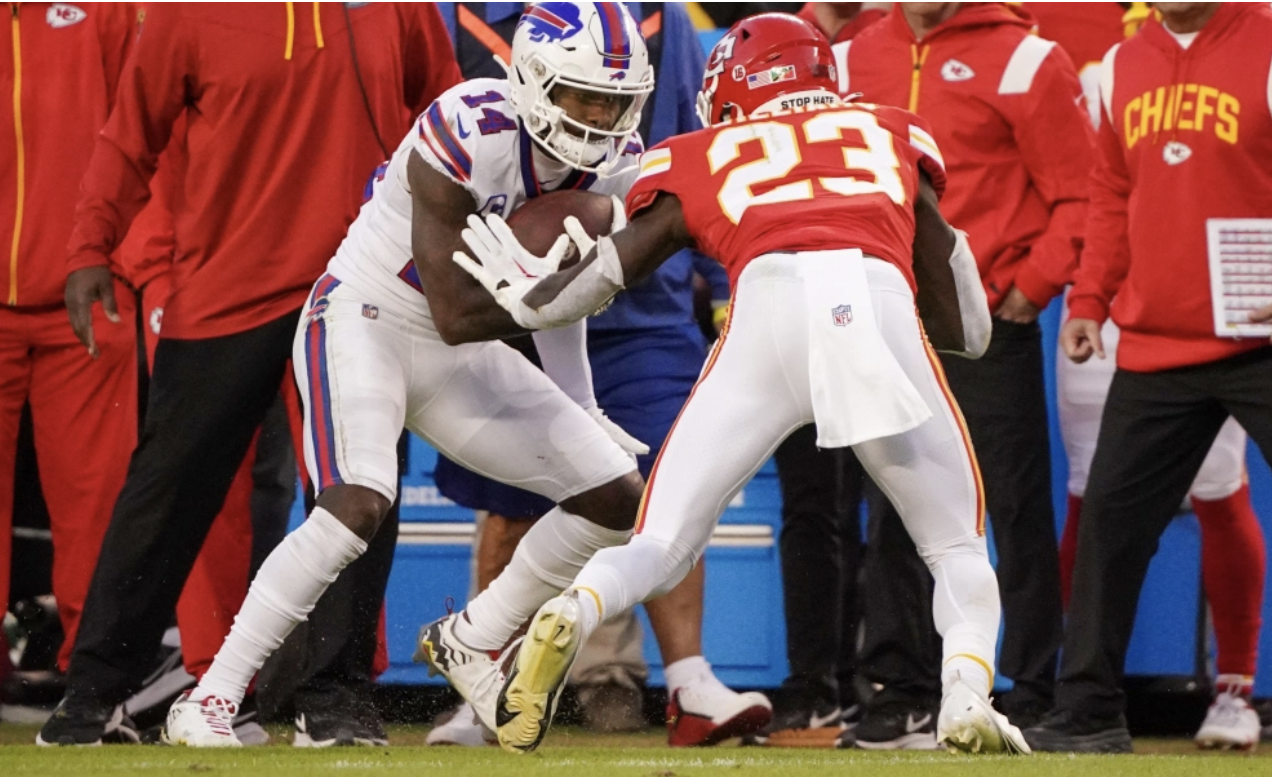 Kansas City rookie defensive back Joshua Williams (#23) was targeted by Buffalo in their big match up Sunday night. The Fayetteville State product played tough but was taught some lessons by Bills vet wiedout Stefan Diggs (#14).

Kansas City rookie defensive back Joshua Williams out of Fayetteville State made the biggest splash among HBCU NFL products with his play this week.

The 6-3, 193-pound first-year player saw his most extensive action of the season in Sunday’s night’s showdown between his Chiefs and the Buffalo Bills.

Williams, the first HBCU player to go off the boards in the 2022 NFL Draft, got his first start at cornerback and played 55 snaps on defense, 75 percent of his team’s plays. The rook came through with nine tackles, six of them of the solo variety. He added two tackles for losses. He was also credited with one pass break-up.

The Chiefs reported that in addition to his tackles, Williams gave up two touchdowns in press-man coverage. They came on two perfectly thrown balls from Bills quarterback Josh Allen.

On the first TD, Williams was beaten by the Bills’ 6-2, 210-pound wideout Gabe Davis on a 34-yard fade pattern. The second-quarter score gave the Bills a 10-7 lead. See a detailed description on video here.

In the third quarter, wily veteran Stefon Diggs beat the rookie on an identical fade pattern covering 17 yards. That score put the Bills up 17-10 after the teams went into halftime tied at 10. See it here.

The 6-4, 315-pound sixth-year run-stopper out of Albany State had four solo tackles, among five stops vs. the Jags. One of those solos, was a sack of QB Trevor Lawrence. It was his second sack of the season.

Philadelphia defensive tackle Javon Hargrave also got in on the action as the Eagles moved to 6-0 with a 26-17 win at home over Dallas.

Hargrave, a seventh-year player out of South Carolina State, had just two tackles, both solos. But he also got one hit on Cowboys’ QB Cooper Rush.and swatted down one pass.

– #23 JOSHUA WILLIAMS, DB, Kansas City (1st season, FAYETTEVILLE STATE) Williams started at cornerback in the Chiefs’ 24-20 loss to Buffalo. He was second on the team with nine tackles, six solos with two tackles for losses. Williams was in on 55 defensive snaps (75%) and six (26%) snaps on special teams.

– # 97 JAVON HARGRAVE, DT, Philadelphia (7th season, SOUTH CAROLINA STATE) – In 26-17 win over Dallas, Hargrave started at defensive tackle and had two total tackles, both solos, one hit on the quarterback and one pass swatted down. Hargrave played 48 defensive snaps (72%).