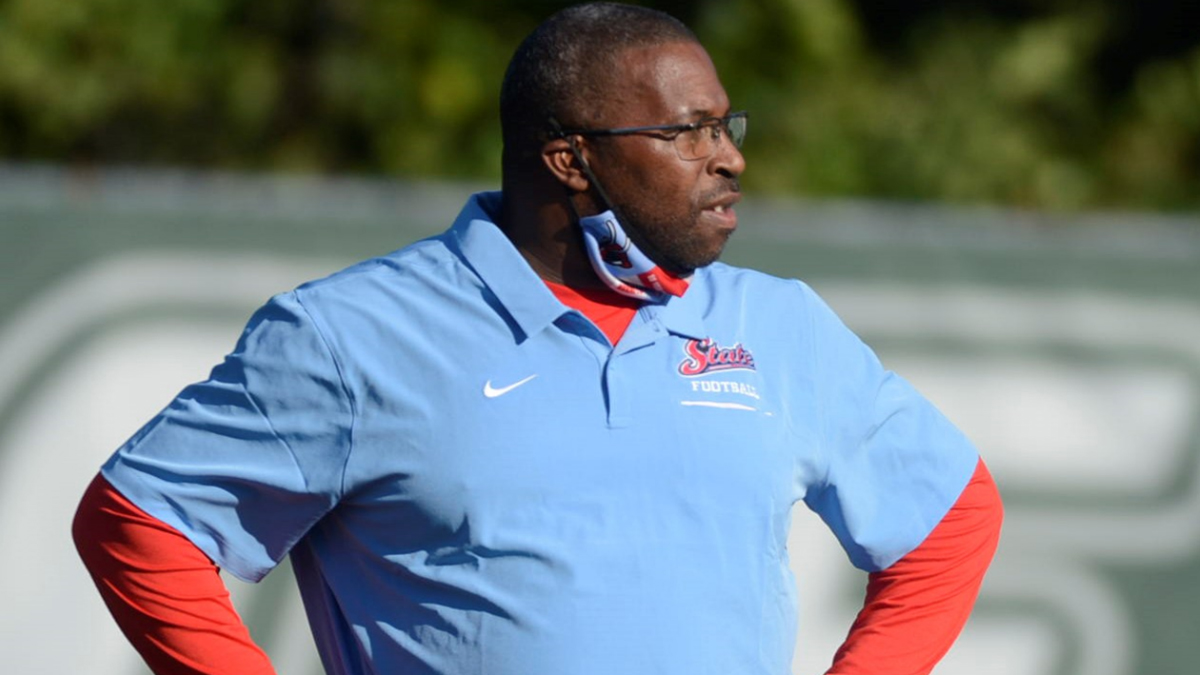 Dover, Del. (Oct. 17, 2022) — Delaware State University Athletics has been informed by the family of  Bryan Bossard that the Hornet assistant football coach passed away in Philadelphia this morning at the age of 55.

A former Dover (Del.) High School and University of Delaware football star, Bossard joined the Hornets’ staff as running backs/ tight ends coach prior to the abbreviated 2020 season, which was played in the spring of 2021. He was promoted to offensive coordinator midway through the fall 2021 season. Bossard coached the first two games of the 2022 campaign before stepping down due to his illness.

In the last two games of the fall 2021 season with Bossard as offensive coordinator and play caller, the Hornets averaged 27.0 points and 344.0 total yards, in addition to throwing seven touchdown passes.

Delaware State combined for 12 touchdown throws in the last four games, including four in two of those contests, a year ago.

Bossard brought more than 30 years of college coaching experience to the Delaware State football program, highlighted by serving on the staff of the University of Delaware’s 2003 NCAA I-AA National Championship team.
“I join our players and staff, along with the entire Delaware State University family in extending condolences to Bryan’s family and friends,” said Hornet head football coach Rod Milstead. “I was honored that a coach with Bryan’s experience and accomplishments agreed to join our staff. He made a big difference in our program during his time with us, helping me to become a better coach, in addition to raising the skill level of our players.”

Milstead added, “Bryan believed in our vision at Delaware State and put everything he had into helping the program improve each and every day.”

Delaware State players began wearing “Coach Bo” helmet stickers prior to last week’s game at Norfolk State, and will continue to do for the remainder of the season.

His most recent college coaching position prior to Delaware State was as an assistant (wide receivers) at the University of Delaware from 2014 to ’16.

Bryan Bossard was a Delaware Legend

A star defensive back for the Blue Hens in the late 1980s, Bossard served two previous stints on the University of Delaware coaching staff.

During his first year back at UD in 2014, Bossard played a key a role in the development of first team All-Colonial Athletic Association wide receiver Michael Johnson, who ranked among the CAA leaders with 78 receptions for 830 yards.

Bossard was also a member of the Blue Hens’ coaching staff from 1994-98 in the same capacity, leading Delaware to three consecutive NCAA Tournament appearances under legendary head coach Tubby Raymond, a College Football Hall of Fame member who won 300 career games for the Blue Hens. The 1997 squad went 12-2 and advanced to the national semifinals.

Bryan Bossard broke into the collegiate coaching ranks as a graduate assistant at Delaware in 1990.

In his 15 years as a player and coach at Delaware, the Blue Hens put together a cumulative record of 119-63-1 (.653) and made seven NCAA Tournament appearances.

From 2010 to 2013, Bossard served as offensive coordinator and wide receivers coach at Bucknell University.
During a previous stint at Bucknell  (1992-94), he worked with the defensive backs and returners.
In addition to his two stints on the coaching staff at Bucknell, Bossard was on the staffs at Pittsburgh (2008-09) and Maryland (2005-07). At both places, he coached the wide receivers and returners while recruiting in the Maryland, Delaware, Virginia, and Washington, D.C. areas.

While at Pitt, Bossard worked under former NFL coach Dave Wannstedt.  He previously worked for Wannstedt in a pair of NFL summer coaching internships with the Chicago Bears in 1996-97. Pittsburgh posted a solid 19-7 record and appeared in a pair of bowl games during his tenure.

Two receivers Bryan Bossard coached were selected in the 2009 NFL Draft. Maryland’s Darrius Heyward-Bey was a first-round pick of the Oakland Raiders, while Pittsburgh’s Derek Kinder was drafted by the Chicago Bears in the seventh round. Heyward-Bey was a Freshman All-American under Bossard’s watch in 2006. A year later h

e also helped Terpswideout and future NFLer LaQuan Williams earn Freshman All-America accolades.
Prior to his time at Maryland, Bossard spent three years coaching the receivers and returners, in addition to serving as passing game coordinator at Delaware in 2002-04 under K.C. Keeler. He helped lead the Blue Hens to the 2003 NCAA I-AA (FCS) national title with a 15-1 mark and led the 2004 squad to a berth in the second round of the NCAA Tournament. During Delaware’s championship season, the Hens had three different receivers with 50-or-more receptions.

He then coached defensive backs at Morehouse College (1991) and West Chester (Pa.) University (spring 1992) In 1999, Bossard coached the receivers at Army before moving on to a defensive back coaching position at Wyoming for two seasons in 2000-01.

Bryan Bossard lettered at Delaware for three seasons at cornerback in 1985-88. As a senior, he led the Hens with 122 tackles and earned the team’s defensive Most Valuable Player and All-Yankee Conference Second Team honors.
He earned a degree in agricultural business management from Delaware in 1989.