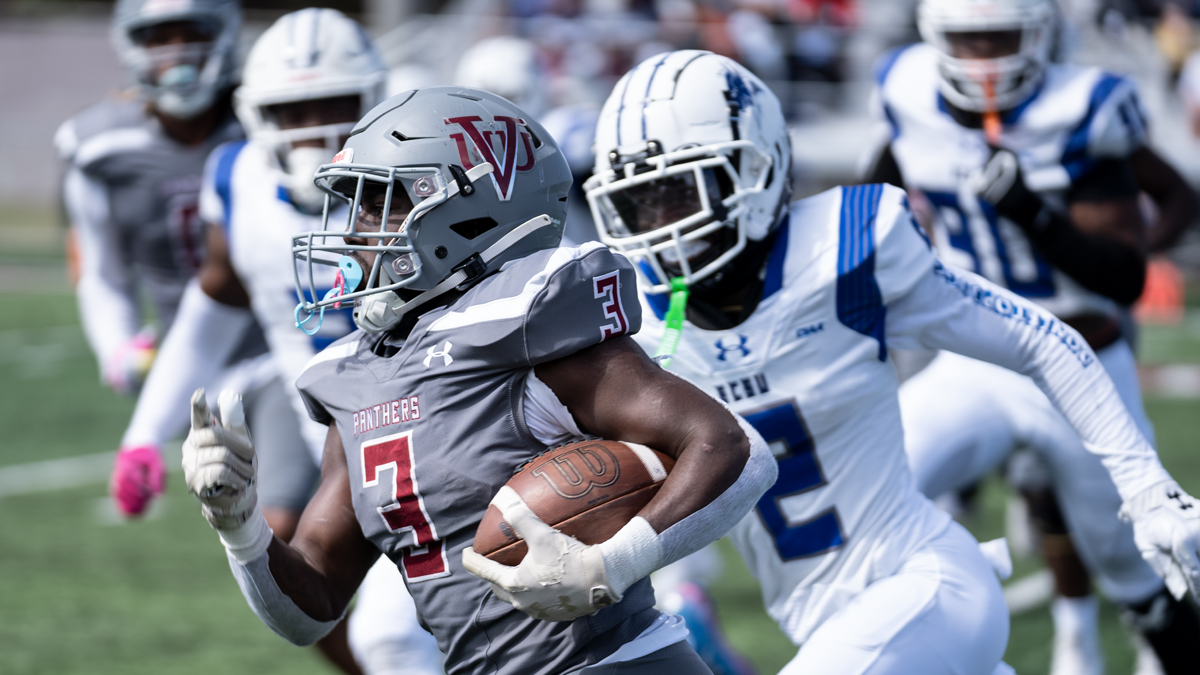 Virginia Union running back Jada Byers had another big day as he passed the 1k rushing mark.

When Virginia Union defensive end Jah’Ke Hilliard looks at Jada Byers, he sees a player he describes as a “human joystick.”

“He does the same thing every week, no matter how many times he gets hit, no matter what,” Hilliard said. “If he messes up he comes back and he does something bigger — two times, three times bigger.”

So Saturday, October 8, for Byers was another day at the office — yet another game he finished with an eyebrow-raising stat line. The nation’s rushing leader ran for 205 more yards in what finished as a 49-0 victory for 12th-ranked VUU, over visiting Elizabeth City State, in front of a homecoming crowd of 7,399 at Hovey Stadium.

It was a second straight shutout for the Panthers as they continued what’s been the program’s best start to a season in 15 years.

“He gets it done,” VUU coach Alvin Parker said of Byers. “He turns in week in, week out.”

Byers entered Saturday with 891 rushing yards, which led all players in the country, regardless of NCAA division.

Against ECSU (1-5, 1-2), Byers had 107 of his 205 yards in the first quarter alone. And, after a 2-yard run on the first play of the second quarter, the loudspeaker at Hovey Stadium proclaimed a milestone: Byers had reached the 1,000-yard plateau for this season.

He heard the announcement from the field, a special accomplishment and one he’s appreciative of his offensive line for.

“It means a lot to me personally, but to me it should mean a lot more to my front five,” Byers said. “Because my goal was 2,000 and I said this in June, the summertime. But I always told my front five, ‘Hey, this is y’all’s job right here.'”

That offensive line has done its job and the consistently quick Byers has done the rest, to slip through the cracks they create. He toted the ball 29 times Saturday, averaging 7.1 yards a carry. He also scored twice to take sole possession of the Division II lead in rushing touchdowns with 13.

“He prepared the same way last year,” Parker said. “I think he just had to learn the game and understand what he had to get done. And once he got that done … I think this year just blossomed for him.”

Virginia Union ran for 291 yards Saturday, outgaining ECSU by 273 in that category. And quarterback Jahkari Grant supplemented that with an efficient day, 9 of 13 for 153 yards passing and two touchdowns, including a precisely placed ball along the sideline to a speeding James Jackson for a 38-yard second-quarter score. That pushed the Panthers to a 28-0 halftime lead, and they never looked back.

Saturday was the third shutout for the Panthers this year, including a 77-0 win over Virginia University of Lynchburg to start the season and a 69-0 win over St. Augustine’s last week.

VUU defensive coordinator and linebackers coach Edward Pointer has been impressed by the unselfish nature of the players in his unit.

“Understanding that … if all 11 of them do their job, we can be in position to make a play,” Pointer said.

Now a Virginia Union team off to its best start in 15 years has a chance next week to go 7-0 for the first time since 1990. Next week’s game is a big one: at three-time-defending CIAA champion Bowie State.

But the Panthers have the human joystick and what’s been a tough defense to crack. And led in large part by those strengths, their quest for a first CIAA title since 2001 continues.

“Every week we come with the same mission, the same motor,” Hilliard said. “And nothing changes.”