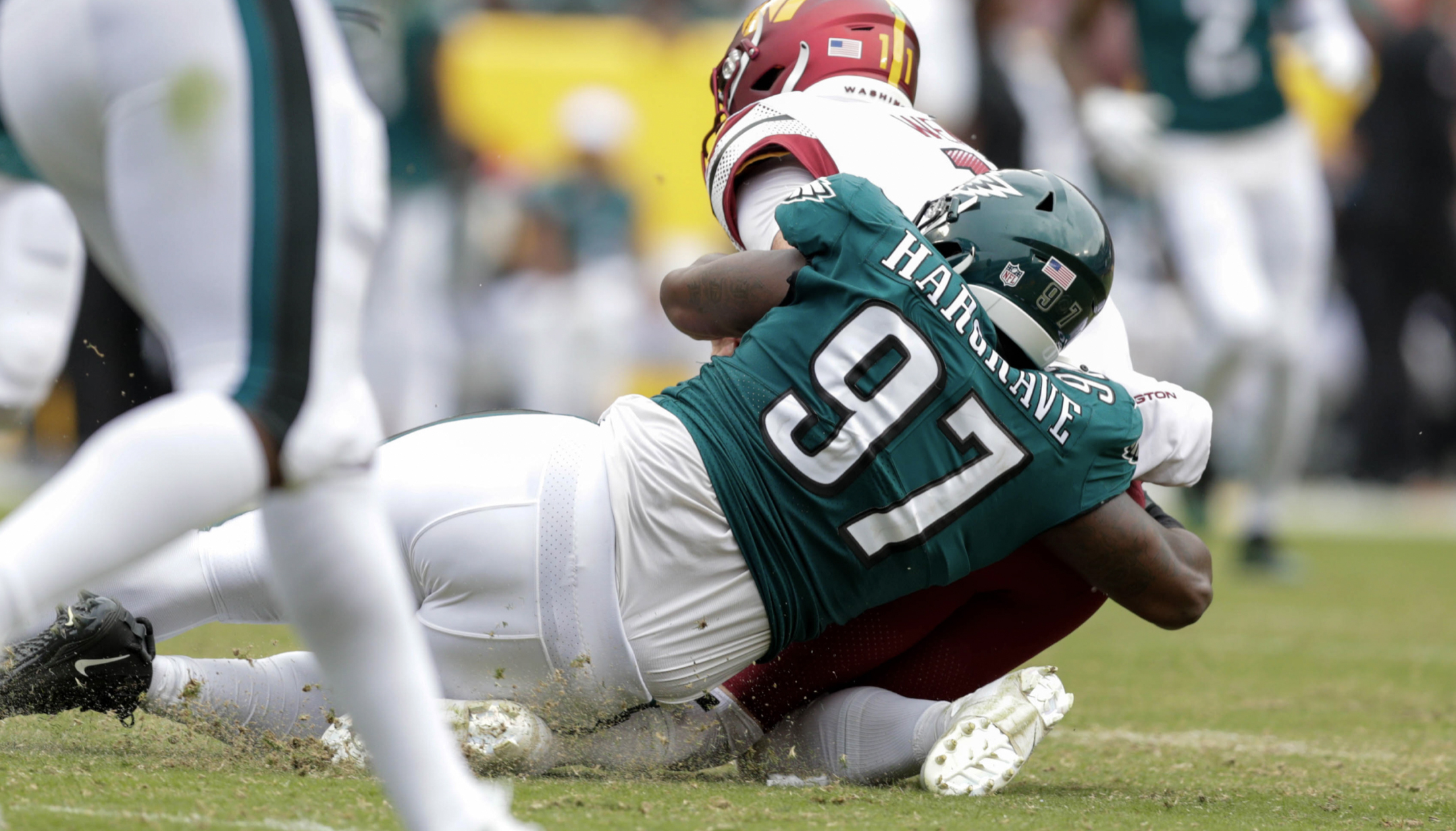 Philadelphia’s Javon Hargrave (#97, SC State), known as ‘The Grave Digger,’ buries Washington QB Carson Wentz for his first sack of the 2022 season. Hargrave is the Defensive Player of the Week in the HBCU NFL Report. See all the performances and latest news on this week’s Report.

Week Three of the 2022 season brought veterans to the fore in the HBCU NFL Report.

Arkansas-Pine Bluff product Terron Armstead is the most senior HBCU player in the league. He plays in his tenth season. Armstead is this week’s top offensive player.

Punter Jamie Gillan, like Armstead a product of Arkansas-Pine Bluff, wins the special teams award for the second straight week. Gillan is in his fourth season.

All three of this week’s honorees are with their second teams.

Armstead spent his first nine years starring with the New Orleans Saints. He signed a huge contract with Miami after last season. At New Orleans, he was selected the Saints’ Man of the Year in 2019. He earned three Pro Bowl selections (2018-2020). The Saints selected the 6-5, 304-pound specimen out of UAPB in the third round of the 2013 Draft.

Considered one of the league’s premier left tackles, he is now doing the same for Miami. The Dolphins are one of only two undefeated teams through three weeks of the 2022 season.

Well, guess who plays for the other undefeated team, the 3-0 Philadelphia Eagles? That’s right, Hargrave, the 6-2, 305-pounder who spent his first four years starting at Pittsburgh. The Steelers took him in the third round of the 2016 draft.

His was a huge signing with the Eagles in 2020. He earned his first Pro Bowl designation last season.

All-pro linebacker Shaquille Leonard of the Indianapolis Colts has gone through five full practices over the last week. He was still not active for Indy’s surprising 20-17 big win over previously undefeated Kansas City.

Colts’ head coach Frank Reich said “But obviously the player’s the one who’s got to play. And only he truly knows how it feels. So, we watch tape and we can see when you look at tape from last year or the year before versus tape now, and you watch him move, we’re doing that. And it’s not the same. We need it to look the same.

“From our standpoint, we need that tape to look like what it looked like when you were relatively healthy.”

– #72 TERRON ARMSTEAD, LT, New Orleans (9th season, ARKANSAS-PINE BLUFF) – Started for Dolphins at left tackle in 21-19 win over Buffalo. Miami rushed for 41 yards and two TDs and passed for 186 yards and one score as they moved to 3-0. QB Tua Taogovailoa was sacked once as was back-up Teddy Bridgewater. Armstead logged all 43 (100%) offensive snaps.

– # 97 JAVON HARGRAVE, DT, Philadelphia (7th season, SOUTH CAROLINA STATE) – Started at defensive tackle for the Eagles in 24-8 win over Washington finishing with two solo tackles, one a sack of QB Carson Wentz for -7 yards, his first sack of the season. It came one play after teammate Fletcher Cox also sacked Wentz. Hargrave also recovered a fumble by Wentz when he was strip sacked by two Eagles. He was in on 41 plays on defense (53%).

–  #71 TYTUS HOWARD, OG, Houston (4th season, ALABAMA STATE) – In 23-20 loss to Chicago, Howard started at right tackle as Titans rushed for 92 yards and a TD and passed for 245 and another score while giving up just one sack. Howard recovered one fumble and played 57 snaps on offense (97%) and four snaps on special teams (14%).

– #80 CHESTER ROGERS, WR/KR, Cleveland (6th season, GRAMBLING STATE) – Rogers, who was with Houston in the preseason and placed on injured reserve and released before the season started, was signed by Cleveland on Sept. 13, two days before Thursday’s game against Pittsburgh. Rogers returned two punts in the 29-17 win over the Steelers for 11 yards (5.5-yard average) with a long return of 7 yards. He also hauled in two punts on fair catches. He played on nine special teams’ snaps (32%).