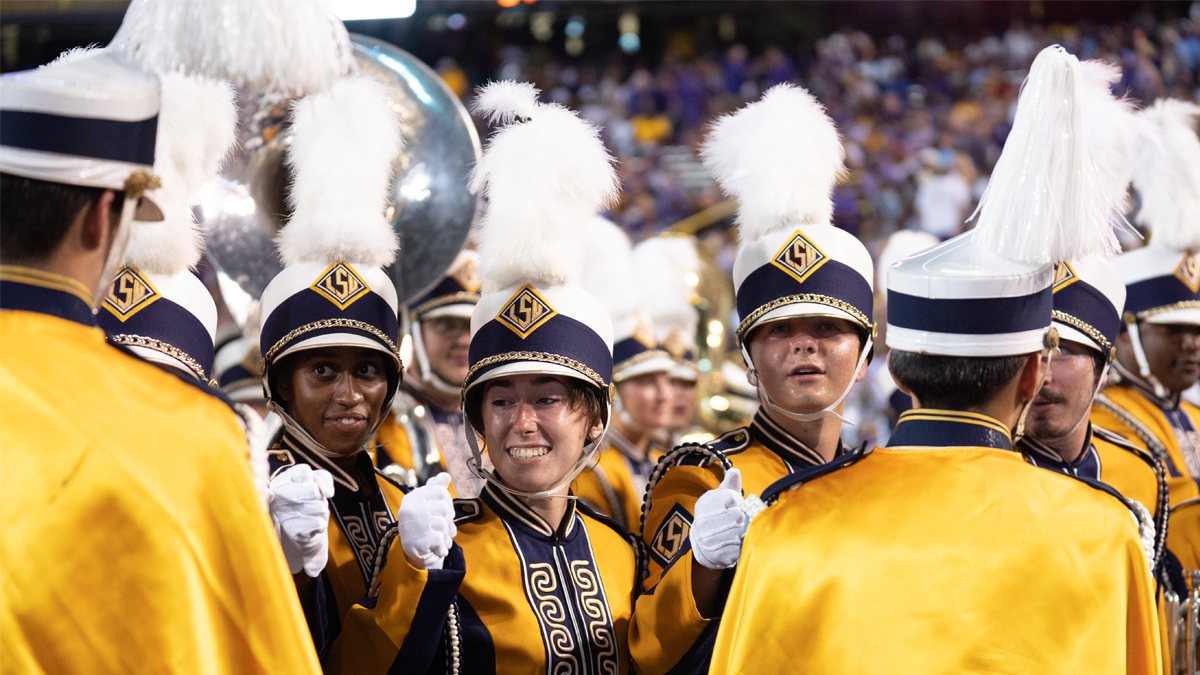 LSU and Southern University got together for two minutes of performance that was a long time coming.

BATON ROUGE, LA — You didn’t have to be a college football analyst to know that the football game between LSU and Southern was over before halftime. Before the end of the first quarter, if we’re being real. LSU led its North Baton Rouge neighbor 34-0 after 15 minutes of the football contest.

But the 102k plus fans who filed into Tiger Stadium on this steamy, late summer night stayed in place until after halftime to watch as the marching band — LSU’s Golden Band from Tiger Land and SU’s Human Jukebox — both took the field separately and then jointly to entertain the crowd.

Despite having inadequate seating in the stands during the first half, the visitors took the field first, and were treated as the rock stars that they are — by both the crowd and the opposing marching band. The Human Jukebox was limited to just six minutes on the field, but it made the most of every one of them, with the band and The Fabulous Dancing Dolls appearing in mid-season form.

Like good house guests, the Jukebox didn’t wear out its welcome, hitting the time limit and getting out of the way so that the Marching Tigers could give their fans what they’ve come to expect in Death Valley.

Then the two bands came together for a moment decades in the making. Baton Rouge’s SEC school and its SWAC school took the same field together at halftime and gave the entire city something to cheer about. The two bands teamed up to perform the cult classic “Cupid Shuffle” to the delight of the crowd.

The performance was put together by the two band directors — LSU’s Kelvin Jones and SU’s Kedric Taylor.

“It’s been a very unique week, but it was great putting it together,” Jones said after the performance. Kendric’s a brother of mine. Fraternally and spiritually, I’ve known him for decades. Getting a chance to put two iconic programs on the field — something like this broadcast on national TV — it’s a blessing. Really is a blessing.”

This wasn’t the first joint performance between a Power Five marching band alongside an HBCU — we just had one in Chapel Hill a few weeks back — but this one was between two universities that routinely represent the same city on a national and international stage.

Indeed it was a blessing for the city of Baton Rouge, which saw an estimated 200k people in and around the stadium on Saturday. Many of them filed out of the stadium as soon as that performance was finished having witnessed a job well done between LSU and Southern.

“It’s really about the unity of the community,” Jones said. “You can’t spell community without unity and we’re both two good programs in Baton Rouge, 225 area code. It’s a great chance to put things together like that.”