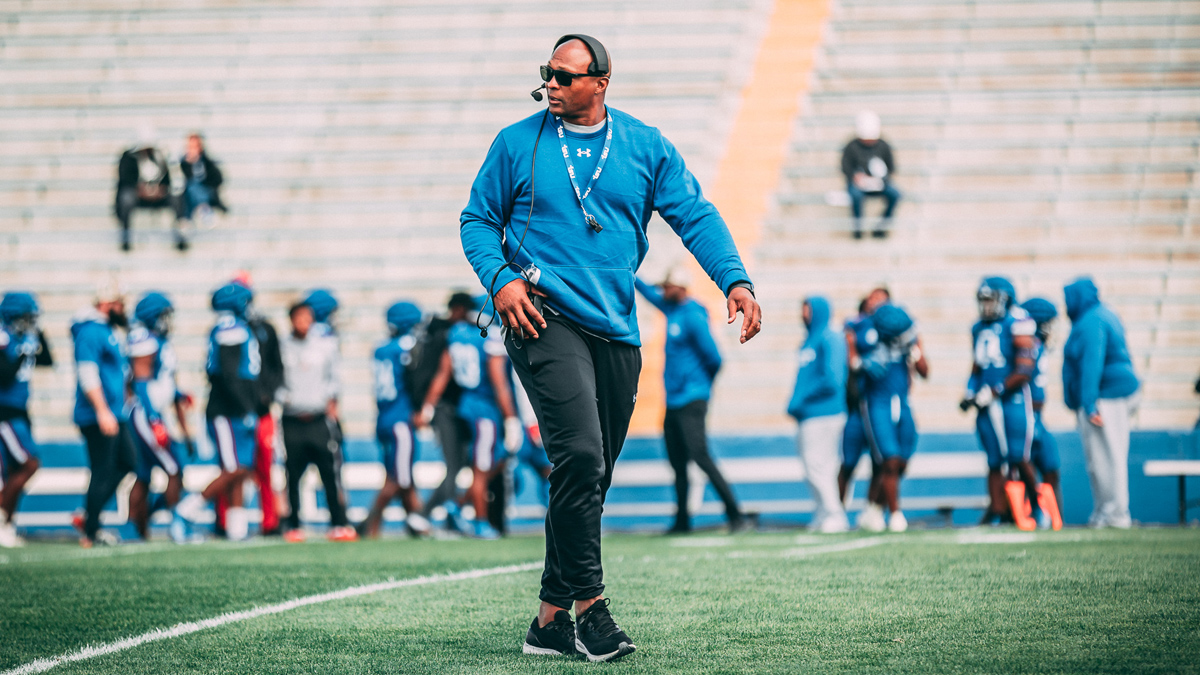 Eddie George has been getting asked about Deion Sanders since he was announced as Tennessee State head coach in the spring of 2021.

The second-year head coach is heading into his second matchup with Jackson State in the Southern Heritage Classic this week. He was asked to clarify how his relationship has evolved with Coach Prime over the last year.

“It’s professional. In this profession, we both know what we’re trying to do, what we’re trying to accomplish at both the universities — but when it’s time to compete, we compete,” George told the media. “It’s no different than us playing each other. We’re competitive for 60 minutes, after the game we can have a beer or a coke and share stories and talk and build and grow as men.”

George was also asked to compare the difference between the approach both men have taken to build their programs.

“It’s not a right or wrong to either approach. The bottom line is — is change happening?” George said. “His approach has been very efficient, it’s been very appropriate. It’s caused a lot of attention, and he’s making noise, having progress building a very solid program — a championship program — that you have to admire. He makes Jackson State a national brand.

I don’t necessarily envy or have jealousy behind what he’s doing, I think it’s remarkable. But I’m still able to move the way I choose to move and I’m comfortable.”

Tennessee State enters the Southern Heritage Classic 0-1 after dropping a hard-fought contest on the road to nationally-ranked Eastern Washington in Week One.

Running back Devon Starling was a shining star for TSU head coach Eddie George, a former Heisman-winning running back himself. Starling was one of the players he inherited when he took the team over following a shortened spring 2021 season that saw him emerge as one of the top young backs in FCS football. But Starling had to earn his stripes all over again in Week one.

“Devon had a camp where he was demoted to second string because he wasn’t doing what he was asked to do,” George explained. “We quite frankly thought that Jalen Rouse had a better camp, and we explained to both of them that it’s 1A-1B and whoever goes out and has the hot hand, we’re going to roll with it. “

George said he wanted Starling to work on getting vertical and challenging defenders.

“He had a day where he imposed his will and regained form,” George said. “But it’s a long season, my expectation for all of our backs — they’re going to have a role in some capacity. It may be Devon this week, it may be somebody else next week. But that’s one thing we just try to pride ourselves upon is being physical with our run approach.”

Deion Sanders agrees. The Jackson State head coach noted in his weekly press conference that George’s team won the time of possession battle against Eastern Washington — and that he wasn’t surprised.

“Coach was a tough,  hard-nosed NFL player. One of the greatest,” Sanders told local media. “And their team is resembling who he is. And that’s a tribute to my friend Eddie George.”

“Just gotta line up and play ball,” George said. “Football is a physical sport. We saw them last year, we’re well aware of how physical they are and as far was the speed goes, we just hope to keep up with them.”