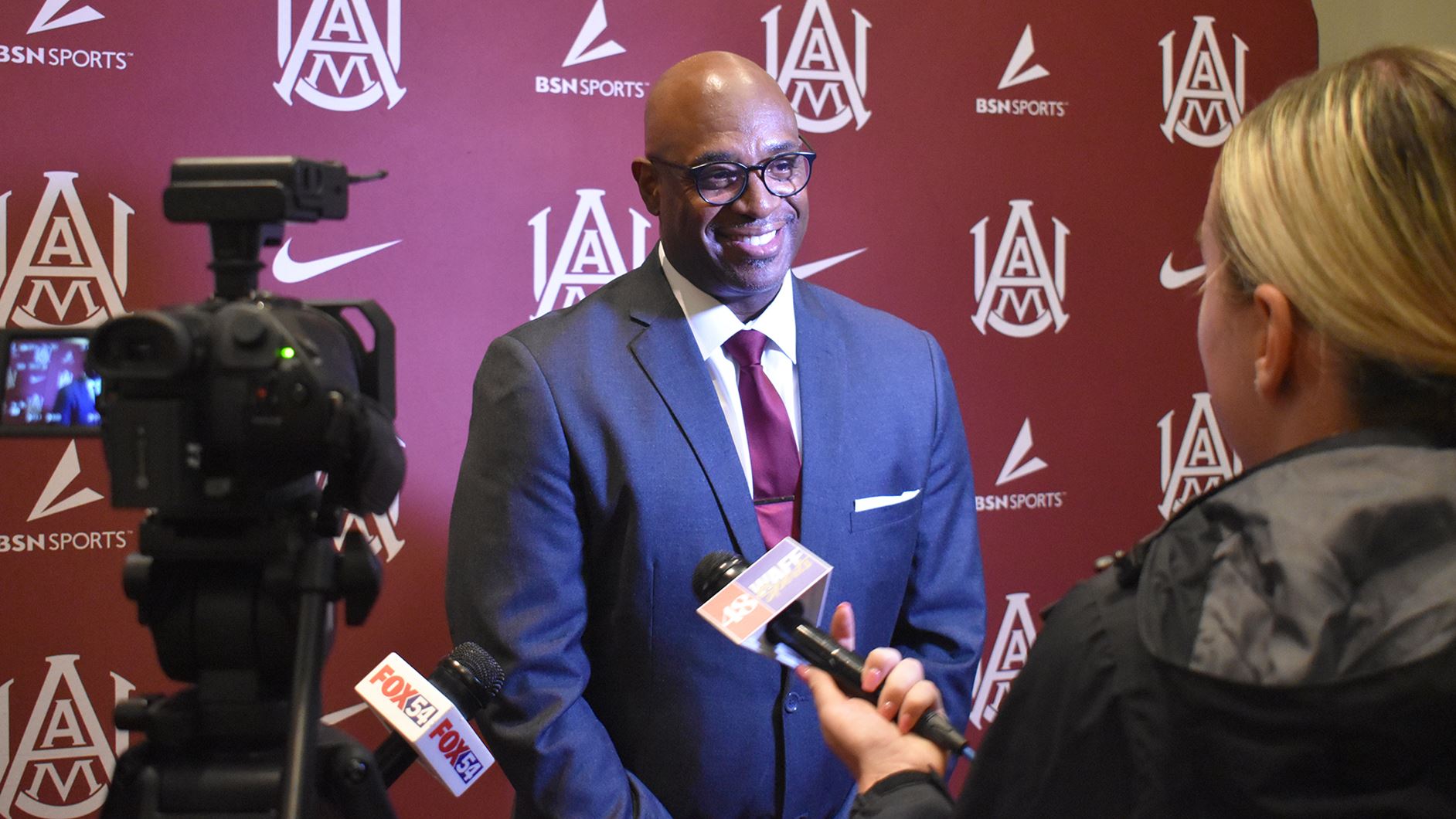 Alabama A&M has hired Dr. Paul Bryant, most recently of Edward Waters University, to take over as AD.

HUNTSVILLE, Ala. – Following an extensive national search, Alabama A&M University and President Dr. Daniel Wims have announced Dr. Paul A. Bryant as the fourth permanent Director of Athletics in the program’s 24-year Division I history on Saturday, August 20.

“We slowed down what usually takes two weeks and took two months to make sure that we get someone that has experience in not only HBCUs but PWI’s [Primarily White Institutions] and has worked throughout the southeast region. That individual is our new Athletic Director, Paul Bryant!”

Bryant comes to A&M with an established track record as a champion of academics, fundraiser, developer of championship programs and facilities and someone who is extremely familiar with the culture of Historically Black Colleges and Universities (HBCUs), having led four such departments over the course of eight years.

Most recently he has served as the Associate Vice President and Director of Intercollegiate Athletics at NCAA Division II transitioning Edward Waters since 2019 following two years as AD at Division I Grambling (2016-18) and South Carolina State (2014-16). He also led DII Stillman during the 2013-14 campaign and Eureka from 2008-13.

In his three years at EWU, Dr. Paul Bryant has led the program to a successful beginning of a transition to NCAA Division II, backed by significant facility upgrades that have helped change the trajectory of Tigers Athletics along with bringing in new programs to expand the program’s footprint with both fans and recruits.

Efforts such as those increased the Department’s profile to the point Edward Waters hosted multiple conference championships and had one sport claim its first league title.

In that span nearly every facility would see improvements made to it, including locker room and stadium renovations at James P. Small Memorial Baseball Park and J. Gardner “Nip” Sams Softball Park and renovations to the Adams-Jenkins Community Sports & Music Complex, home of men’s and women’s basketball and women’s volleyball.

One of those facility projects benefited both EWU’s most high profile sport and one of its newest as Community Field & Stadium, home to football and the new women’s soccer program (2021), now has 5,000 seats, a pair of grand stands, two press boxes, a large video board and State-of-the-Art artificial turf designed to provide a cooler surface in the Florida heat.

In addition to women’s soccer, the Tigers also added men’s volleyball to the spring slate in 2022, making it the only such program in the State of Florida.

The Gulf Coast Athletic Conference would also become very familiar with Edward Waters during Bryant’s time in Jacksonville as they hosted the 2021 track & field and basketball championships. The latter would produce the first GCAC title for women’s basketball since joining the league in more than a decade prior in 2010.

Those efforts would be highlighted by a 2017-18 campaign that would see football and both men’s and women’s basketball claim league titles. For men’s basketball it was their first such championship in 30 years while women’s soccer also reached the SWAC Championship.

A proven fundraiser, those skills would be on display during Bryant’s three years at South Carolina State from 2014-17. While in Orangeburg, South Carolina he doubled the number of donations to the program over the first two years on campus while generating significant increases in single game and season ticket sales, attendance and alumni engagement.

That would help lead to the Bulldogs’ football program to a share of the Mid-Eastern Athletic Conference (MEAC) regular season title and men’s tennis qualifying for the NCAA Tournament.

That success would continue in 2015-16 with men’s and women’s tennis MEAC Championships, a runner-up finish for men’s basketball and the Football Championship Subdivision (FCS) Athletic Director’s Association Most Improved APR Award. He would also be one of just 15 recipients of the FCS ADA Stipend Award nationwide that year.

S.C. State would also produce generational talent in that three-year span as Javon Hargrave earned MEAC Defensive Player of the Year twice and would go on to be drafted in the third round of the 2016 National Football League (NFL) Draft. Darius Leonard, a star linebacker with the Indianapolis Colts, would continue the trend with 2016 MEAC Defensive Player of the Year honors before embarking on an illustrious pro career.

In one season at then Division II Stillman in 2013-14 Dr. Paul Bryant changed the culture with the creation of the Athletic Director’s Honor Roll, Athletic Hall of Fame and a Fifth-Year athletic work program.

He also raised funds for an on-campus fitness center as well as initiating upgrades to the baseball and track & field facilities and increasing department staff in key areas. All of these efforts led to division and tournament championships for men’s and women’s tennis and baseball and eight track & field student-athletes earning berths in the NCAA Division II Outdoor Championships.

Dr. Paul Bryant got his first full-time opportunity at the AD level with Eureka College from 2008-13 where he led an 18-sport program. While there he aided in the development of the institution’s strategic plan, instituted branding guidelines and oversaw a record number of student-athletes making the AD Honor Roll.

A men’s basketball coach by trade early in his career, he served in that capacity as well as Associate Director of Athletics at Urbana from 2004-08. He would go on to earn American Mideast Conference (AMC) and South Division Coach of the Year honors as a result of his direct work with student-athletes, one of whom garnered league Player of the Year recognition.

“It’s great to be here at Alabama A&M University,” said Bryant. “I would like to thank our Board of Trustees, President Wims and the search committee for entrusting me with this prestigious and outstanding appointment. I would also like to thank former AD Bryan Hicks – he has laid the foundation that we will continue to build on and make a little better.”

In addition to his administrative acumen and knowledge on the court, Bryant was also sought after for a number of positions of leadership outside the institutional level.

Additionally, he was a featured speaker at Emerging AD in Morrow, Georgia in 2014. The latter is a well-established organization founded on helping individuals eventually reach the head AD chair through interactions with successful individuals throughout the collegiate athletic landscape.

“We want to make sure that all of our sports are successful in the classroom as well as on the playing surfaces,” added Bryant. “Mediocrity will not be accepted. This is an exciting time for Alabama A&M because of the strategic vision and goals from President Wims and my team and I plan on taking that vision and making certain that the Athletics Department is in line with his vision and goals for the institution.”

Bryant holds a bachelor’s degree from Alaska Pacific, earned his Masters from Urbana and a Doctorate of Education in Athletic Administration from North Central University in 2020.