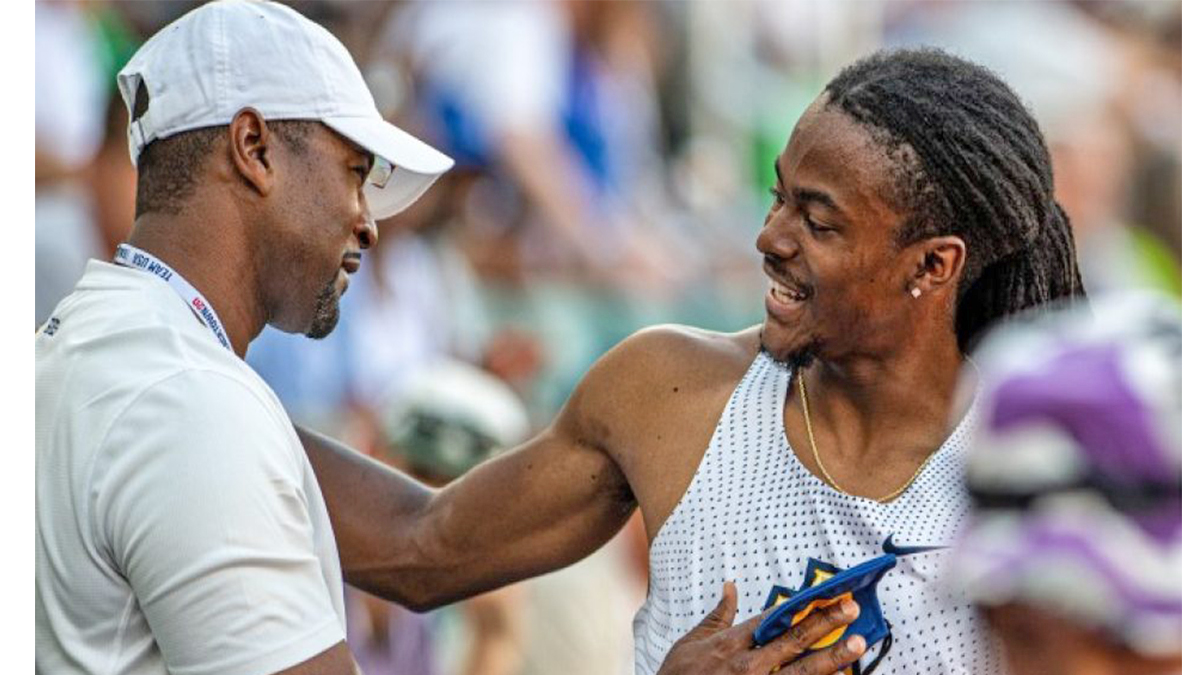 Not surprising that former NC A&T head track coach Duane Ross will have his son and daughter off the Aggie track team with him at Tennessee. Will any other Aggies follow him to Tennessee?

Randolph Ross Jr. has made it official.

The 21-year old NC A&T track standout, three-time national 400 meter champ and gold medalist in the 4×400 meter relay at the Tokyo Olympics, will be joining his father, (Randolph) Duane Ross, the new head of track and field programs at the University of Tennessee.

The confirmation came in a story by Lisa Constantini Sunday on the Team USA website from the U. S. Olympic & Paralympic Committee. It confirmed that Randolph Jr. and his sister, Jonah, who was also a sprinter on the A&T team, will be transferring to UT.

“It was hard leaving what we built for a decade,” Randolph Jr. said in the story, referencing the ten years his father spent turning the A&T program into a budding national track power. “The decision to change schools was my dad’s to make, and my sister and I were going to support him, regardless,” Randolph added.

Randolph will be a rising senior at Tennessee. Jonah will be competing as a junior next year.

The elder Ross had not-so-vaguely hinted a week ago when he was formally introduced as Tennessee’s new head man that his son would join him. When asked of his son’s plans, Ross said then he did not know but said, “he’s in orange today if that says anything.” It obviously did. Orange is UT’s primary color.

What it means for NC A&T?

There was little doubt that the Ross family tracksters would join their father in Knoxville.

The bigger question now is how many, if any, of the other A&T athletes with collegiate eligibility that have trained under Ross will also join him in Knoxville? They of course could stay and run for the new A&T head coach, former Olympic hurdles champion Allen Johnson, who was named to the position last week.

Sophomore Javonte Harding, the Big South 100 and 200 meter champion who finished third in the NCAA outdoor 100 (10.08 seconds) tops that list. Harding ran a career-best time of 19.98 seconds in the preliminary round of the NCAA Outdoors 200 meters but was disqualified for running out of his lane. Harding won the 200 meters at the NCAA Indoors in March (20.46).

Freshman Grace Nwokocha of Nigeria, who finished sixth in both the NCAA Outdoor 100 and 200 meters after winning both events at the Big South championships, is also one of A&T’s coveted track performers.

What it means for Tennessee

The addition of three Rosses to UT’s line-up should pay immediate dividends.

The UT men finished third in last week’s NCAA Div. I Outdoor Championships in Eugene, Oregon. They scored 34 points to finish behind national champion Florida with 54 points and second-place Texas with 38. UT freshman Wayne Pinnock won the long jump competition while fellow freshman Favour Ashe was second in the 100 meter dash, just ahead of Harding.

Tennessee finished fourth in the 4×100 meter relay and did not make the 4×400 meter relay finals. In addition to the 400 meters, Randolph ran both relay events for A&T. The Aggie men finished ninth in the NCAA men’s competition this season after finishing third a year ago.

Next up for the Rosses

Randolph and Jonah are with their dad this week in Eugene at the USA Track & Field Outdoor Championships (June 23-26). They are trying to earn a spot on the U. S. team that will compete at the World Track & Field Championships which will also be held in Eugene later this summer on July 15-24.