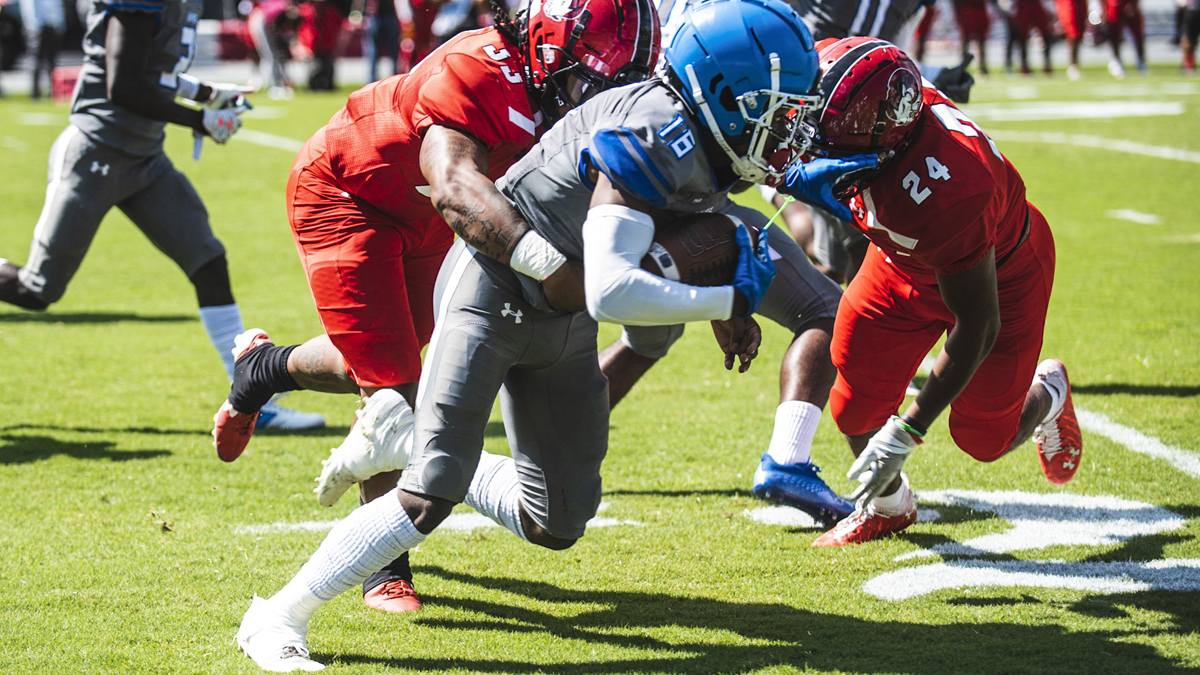 Elizabeth City State wide receiver Jo Hayes has gotten as far as he has by being persistent. Now he’s looking to pass it on.

The Suffolk, VA native had to wait his turn at Portsmouth’s Norcom High School. When he did — as a senior — he tried to make up for lost time.

“I started getting the ball a lot more,” Hayes told HBCU Gameday. “I made a lot of plays, finally was able to get some film senior year. I still wasn’t awarded any offers. Went to a lot of camps, showed out — was in front of college coaches took a lot of visits at the end of the year — but things just never worked out.”

Knowing that he wanted to play college football, Hayes was determined to find a way. It came via a high school teammate that was headed just over the state line at ECSU. So he got the coach’s information and advocated for himself.

“I text the coach and he was like, Hey, you can come in, but you can be a preferred walk on. I was like, ‘That’s all I need. All I need is a chance,” Hayes said. “And then especially since Elizabeth City isn’t too expensive, it was kind of a win-win because it’s close — it’s only 45 minutes away —  and then it’s not ultra-expensive. Paying out of pocket definitely is tough — but it wasn’t too bad where I had to be paying $40,000 a year — if that makes sense.”

Hayes redshirted as a freshman in 2019. Then COVID-19 came and ground everything to a halt, eventually canceling the entire 2020 season for the CIAA. Hayes took advantage of the time off, getting up at 5 AM Monday through Friday to work out and more. Something he calls “stacking days.”

“I started watching film every day, started working out two times a day and going to sleep on time. I’m not partying and I’m not drinking. I’m not smoking,” Hayes said. “I’m not doing the extra things that people see as distractions because I knew where I wanted to get and I knew what I was trying to do.”

That hard work paid off when football re-started at ECSU after an impressive stint at spring ball. He then earned a scholarship and was named to that CIAA’s all-rookie team as a punt returner and receiver. Although he says he still has a way to go, he has already seen the fruits of his effort come to fruition.

“It just came with time, effort and just consistency,” Hayes said. “And when I was down bad and when I was nobody and nobody thought I was going to be anything… I always just believed in myself and I didn’t need anybody else.”

Hayes said he wrote down a list of goals, and one of them was to get a NIL (Name, Image and Likeness) deal. He recently achieved that, becoming an endorser for Body Armor, a sports drink product. Again, it’s something that he actively pursued to make happen.

“I got to the point where I would literally call it a customer service line and just speak to a random representative and be like, Hey, I’m Jo Hayes, I play for Elizabeth City,” he said.

Eventually, Body Armor contacted Hayes, and he’s now on its roster. Once again, his persistence paid off

While he’s been achieving his goals and aspirations, Hayes has been focused on helping those coming behind him do the same. So he put together a football camp for the youth of the 757.

“I wanted to do something different, give back to the community. Cause just where I’m from, it’s a lot of violence, a lot of things going on,” Hayes said. “So I feel like kids need that outlook. They need that that they need to see some better than what they see on an everyday basis.”

The camp will take place on July 9 and is open to ages 8-14 at just $20 each. The camp “Hayes Stacking Dayz” will feature a deep roster of current and former college athletes along with him.

“I’ve been having this thought in my mind for the past two years, but with COVID and everything else like that, the opportunity just wasn’t there,” Hayes said. “And a lot of people that do this, they wait until they get in the NFL. But now, with the NIL thing, I thought it was just a perfect time really to do it.”

Parents may register their children here.