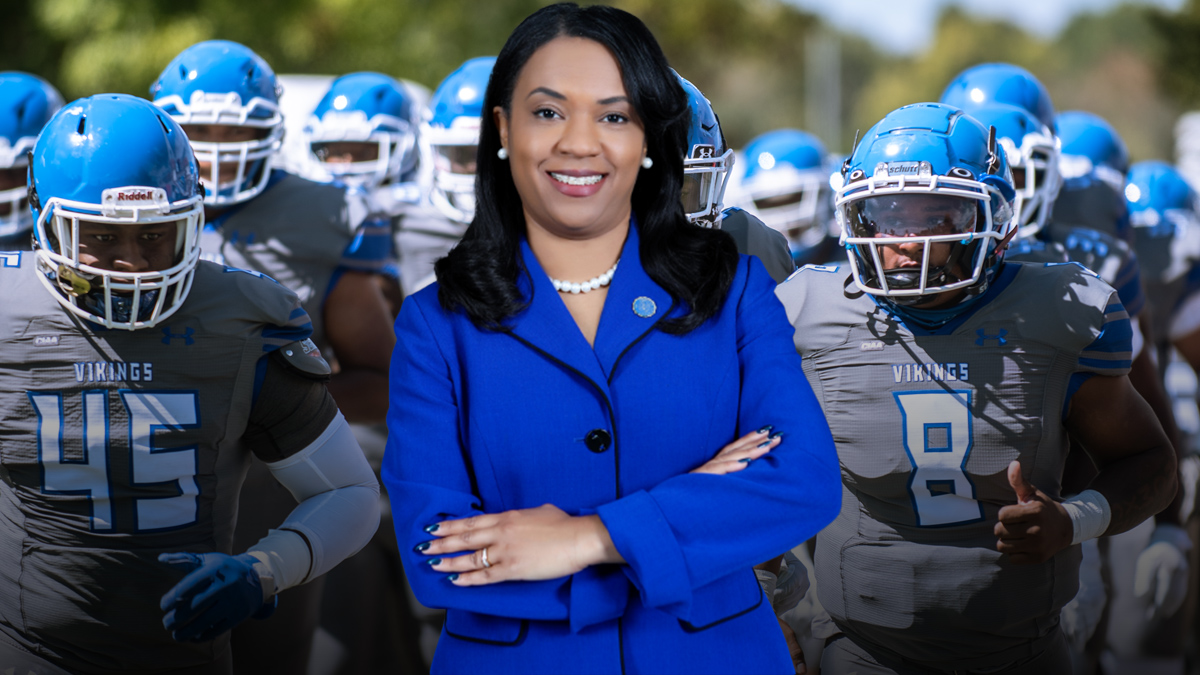 Elizabeth City State University has seen some dark times, but with Dr. Karrie G. Dixon as chancellor things are looking up. And athletics is a big part of that.

Elizabeth City State University, not too long ago, was fighting for its very survival. Literally.

A proposal floated in the NC legislature in the spring of 2014 that would have allowed the UNC Board of Governors to shut down any institution with a 20 percent enrollment decline. And ECSU fit that bill. It was ultimately taken out, but the school, located in rural northeast North Carolina, struggled to turn the tide for much of the last decade.

Things are looking much brighter than that now on the banks of the Albemarle Sound. Enrollment is at its highest total in nearly a decade and Dr. Karrie G. Dixon is a big part of the reason why.

After starting her career in television and media, she taught a college course on public speaking. She says she fell in love with the classroom atmosphere and began to transition to education. From there she went into administration, eventually spending a decade at the UNC System at the behest of Erskine Bowls and Dr. Harold L. Martin, current chancellor at North Carolina A&T.

“A lot of them are seeing the advantages of that. I talked to students who came from as far as California or Alaska on our football team. And I asked them how did you hear about ECSU and why did you choose ECSU? And both of them on different occasions said “we saw how much it cost and we wanted to play ball.”

Dr. Dixon took over as Elizabeth City State’s chancellor on an interim basis in 2018 before being hired permanently.

Along with the serious business of re-routing the Vikings’ enrollment ship, she also understands the importance of athletics to the university’s overall growth.

Dr. Dixon took the time out to chat with HBCU Gameday about the role that athletics is playing in growing her university from a brand awareness and enrollment perspective. To that end, ECSU will tip off the 2021 basketball season by taking on her alma mater — North Carolina State University. A week later, it will make the trip to Chapel Hill to take on the University of North Carolina.

“This is something I’ve been working on since I started here at ECSU,” Dr. Dixon said. “Playing some of the big teams in our UNC System. We’re all sister institutions. It just made sense for some of the larger institutions to play us. Of course, we’re the smallest — let’s put some completion out there.”

Of course, ECSU will be a huge underdog in both games. That’s just the reality when the smallest school in the 16-member UNC System plays two of the biggest. For Elizabeth City State and its student-athletes, it is about letting people know who they are and that they are still here.

“It gives my student-athletes an opportunity to play in an arena — two different places — that they never played before. To have visibility, have people see and watch their talents,” Dr. Dixon said. “Whether not we win or lose the game, it doesn’t matter — they have that platform now. People see their talents. They get to be out there and play these guys who are DI, ACC teams, and really put their talents out there as part of their competition.”

Dr. Dixon talked about those games as well as the business of keeping the CIAA thriving and much more in the interview.