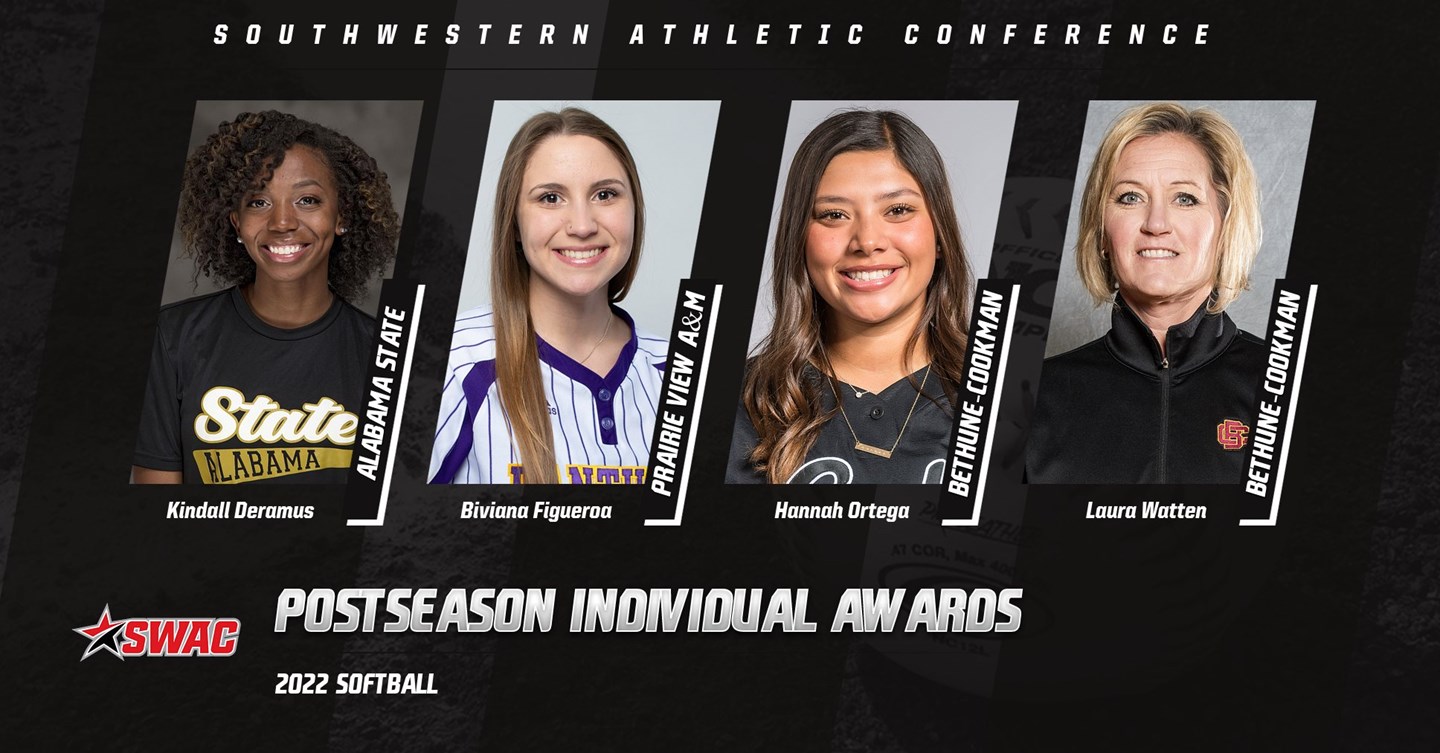 Player of the year honors announced as well as the conference tournament begins.

BIRMINGHAM, Ala. – The Southwestern Athletic Conference announced its 2022 All-SWAC Softball teams and individual award winners on Tuesday morning. The all-conference honors were voted on by the league’s head coaches and sports information directors.

Alabama State’s Kindall Deramus was named Player of the Year, while Bethune-Cookman’s Hannah Ortega was tabbed Pitcher of the Year and Freshman of the Year.

Bethune-Cookman’s Laura Watten was named Coach of the Year after leading Bethune-Cookman to a Eastern divisional title rounding out the list of individual award winners.

Player of the Year
Deramus hit a team-best .410 on the season from the leadoff position. She finished the regular season with a .950 OPS and went 64-for-156 at the plate. Deramus recorded seven doubles and three triples, while also scoring 39 runs and knocking in 25 RBIs. She finished with a .494 slugging percentage and a .456 on-base percentage while stealing 35 bases on 40 attempts. Deramus finished the year 19 multi-hit games and was a multiple time winner of the SWAC Hitter of the Week award this past season.

Pitcher of the Year/Freshman of the Year
Ortega concluded the 2022 regular season campaign by leading the SWAC in ERA (2.1), while ranking third in innings pitched (146.2) and fourth in strikeouts (96). She contributed an impressive 1.18 ERA in conference play to go along with a with 9-3 record and a .196 opponent batting average. She racked up a total of 56 strikeouts against league competition while helping the Wildcats capture the 2022 SWAC Eastern Division title.

Coach of the Year
During their debut season in the conference the Bethune-Cookman Wildcats finished regular season play with a 17-7 league record. Watten has the Wildcats clicking on all cylinders heading into the 2022 SWAC Softball Tournament having one 20 of their final 29 regular season games. The Wildcats currently lead the league in ERA (2.68) and also boast two of the conference’s top pitchers in Hannah Ortega and Halyne Gonzalez. At the conclusion of the regular season B-CU also led the SWAC in pitching and fielding.

The complete listing of all-conference selections and individual awards winners can be found below.