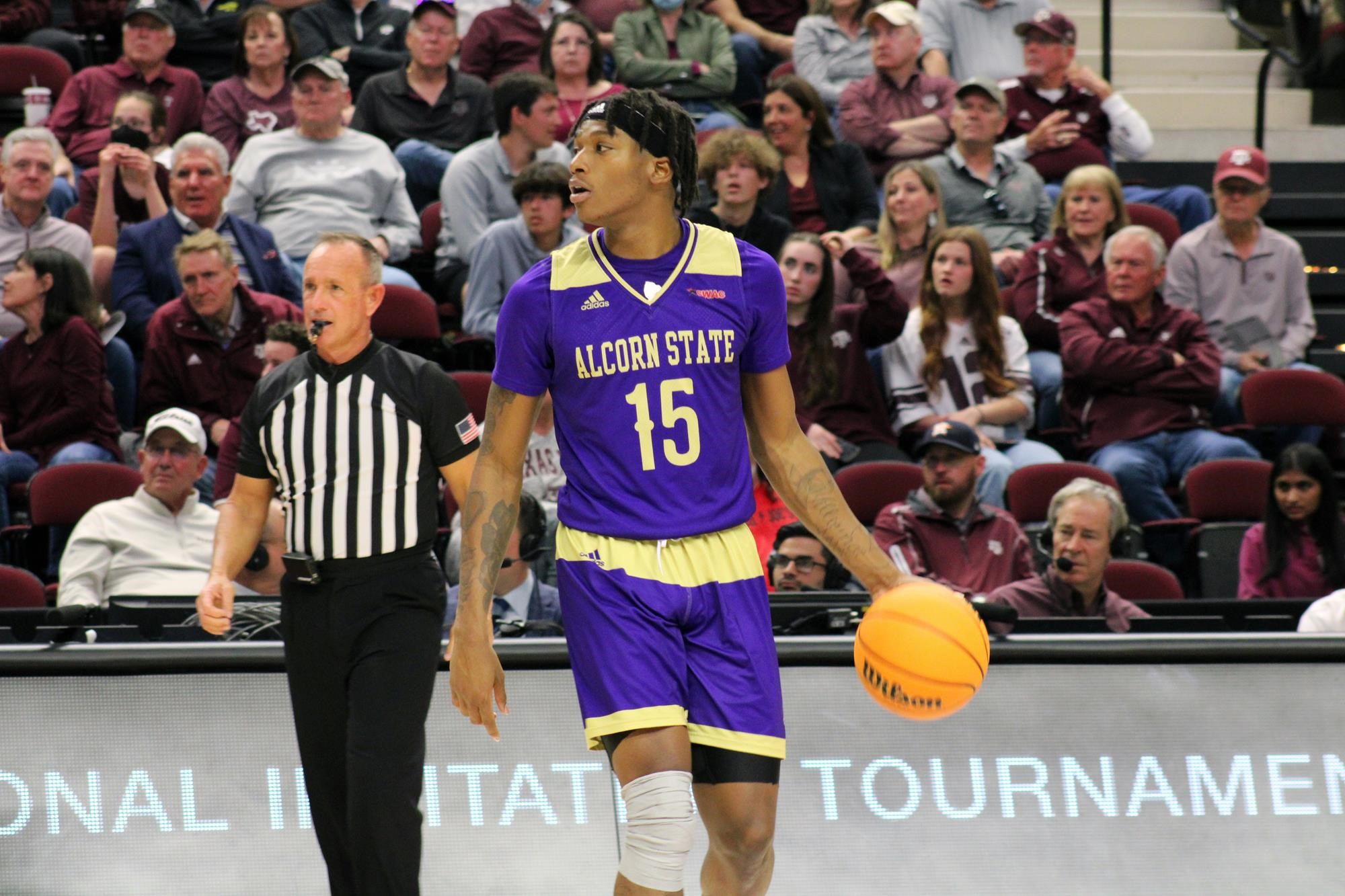 “We will bounce back.” Alcorn State head coach Landon Bussie

COLLEGE STATION, Texas – The Alcorn State men’s basketball team’s 2022 season came to an exciting conclusion in the first round of the National Invitation Tournament on Tuesday, March 15. In the Braves’ final outing, they fell 74-62 to No. 1 Texas A&M University inside Reed Arena.

“We did an excellent job of competing against a well-coached team,” said Alcorn State head coach Landon Bussie about the matchup against the Aggies. “They played really good basketball throughout the season and made a run in the SEC tournament. We played as hard as we could play, and they were just a more physical team, and they deserve to go to the next round of the tournament.”

Three Braves scored in the double-figures against Texas A&M. Dominic Brewton scored a career-high 20 points to lead his team in the effort. The junior from Cincinnati, Ohio, also added six rebounds and four assists.

Rounding out the double-digit shooters, Lenell Henry added 16 points, and Oddyst Walker had 10. Henry also led the team in rebounding with a career-high 16 for his second double-double of the season.

Speaking of his team’s efforts and its reflection of the talent from HBCUs, Bussie said, “I think it says a lot that we can step on any court and be competitive. We played a really tough non-conference. We played Baylor. We played Gonzaga, some of the better teams throughout the country. We play those games for games like this. So, we can be competitive and have confidence. We did a good job just getting out there and competing.”

The Braves won the tipoff, but it would be a full four minutes before either team reached the board. The Aggies struck first with a layup by Henry Coleman. Lenell Henry answered for Alcorn and locked the board at 2 with 15:39 remaining in the first half.

Scoring went back and forth, but a free throw by Henry gave the Braves their first lead of the game, 6-5. At 10:09, Brewton began a short 6-0 scoring run, preventing Texas A&M from making a basket for two minutes to take a 14-9 advantage.

Alcorn would remain ahead of The Aggies up until a three-point jumper by Quenton Jackson put Texas A&M on top 27-24 with 1:32 left in the period. The Braves did not stay down long. Brewton hit a buzzer-beating sideline-three to tie the game going into the break.

Coming back from the half, the Braves snagged a quick three-point lead off of the hand of Brewton. He made a layup just 15 seconds after being fouled, landing the point after.

It would be the last time the Braves would be in the lead. The Aggies caught fire, and Braves fouls kept them at the line. Texas A&M made 22 of 22 free throws in just the second half alone, while Alcorn was held to 2 of 4.

The Aggies outscored the Braves 47-35 in the final period for the 74-62 victory. Texas A&M advances to the second round of the NIT as Alcorn’s season ends.

“We will bounce back,” promised Bussie. “Hit the weight room and start our offseason training, put on a little weight and muscle. Hopefully, we will be in the big tournament, but if not, we would love to be back in this tournament. I’m just so excited about how my guys showed up every game, and I look forward to continuing that next season.”

369
The Latest in HBCU Sports and Culture