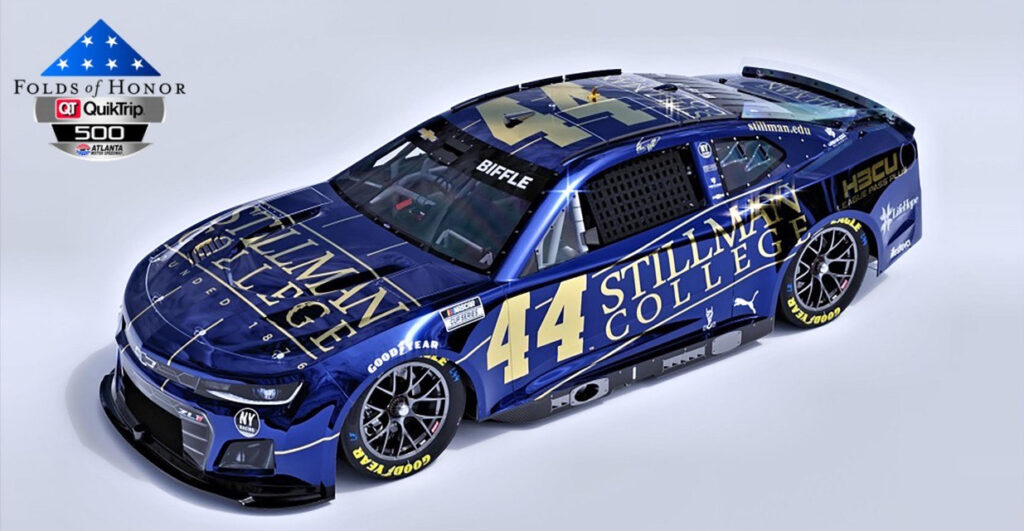 Stillman College next to be featured in NASCAR race

Stillman College the third HBCU paint scheme for the No. 44 car.

The No. 44 Stillman College themed Chevrolet Camaro will be driven by Greg Biffle of NY Racing Team. Qualifying for the race will occur Saturday, March 19. Sunday’s race is scheduled for 2 p.m. CT and will be broadcast on FOX, PRN and Sirius XM NASCAR Radio.

“Stillman College is excited that NASCAR is partnering with HBCUs, to support diversity efforts in their racing cup series,” said Dr. Cynthia Warrick, president of Stillman College. “Having a Stillman-branded car in the Folds of Honor QuikTrip 500 signals a major effort for NASCAR, and we are honored to be a part of this initiative. Plus, our car looks really cool.”

Sunday will mark the third NASCAR Cup Series races this season that NY Racing Team has featured a HBCU as its sponsor. Cohen’s alma mater, Grambling State University, was the No. 44 car sponsor in the Daytona 500, and Florida A&M University ran at the Pennzoil 400 in Las Vegas. In Vegas, Biffle led a lap for the first time in six years prior to having fuel pump trouble for the second race.

NY Racing made its return to the NASCAR Cup Series this year after four years away, while Biffle has returned part-time to race the Cup Series since retiring from it in 2016. It is also his first year since 2002 to drive a Chevy in the Cup Series, also the No. 44. Biffle has raced Atlanta more than 20 times with eight Top 10 finishes at the track in his previous 15 years in the Cup Series.

Stillman College next to be featured in NASCAR race