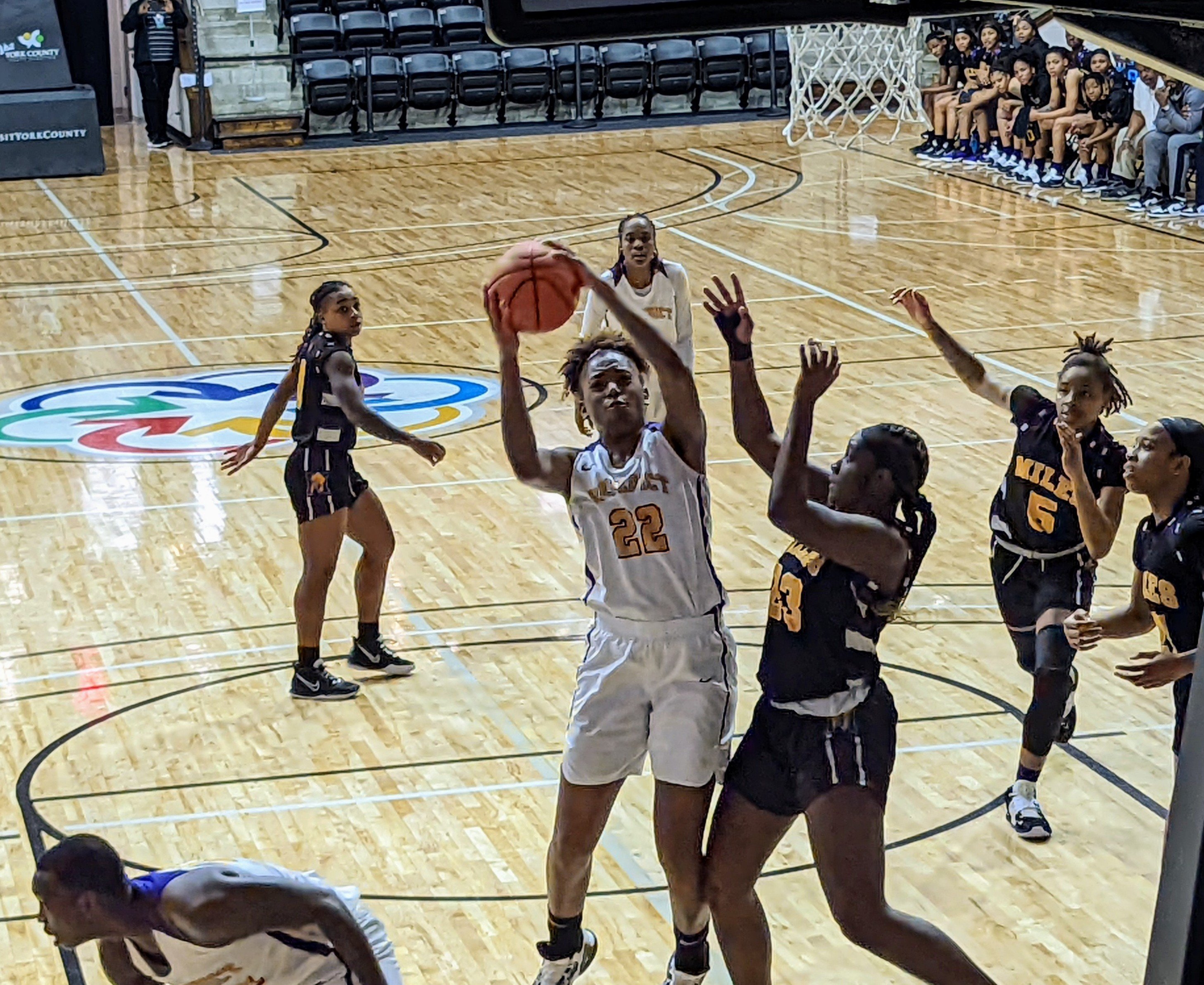 The Albany State women are making a run that will have to go through Savannah State on Friday.

ROCK HILL, S.C. – The SIAC Quarterfinals continued at the Rock Hill Sports and Event Center and saw some familiar faces emerge victorious and advance to the tournament semifinals.

Albany State 68 Lane College 57 – The Albany State Rams came into Thursday’s SIAC Quarterfinal game as the underdog against the two seed out of the West, Lane College, and admittingly had a chip on their collective shoulder.

They pulled off the 68-57 upset and will advance to the semifinals and face Savannah State on Friday.

It was a tight contest throughout, but the Rams were able to get some separation in the second half thanks in large part to their stingy defense according to head coach Robert Skinner.

“I think the biggest thing was we were able to contain their post player [Kayla Simmons],” he said. “At the half she had 15 and we were able to hold her to four points in the second half. We were able to rely on our pressure defense on the interior and we also put pressure on their guards as well.”

Simmons finished with 19 points for Lane and Iitsha Paty chipped in 10.

Kashay Hankerson was the leading scorer for the Rams, finishing with a game-high 23 points followed by Kayla Milner with 16.

Benedict 71 Miles 53 – Benedict was the direct beneficiary of playing an hour away from campus as the band and the fans on their side in the afternoon made a difference as they got the big 71-53 win.

The Tigers took a strong 45-22 lead at the half and never looked back.

Benedict will face Tuskegee in the Semifinals on Friday.

Keondra Archie was the leading scorer for Benedict with 18 points, followed by Wykira Johnson-Kelly with 15 and Ayanna Armstead with 12.

Miles head coach Phillip Wallace Jr. said there’s room for improvement, but he still believes his team is on the cusp of being a contender.

Benedict 83 LeMoyne-Owen 67 – The Benedict men shot a blistering 48 percent from three while feeding off of the home crowd en route to the big win.

The Tigers move on to face Miles in the Semifinals and Tajh Green believes if they play loose and free they’ll give themselves a chance.

Timothy Bing Jr. was the leading scorer for Benedict with a game-high 22 points. Tajh Green was next with 16, then Malachi McCoy with 10.

Jaquan Lawrence led the way for the Magicians with 16 points.

Though it wasn’t the ending he wanted, Le-Moyne head coach Bonzi Wells said he felt his first year was productive and he’s proud of what his players accomplished. He credited his seniors for anchoring the team and helping him navigate the start to his tenure.

Savannah State 61 Tuskegee 50 – A strong first half turned out to be the difference as the Tigers advance to the SIAC Semifinals to face Morehouse.

Marcus Scott finished with a game-high 18 points to lead Savannah State, followed by Avery Joyner with 14 and Trey Deloach with 11.

Devin Booker was the high point man for Tuskegee with 14, followed by Steve Dulley with 12.

808
The Latest in HBCU Sports and Culture