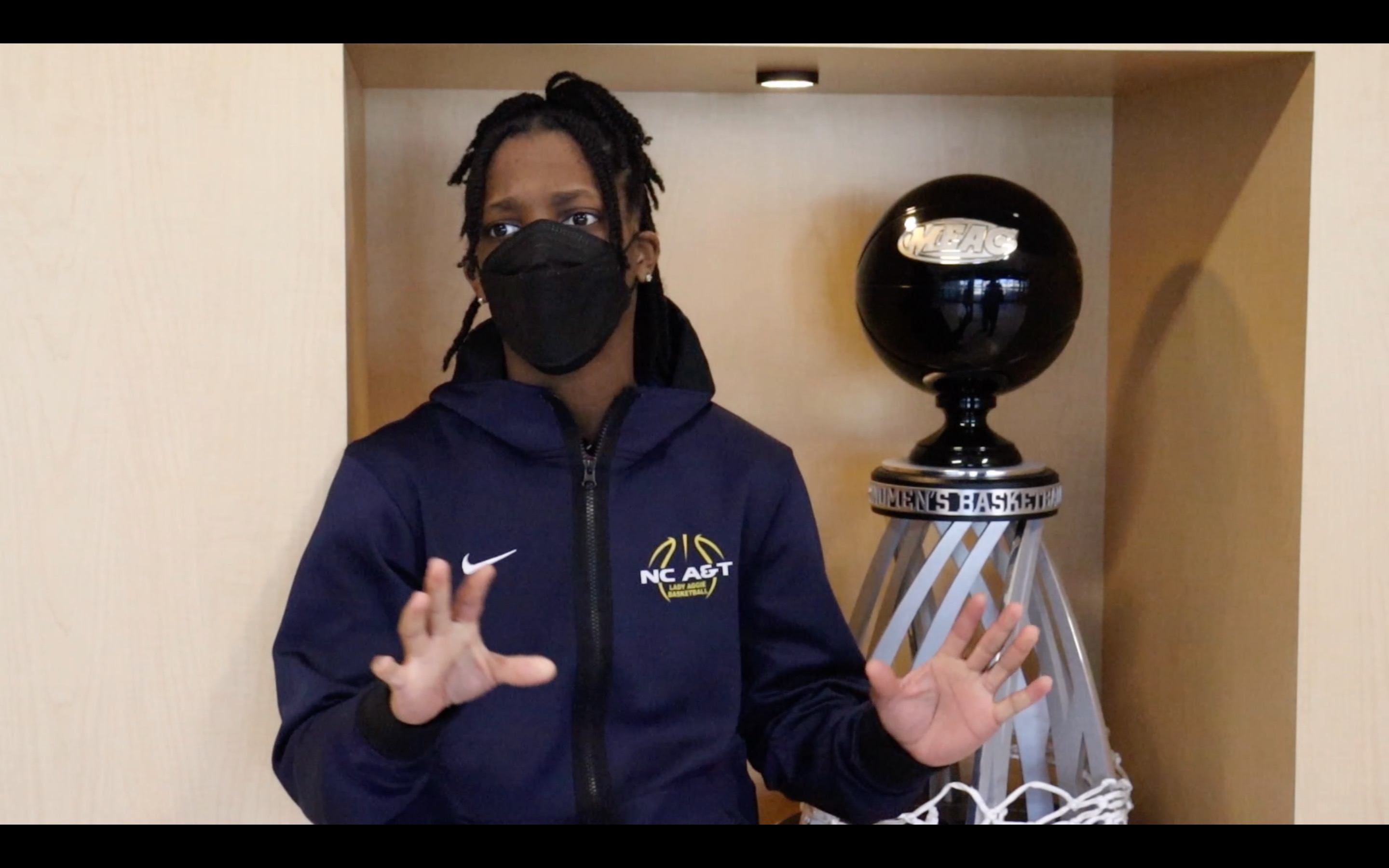 Shareka McNeill explains her transition from a big-time scorer at Virginia Union to a facilitator at NC A&T as the Lady Aggies prepare for battle in their first Big South Basketball Tournament.

Shareka McNeill was last in Charlotte’s Bojangles Coliseum in February 2019 when she scored a tournament-tying record 59 points for Virginia Union in the first round of the CIAA Basketball Tournament.

The Charlotte native returns to Bojangles for the first time Tuesday as her Lady Aggies of NC A&T take on UNC-Asheville in the first round (8:00 p.m.) of the Hercules Big South Women’s Basketball Tournament. The men’s and women’s Big South Tournaments run from Tuesday through Saturday (March 1-5) at Bojangles.

“It’s bittersweet,” McNeill said Monday as NC A&T’s bus prepared to leave for Charlotte. “It’s amazing. Actually, I’m getting excited just thinking about it, going back to Bojangles Coliseum where I did hit the 59 points in the C-I-double-A. And, I’m just excited to go back to my city and play in front of the crowd and my family.”

The journey from VUU to A&T has been quite a story for the 5-5 redshirt junior. She has fought through an ACL injury that ended her 2019-20 season at VUU just as it started. After sitting out almost two years to nurse the injured knee, she has made the transition from VUU in the NCAA Div. II CIAA to NC A&T in the NCAA Div. I Big South. And she has made the change from a high-scoring off-guard at VUU to the point guard position for the Lady Aggies.

When McNeill scored those 59 points (vs. Livingstone), she put on a show similar to Steph Curry’s 50-point outburst at last week’s NBA All-Star Game. McNeill shot 19 of 29 from the field and canned 14 of 20 shots from behind the arc in a 91-57 VUU win.

“I didn’t go in thinking I was going to have that kind of day, but when you see the first couple of threes go in, the rim gets bigger and it’s just easier to find the basket,” McNeil said. “It was just amazing that day.”

What she most fondly recalls about that performance was the reaction of the spectators.

“What I remember is the crowd, like everybody standing up, wanting me to hit 60 to beat the person (NC Central’s Cassie King) that made 59,” McNeill explained. “Just the atmosphere of the Bojangles Coliseum is wonderful.” She scored 38 points in a semifinal win over Lincoln and added 37 in the championship game win over Fayetteville State.

The sophomore’s total of 134 points broke the CIAA’s Tournament’s scoring record and earned her the tournament’s most outstanding player award. It was the second tournament championship for McNeill and her identical twin sister Shameka in their two years at VUU. Shareka, who led the CIAA with a 24.4 points per game average, also was the league’s player of the year.

After that scintillating finish to the 2018-19 season, Shareka started off the following season full of confidence and ready to reach even greater heights. She had games of 55, 44 and 42 points in her first four games and was leading all of Div. II at 39.3 points per game through seven contests. In the eighth game, she tore her ACL and was lost for the season.

After also sitting out the 2020-21 season with the injury, she emerged this year at NC A&T under head coach Tarrell Robinson. She said she was looking for another challenge, and got it.

Shameka, meanwhile, who was more of a point guard at VUU, is now playing at Div. II Anderson (S. C.) University and is outscoring her sister. Shameka, a left-hander, led the South Atlantic Conference (SAC) averaging 22.5 points per game for the 19-9 Trojans.

The biggest difference Shareka observes between playing on the D2 and D1 level is the level of competition and valuing every possession. And her role has changed.

“In Div. II the pace was like up and down,” she said. “Where here, you have to execute every possession, every time you get the ball. You got to fight for what you want.

“Execution is key to winning in this conference.

“It’s a little bit different,” she said in terms of her responsibilities. “I’m a point guard. I’m not the shooting guard. So, I got to run the team, make sure my team is running the right, correct plays. And I score when I need to. It’s not just me out there able to score. There are other big pieces capable of scoring and contributing.”

Keys to taking home the championship

McNeill said the Lady Aggies, coming off a tournament championship in their last season in the MEAC, have had to blend together a lot of new pieces this first season in the Big South. Learning a new structure in this new environment has been challenging, she said. But she feels her teammates are up to the challenge of bringing home a championship ring.

“The number one key is going to be defense,” she said. “A&T is known for defense and that’s what we’re going to have to show when we go down to the Big South.”

And perhaps more big scoring outbursts from Shareka at Bojangles.