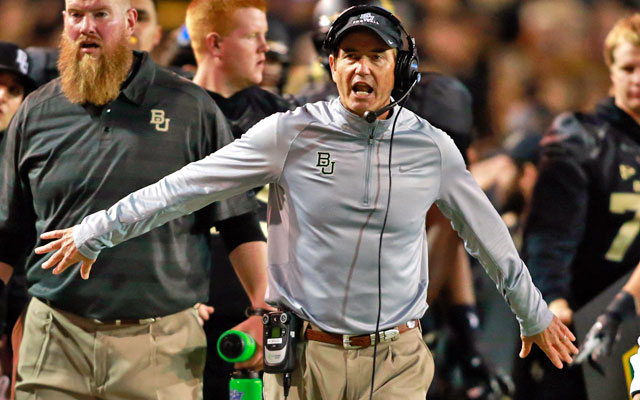 Art Briles won’t be taking over as Grambling State offensive coordinator at all. The former Baylor coach has resigned the job less than a week after accepting it.

The era of Art Briles as Grambling State’s offensive coordinator has come to an end without him ever calling a play.

Briles has told Grambling State he will be resigning his position effectively immediately. Pete Thamel first reported the news.

“Thank you for giving me the opportunity to be part of your coaching staff at Grambling State University,” Briles said in a brief statement on Monday afternoon. “Unfortunately, I feel that my continued presence will be a distraction to you and your team, which is the last thing that I want. Have the utmost respect for the university, and your players.”

Briles’ resignation comes after a week of intense scrutiny for the school, the former Baylor head coach, and the man who brought him in:  Hue Jackson.

Officials initially denied Art Briles had been hired only to back track and announce that  he was coming in to take over as offensive coordinator. That news set off national debate and in many cases, rebuke for Jackson and Grambling State for bringing him in after what Briles was accused of covering up previously. Doug Williams — Grambling State’s favorite son — said he was pulling his support over the hiring.

Jackson released a statement through his foundation, doubling-down on his support for his new hire only hours before he announced he wouldn’t be coming.

Now, after all the attention and negative press, Grambling State is still in need of an offensive coordinator as the calendar turns to March.