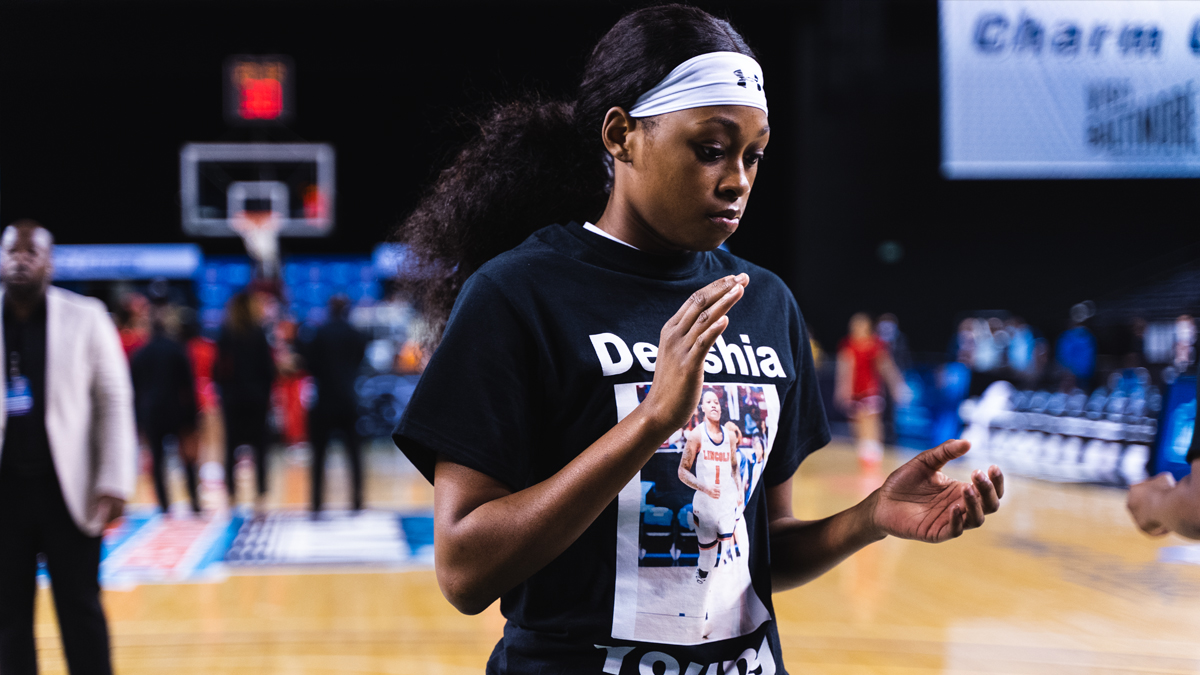 Lincoln University, the top seed in the women’s CIAA Tournament bracket, gritted out a tough quarterfinal win in memory of a fallen teammate.

BALTIMORE — The Lincoln (PA) University women came out onto the court at the CIAA Tournament not only wearing the burden of being the top seed, but also of winning one for a fallen teammate.

Two years prior Lincoln had arrived at the CIAA Tournament thinking NCAA Tournament, only to suffer a painful upset loss to WSSU in Charlotte. One of the key players on that team was DeAshia Young. Young moved on from the program and went to play professional basketball. She passed away suddenly earlier this month, impacting the program which includes many of her former teammates. They wore shooting shirts with her photo on the front and “All For One” on their backs prior to the game.

Bryanna Brown, the newly-minted CIAA Player of The Year, said that Young was heavy on the minds of the team as jumped back into tournament play against the same team that eliminated it two years ago.

“It’s definitely personal,”  Brown said after her 20-point performance. “And so in order for us to just push through, we definitely play through her. She lives within us. So we were just happy to get this done today as we —  just as payback. It was payback and it was needed and we appreciate her being with us throughout every game, every time where we make her proud.”

The Lions started out the game lukewarm, but the Rams started out ice cold. The Lions led by 11 with 3:29 left in the first quarter. The Rams shot just 29.4 percent from the field in the first 20 minutes, but managed to trim it down to 18-12 after one quarter, then outscored its higher-ranked opponent 32-26 in the next two quarters to tie the game at 44 headed into the fourth quarter.

The two teams were statistically pretty even in most categories, and WSSU actually shot a better percentage (39.4 percent overall to LU’s 36.8 percent). But LUPA got to the line more often, hitting 15-of-19 free throws to help get it over the edge.

Lincoln head coach Janice Washington was excited about the win in her first CIAA Tournament appearance since taking over the program. She said she appreciated the resiliency her team showed.

“It is really exciting for this group,” she said. “They have worked so hard over the course of this season to get here. And so it’s very exciting to play in this environment and to have it feel like it’s a home game here right down the way in Baltimore. And so I really am proud of the resilience that they showed today.”

LUPA will rest on Thursday before taking on the winner of the Johnson C. Smith-Livingstone quarterfinal on Friday afternoon.