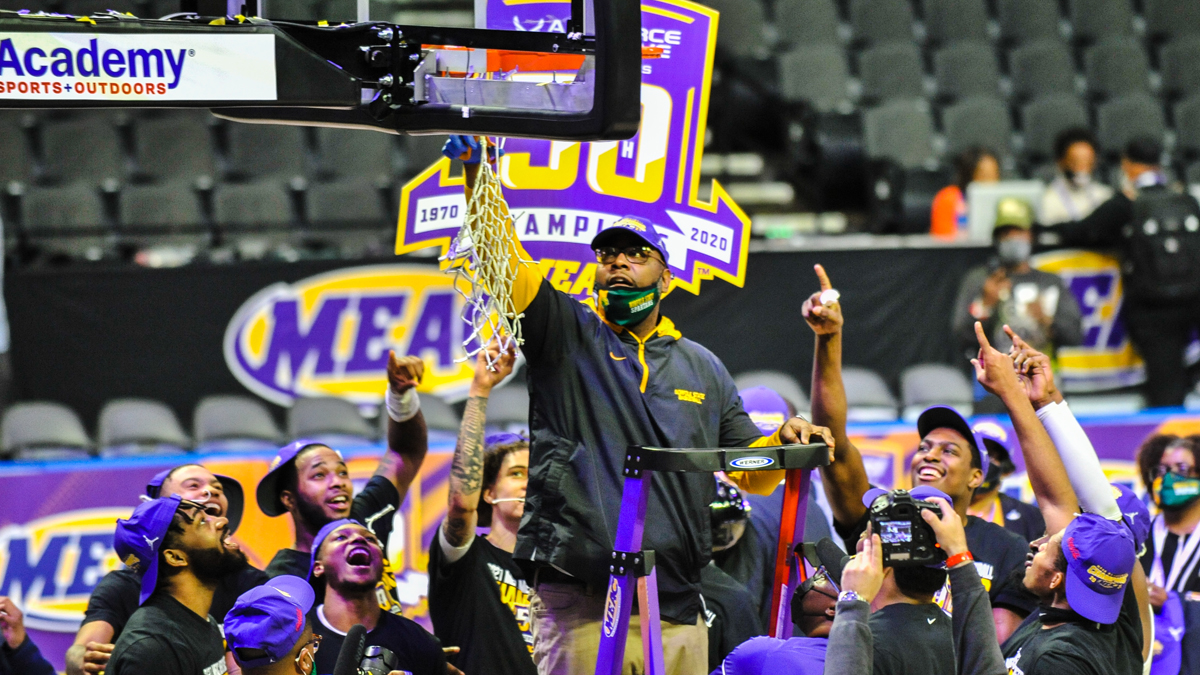 NORFOLK, Va. – Norfolk State University Director of Athletics Melody Webb announced on Friday that men’s basketball head coach Robert Jones has signed a five-year contract extension that will keep him at the helm of the Spartan program through the 2027-28 season.

“We are elated to announce this well-earned contract extension for Coach Jones,” Webb said. “Coach Jones and his staff have developed a winning program that has become a model of excellence among MEAC and mid-major universities. In addition to our many on-court successes, Coach Jones has also helped create a program the Spartan community can be proud of off the court, as well. We are excited about the future of Spartan Basketball under his leadership.”

“I am pleased to announce that I have signed a new contract extension with Norfolk State. I am grateful for the commitment the University is making to me, my family and the future of our basketball program,” Jones said. “I have tremendous pride in being a Spartan, and it is an honor to represent the city of Norfolk.”

RobertJones, who had two years left on his current contract, completed his eighth season as head coach of the Spartans this year and his 14th season overall on the men’s basketball coaching staff. He led NSU to the 2021 MEAC Championship and an NCAA Tournament First Four win over Appalachian State, the program’s second tournament win in as many appearances. He also guided the Spartans to a share of this year’s MEAC Northern Division title, making this year’s Spartans the first team in school history to win both MEAC regular-season and tournament titles in the same season. NSU was also recently named the HBCU national champion this year by Black College Sports Network.

As a result of the successful campaign, Jones was selected as this year’s HBCU Co-Coach of the Year by HBCU All-Stars LLC and CBS Sports. He was also a finalist for the Ben Jobe (top minority coach), Skip Prosser Man of the Year (success/integrity on and off the court), and Hugh Durham (top mid-major coach) awards, handed out yearly by CollegeInsider.com.

In 2019, Jones led the Spartans to the MEAC regular-season title with a 14-2 conference mark. NSU also notched a memorable postseason upset that year, knocking off No. 1 seed Alabama in the NIT. Jones has now led NSU to six postseason appearances in seven years of postseason play. Also in 2019, he was named the MEAC Coach of the Year and the Skip Prosser Man of the Year.

“I would like to thank my student-athletes, assistant coaches and support staff for making our success possible,” Jones added. “I also would like to thank NSU President Dr. Javaune Gaston-Adams, Director of Athletics Melody Webb and the NSU Board of Visitors for their continued leadership and trust in my ability to guide Norfolk State Basketball to even higher levels. I am excited about the future and cannot wait to start working on next season. Behold! The Green and Gold!”