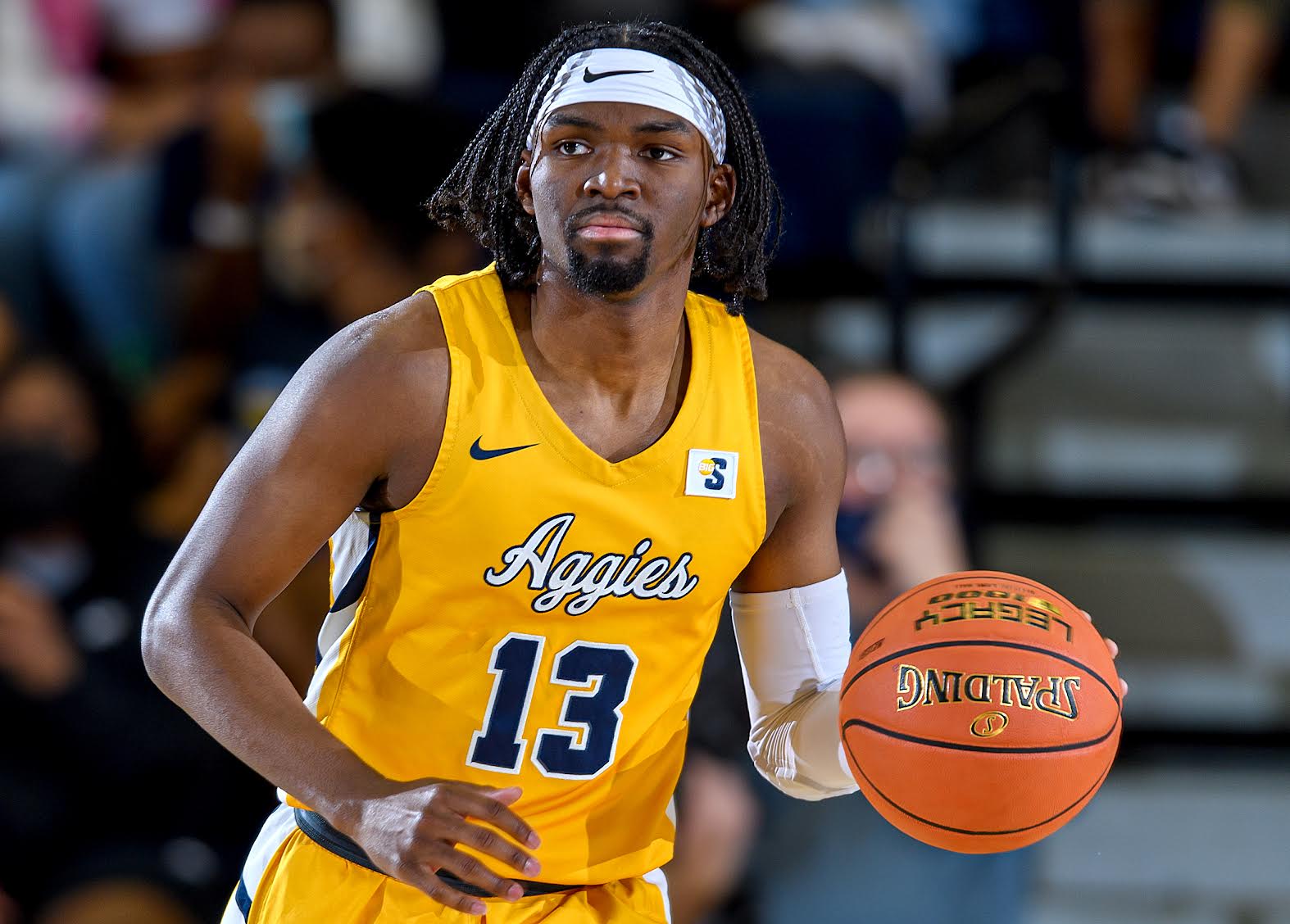 NC A&T needed a win to gain momentum as it moves towards its first Big South men’s basketball tournament coming up in Charlotte on March 1 at Bojangles Arena.

That’s exactly what the Aggies got in the friendly confines of Corbett Sports Center – or ‘Club Corbett’ as it is called – Saturday afternoon as they handed previously undefeated conference leader Longwood (18-6, 10-1) a 70-62 defeat.

“We followed our game plan to a T,” said victorious NC A&T head coach Will Jones of the big win. Jones said he wanted to limit Longwood’s 3-point shots and shut them down in the post.

“I told you guys last week, that in our second time through the league, we know what adjustments we had to make to give us a chance to win,” Jones said.

“I thought we did a big-time job.”

Langley to the rescue

It was the second consecutive win for the Aggies (11-15, 6-6) after dropping five straight. The A&T win snapped an 11-game win streak for the Lancers and was their first loss in 2022. It also avenged a 79-71 loss at Longwood where the Aggies led for most of the game on Jan. 26.

This time, it was veteran point guard Kameron Langley that come through.

Langley, who was the top scorer in the team’s win Wednesday over Charleston Southern, led the way this time with a game-high 17 points. The NC A&T and MEAC career assists leader, who is a career 55% free throw shooter, also hit all eight of his free throws in the game. He was 7 of 7 in the second half.

“He looks like the Kam Langley of old,” said Jones of his graduate senior. “Kam guided our team, led our team. He looks confident and sure of what he’s trying to do. He was the better point guard on the floor tonight.”

The game featured Langley’s battle with longtime friend and rival, Longwood graduate starting point guard Reggie Perkins. The local Greensboro products who played AAU basketball together and competed against each other in high school, battled through five seasons while Perkins was the starting point at NC Central in the Mid Eastern Athletics Conference. Perkins transferred to Longwood this season to finish out his career. He finished the night with five points and three assists in 28 minutes on the court.

Perkins, who was a key part of three MEAC tournament titles at NCCU and made three NCAA Tourney appearances, has not however fared well against Langley in head-to-head competition. He was asked after the game of their record against each other in those games.

“A lot to a little,” Perkins said, in Langley’s favor.

The decisive second half

Longwood didn’t score until the 13:23 mark of the first half while A&T built an early 8-0 lead. The Lancers fought back late in the period to pull within 30-27 at the break.

Perkins hit a 3-pointer to open the second half scoring and produce the first tie of the game at 30. The teams would produce eight more ties in the closely contested second half. The last was at 55 all.

NC A&T’s Justin Whatley’s 3-pointer off an assist from Langley with 2:55 to play broke the tie and ignited the crowd and the Aggies’ final run. After a Collin Smith layup, Whatley returned the favor, feeding Langley for his 3-pointer. The Aggies made five of six free throws down the stretch to keep the Lancers at bay.

Tyler Maye was the only other double-figure scorer for the Aggies with 12 points. Demetric Horton had nine points. Whatley chipped in eight points and led Aggie rebounders with nine. Langley also had team-highs of five assists and two steals.

Longwood got 16 points off the bench from Justin Hill. DeShaun Wade added 14 points.

At 6-6 in the Big South North Division, the Aggies are now third behind Longwood (10-1) and Campbell (6-5). The Aggies have four games left in the regular season, two on the road followed by two at home.

Jones said again that NC A&T scoring leader Marcus Watson (12.3 ppg.), who has missed the last three games while handling a personal matter, would return to practice on Sunday. He is expected to play at Hampton.