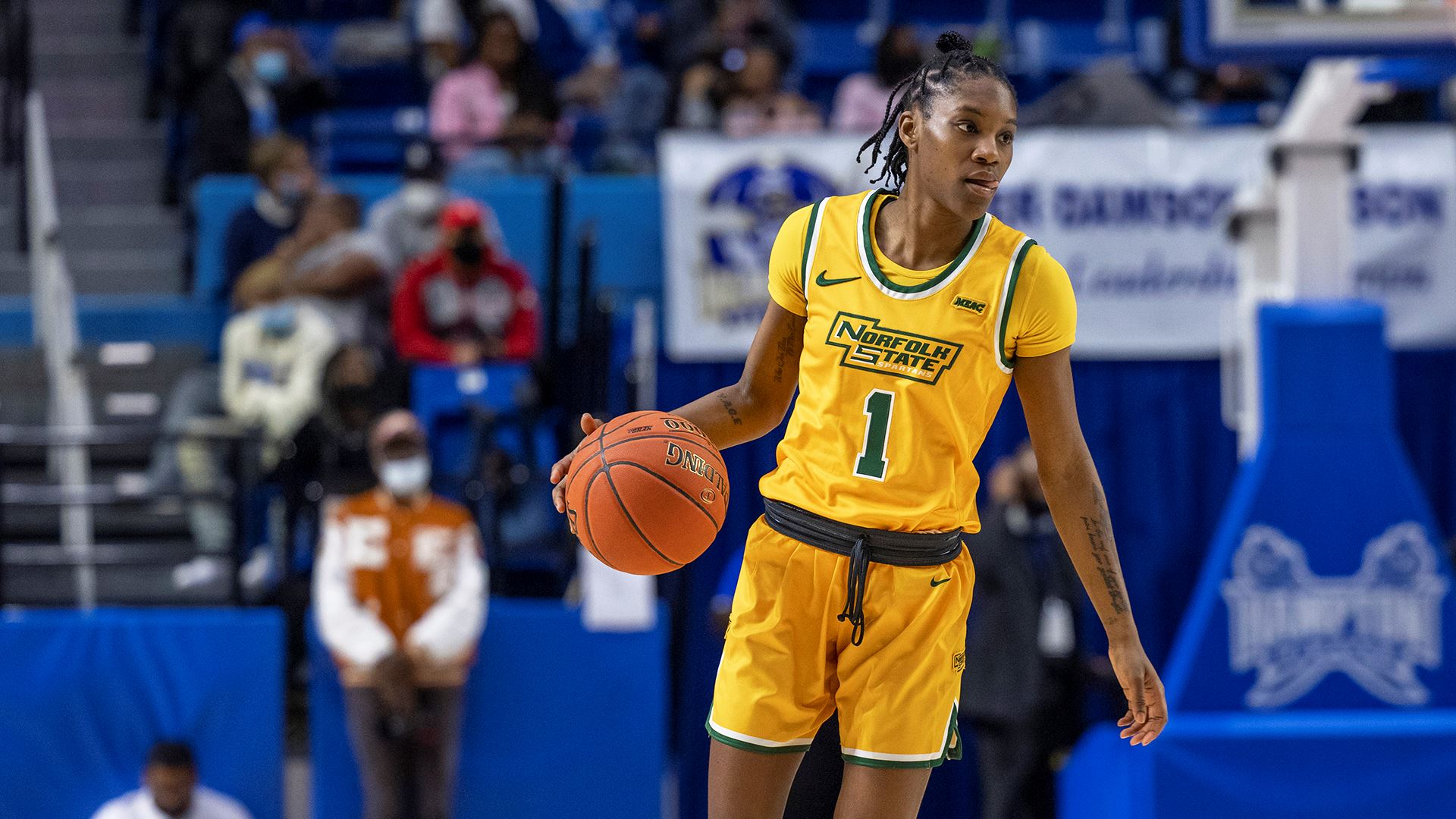 Norfolk State didn’t run away with this one, but it did come away with a win over Maryland-Eastern Shore to improve to 6-0 in MEAC play.

Norfolk, Va. – Deja Francis hit four free throws in the final ten seconds of the fourth quarter on Monday, securing a 53-48 win at Maryland Eastern Shore. Francis, the best free throw shooter in the MEAC, shot 11-of-12 from the charity stripe against the Hawks.

The Spartans improved to 10-7 overall, 6-0 in the conference with their sixth straight game in the win column. NSU is the only team in the MEAC with less than two losses in league play.

MDES controlled the tempo early in the first quarter, with Ariana Seawell scoring while being fouled on the first possession of the game. She would miss the ensuing free throw, but Brooklyn Bailey hit a 3-pointer and Zamara Haynes made a layup moments later to put the Hawks up 7-0.

Mahoganie Williams made a layup to put the Spartans on the board. Makoye Diawara scored off an offensive rebound a few minutes later, but NSU’s offense struggled elsewhere early on.

Trailing 14-4 in the first quarter, Janay Turner finally got the Spartans’ offense going with a step back 3-pointer. Diawora scored in the paint on the team’s next possession, before Crystal White knocked down a three of her own. Camille Downs made a mid-range jumper to cap off a 10-0 Spartan run to end the quarter. Despite the slow start, NSU had evened the score at 14-14.

Foul trouble plagued the Spartans all night, and it started in the first quarter with Francis and Fields each picking up a pair of personal fouls. Both eventually received their third late in the second quarter, forcing NSU head coach Larry Vickers to close the half using an unfamiliar lineup with his point guards sidelined.

Fortunately for the Spartans, Francis had made four straight free throws to put NSU up by six prior to picking up her third foul. A 3-pointer from Bailey and a mid-range pull up by Bairesha Gill-Miles cut the Spartans’ lead to one going into halftime.

NSU started the second half on a 5-0 run, with Turner’s second 3-pointer of the night putting the Spartans up six. But MDES continued to get to the free throw line, giving Downs her second and third personal fouls in the process.

Each time the Hawks clawed back, it seemed Turner came up with a much-needed bucket. Her third 3-pointer of the night gave the Spartans a four-point lead. MDES cut the lead to one again thanks to more made free throws, but this time it was Niya Fields that knocked down a deep ball to keep the Hawks at arm’s distance on the scoreboard.

NSU headed to the fourth quarter with a two-point lead, 38-36, setting the stage for a dramatic finish.

The game remained tight from the opening tip to the final buzzer, but NSU preserved a slight edge for the second half, with the Hawks’ last lead coming in the middle of the second quarter. When the Hawks tied things up with under four minutes left in the game, Downs responded with a crucial three to halt the momentum.

But the Spartans would have to finish the game shorthanded, as both Downs and Fields fouled out within 10 seconds of one another. Downs ended the night with nine points, six rebounds, and three steals. Fields had a night of threes, finishing with three points, three assists, three rebounds, and three turnovers.

Two Williams free throws gave the Spartans a five-point lead heading into the final minute, but Seawell scored with a foul on the other end. She missed her ensuing free throw, but NSU couldn’t convert on its next offensive possession, giving MDES the ball with under 30-seconds left and the Spartans clinging to a three-point lead.

NSU made the defensive stop when it mattered the most. The Hawks missed two attempts at the rim before Diawara secured the rebound and Vickers called timeout, allowing the Spartans to put the ball in the hands of their trusted free-throw shooter, Francis.

The junior guard knocked down both freebies, and made another pair in the closing seconds after a Hawks layup to secure the win. Francis shot 91.7 percent from the free throw line on Saturday, becoming just the eighth player in school history to shoot that high of a percentage on 12+ attempts in a game.

The Spartans head north again on Thursday for an evening matchup with Howard in Washington D.C, a game rescheduled from Jan. 15. The Bison (11-8, 5-2 MEAC) defeated Delaware State 83-49 on Monday.

349
The Latest in HBCU Sports and Culture