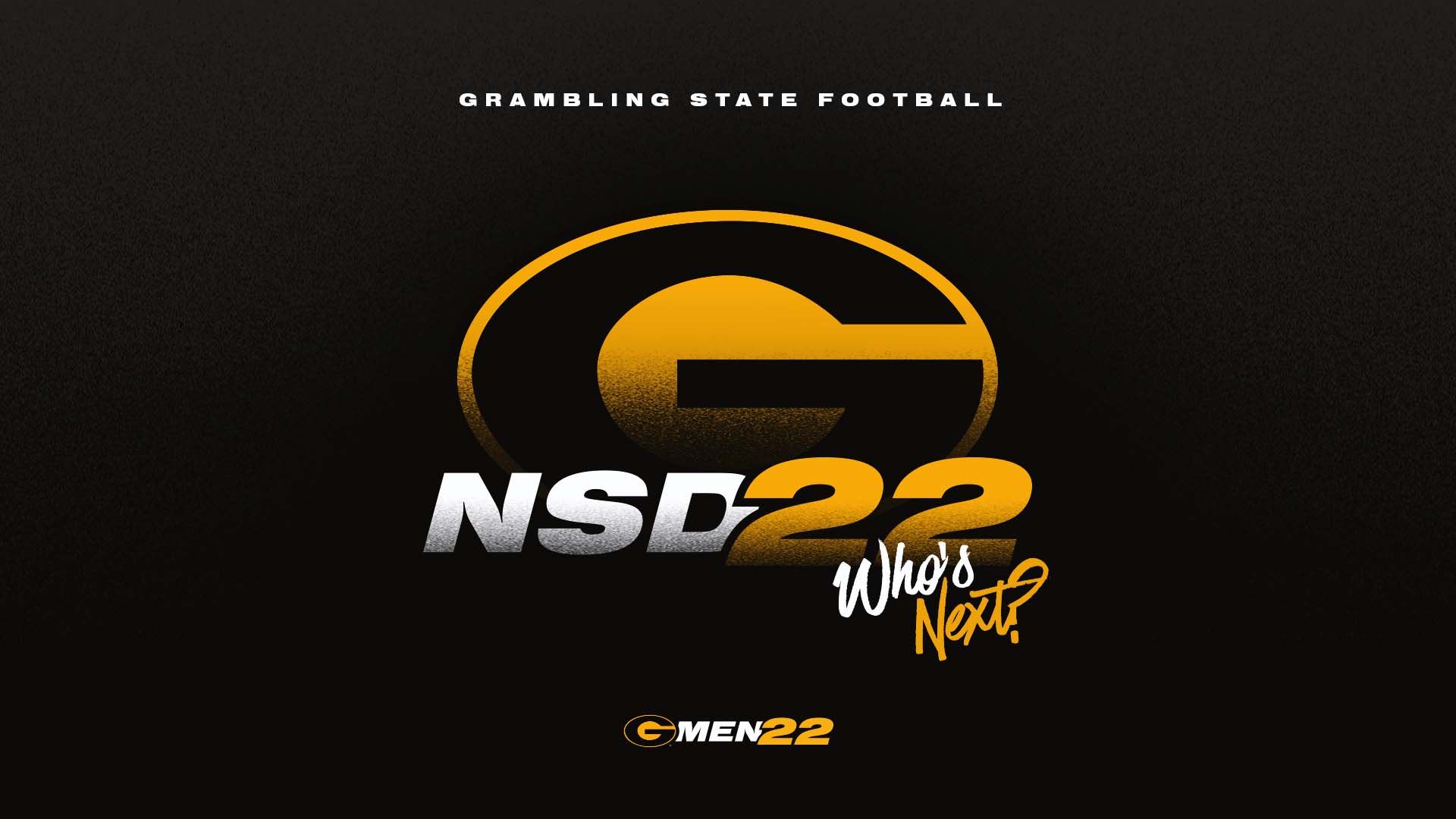 “We’ve put in a lot of work over the past month, identifying prospective student-athletes, hosting them on official visits and really showing them what Grambling State has to offer.”

“This is an exciting day and time for our football team,” Jackson said. “We’ve put in a lot of work over the past month, identifying prospective student-athletes, hosting them on official visits and really showing them what Grambling State has to offer. I think you will be really excited to see who we signed and we are looking forward to seeing what they can do on the football field.”

Among the 35 players signed was the addition of Kajiya Hollawayne (UCLA), Ja’ron Waters (Oregon/Southern Utah) Maurice Washington (Nebraska) and Micah White (TCU as mid-year enrollees. The 19 student-athletes have been enrolled in the university this semester and will participate in spring practice and the annual Black and Gold Spring Game, which is set for April 2 at Eddie G. Robinson Memorial Stadium.

Donte Starks (Marrero, La./LSU) LB, 6-1, 217, Fr. Played at Coahoma Community College where he saw action in six games during the 2021 season … He registered 16 total tackles, a tackle for a loss and a sack … One of the best linebackers in the state of Louisiana due to his speed and toughness … A consensus four-star recruit who is listed at No. 135 on the ESPN300 … Regarded as high as the No. 6 prospect in the state and the No. 114 player in the nation according to 247Sports … Ranked the No. 8 player in the state and the No. 12 inside linebacker by ESPN … Recorded 129 tackles, 17 tackles for loss and 7.5 sacks during his senior season at John Ehret High School … Invited to compete in the Under Armour All-America Game … Attended the same high school as former LSU running back and current Kansas City Chief Darrel Williams … Coached by Marcus Scott…. Chose Grambling State over rival Southern, Bethune-Cookman, LSU, Auburn, Clemson, Arkansas and Florida.

Noah Bean (Simi Valley, Calif./UNLV)   TE, 6-2, 235, Gr.   Transferring to Grambling State as graduate student from UNLV…Played 24 games at UNLV…A two-year letterwinner under coach Josh Henderson at Grace Brethen HS… Rated as a three-star prospect by Scout. … Earned All-Ventura County First Team honors as a senior and played in the Ventura County All-Star Game … Earned all-league honors as a junior and was part of a team that went 12-2 … Also earned a varsity letter at Calabasas HS under coaches Casey and Rick Clausen as a sophomore.

Devin Bush (New Orleans, La./Arkansas)
DB, 6-0, 200, Jr.  ARKANSAS – 2021: Played in three games, with one solo tackle. 2020: Played in three games … Saw action on four defensive snaps and five special teams snaps … Played all four defensive snaps at cornerback in the win over Ole Miss (Oct. 17) … Played one special teams snap at Florida (Nov. 14) and four against LSU (Nov. 21). 2019: Played in four games of the first five games as a true freshman for the Razorbacks in 2019, missing the season opener … Appeared in 29 snaps, 10 on defense and 19 on various special teams plays …  Did not record any statistics. HIGH SCHOOL: Four-star prospect by Rivals, 247Sports and ESPN … Ranked as the No. 16 cornerback in the country by ESPN … Rated as the 13th overall player in the state of Louisiana according to ESPN and Rivals … Landed in ESPN’s Top 300 at No. 219 in the 2019 recruiting class … Three-year varsity letterwinner at Edna Karr High School in New Orleans, Louisiana … Helped Edna Karr to a spotless 15-0 overall record, claiming the 2018 Allstate Sugar Bowl/LHSAA Non-Select Prep Classic Class 4A Championship by a score of 28-20 as the top overall seed on Dec. 8 … Second-straight 15-win season … Third consecutive state title, also leading Edna Karr High School to championship victories in 2016 & 2017 … Posted two interceptions as a junior on the 2017 squad … Chose Grambling State over Arkansas, Auburn, Florida, Georgia, Kentucky, LSU, Mississippi State, South Carolina, Tennessee, Clemson, Florida State, Oklahoma.

Codie Hornsby (Dallas, Texas/Delaware State)   OL, 6-3, 280, Fr.   Two-way standout lineman at Skyline HS …helped lead team to a district championship as a senior in 2019 … credited with 40 pancake blocks as an offensive lineman during senior season … recorded 48 tackles, including 18 behind the line-of-scrimmage, and eight sacks.

Brison Huey (Garland, Texas/Naaman Forest HS) WR, 6-4, 205, Fr. Played wide receiver at Naaman Forest High School where he saw action in 20 games during his junior and senior season… He caught 27 passes for 405 yards, with four touchdowns… He averaged 15.0 yards per catch and 20.3 yards per game.

Cameron Jones (Mansfield, Texas/SMU)  DB, 6-1, 199, Sr.   HIGH SCHOOL: Played for Daniel Maberry at Mansfield High School as a senior… Registered 106 tackles and two forced fumbles… Helped team to an 11-2 record and an appearance in the UIL 6A Division 2 Regional round… Also spent time at running back and wide receiver… Returned two kickoffs for TDs… Named second team 6A All-State by the Fort Worth Star-Telegram… Was a first-team all-district selection as a junior at Euless Trinity…Played seven games in 2018 before suffering an injury… Registered eight tackles, five solo…In 2019, he played in three games… Registered nine solo tackles, including one TFL for four yards.

Jaylen Martin (Los Angeles, Calif./California)   DB, 6-2, 190, Jr.   Martin attended Roosevelt High School and lives in Los Angeles. He was a three-star recruit who was a member of Cal’s 2019 recruiting class. He chose Cal over offers from Utah, Colorado, Oregon, Washington State, San Diego State, BYU, Boston College, Rutgers and Colorado State. Martin redshirted his first season at Cal in 2019, played in two games in 2020, when he recorded two tackles, and played in two games in 2021, when he had one tackle. He played against Stanford and Colorado this past season and recorded his one tackle against Colorado.

Chris Satterfield (Spring, Texas/Abilene Christian)   DB, 5-10, 190, Jr.   Lettered in football at Klein Oak High School in Spring, Texas… All District selection junior and senior season … Second Round exit (Sophomore year at Klein)… Third round exit junior and senior year… 10-3 as a starter junior year and 10-3 and a senior. 2020: Competed in 4 games throughout the 2020 season as a freshman… Finished the year with 9 total tackles (3 unassisted).

Maurice Washington (Stockton, Calif.)  RB, 6-1, 190, Jr. NEBRASKA: Career 100-Yard Receiving Games by a Running Back (2). 2019: Played in each of Nebraska’s first seven games in 2019, rushing for 298 yards and one touchdown while catching 12 passes for 162 yards and two scores. 2018: Washington earned immediate playing time as a true freshman, appearing in 11 games with starts against Ohio State and Iowa. He showed flashes of his big-play ability throughout the season, totaling 455 rushing yards and 221 receiving yards. Washington displayed his versatility by ranking third on the team in rushing yards and fourth in receiving yards, while having both a 100-yard rushing game and a 100-yard receiving game. He was also the Huskers’ top kickoff returner with 204 yards on 13 returns. Washington averaged 5.9 yards per carry and scored three rushing touchdowns, while adding one touchdown reception. His 24 receptions were the second-highest total every by a true freshman at Nebraska, regardless of position. HIGH SCHOOL: Was a three-time state champion at Trinity Christian Academy in Texas and was MVP of the 2018 Under Armour High School All-America Game. Washington carried the ball 123 times for 1,253 yards as a senior in 2017 for Coach Aveion Cason. Washington averaged 10.2 yards per carry and 113.9 rushing yards per game and scored 15 rushing touchdowns. He also excelled as a receiver out of the backfield, catching 26 passes for 582 yards and nine touchdowns, while averaging 22.4 yards per reception. Washington amassed 2,112 all-purpose yards – an average of 192.0 yards per game – and boasted an average gain of nearly 13 yards every time he touched the ball in 2017. He set an Under Armour All-America Game record for touchdowns scored (3) and became the first player in the 10-year history of the game to post both a rushing and receiving touchdown. Washington was tabbed as a four-star prospect by ESPN and 247Sports. ESPN listed him as the No. 93 overall prospect in the country and as the nation’s fifth-best running back. Washington also visited Arizona State and had offers from many of the nation’s top programs, including Clemson, Ohio State, LSU, USC and Washington, among others.