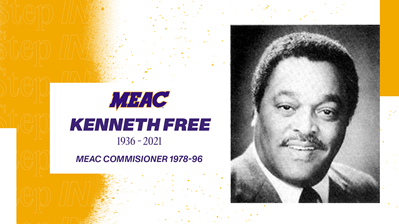 Ken Free, the first full-time commissioner of the MEAC, has passed away. He was instrumental in helping the fledgling league secure D1 status.

“Ken Free was a consequential figure not just in the MEAC, but in all of college athletics,” MEAC Commissioner Dennis E. Thomas said. “From securing Division I status for the conference’s member institutions to serving on the Division I Men’s Basketball Selection Committee, to tell the history of the MEAC without speaking of Ken Free would be a glaring omission. We mourn his passing and send our condolences and prayers to the Free family.”

“We are saddened by the passing of former MEAC Commissioner Ken Free and send heartfelt condolences to his family,” MEAC Commissioner-elect Sonja Stills said. “He was a trailblazer in the field of collegiate athletics and laid the foundation for the MEAC that we will continue to build upon.”

Free was the first full-time commissioner of the conference, taking over in 1978. During his tenure, he was instrumental in the conference’s member institutions receiving Division I status from the NCAA, which occurred in 1980. In 1987, Free became the first African-American to be named to the NCAA Div. I Men’s Basketball Selection Committee.

Free, a graduate of North Carolina A&T State University, served as commissioner of the conference until June 1996. He was inducted into the MEAC Hall of Fame in 1999.