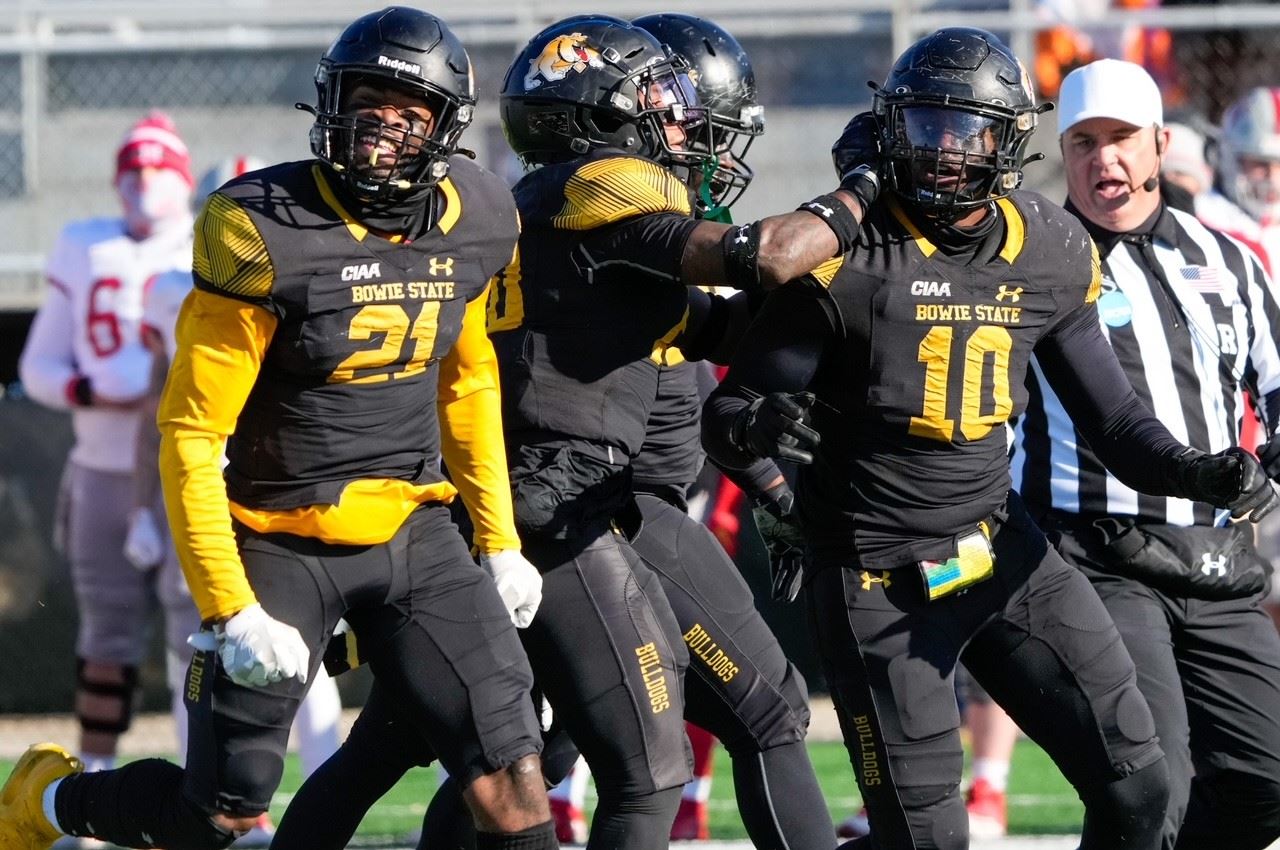 The stingy Bowie State defense kept the Bulldogs in the game until the offense could pull out a win. Now BSU moves into uncharted territory as it goes into the regional finals for the first time vs. Valdosta State.

Amongst the Top HBCU Performances list this week has to be CIAA champion Bowie State pulling out a 13-10 win over Newberry in a NCAA Div. II regional semifinal.

Damon Wilson’s troops combined a cat-quick defensive effort, a quick-response offense and sound special teams’ play to pull out a victory in the final two minutes.

The Bowie State defense gave up 50 yards on Newberry’s first three plays from scrimmage and only allowed another 114 yards for the rest game. BSU defenders repeatedly stopped the Wolves jet-sweep attempts in the backfield, never alllowing NU runners to turn the corner. The Bulldogs registered two sacks and six tackles for loss. Newberry converted just 4 of 16 third-down attempts.

They limited Newberry quarterback Dre Harris to 12 completions in 27 attempts for just 84 yards. The defensive pressure led to six quarterback hurries and one interception.

The chief disruptors for the Bulldogs were 6-1, 340-pound nose tackle Ellison Jordan and linebacker Wesley Bowers. Both had nine solo stops and a sack. All-CIAA linemen Joshua Pryor and Jonathan Ross pressured Harris all day. Pryor was credited with three quarterback hurries. Ross had 1.5 tackles for loss to go along with five tackles.

The top individual defensive HBCU performance goes to Florida A&M senior safety Markquese Bell. While the Rattlers were being manhandled 38-14 by Southeast Louisiana in a first round FCS playoff game, Bell was burnishing his reputation as the top HBCU NFL prospect.

His was a display reminiscent of former South Carolina State and now standout Indianapolis Colts linebacker Darius Leonard’s 19 tackles in the Bulldogs’ 59-0 loss at Clemson in 2016. Leonard had 19 tackles in that game and blocked a field goal. The display got the attention of NFL scouts. Two years later Leonard was a second round pick in the NFL draft. After two of his first three years in the league as a first team all-Pro, he is now the highest paid linebacker in the NFL

Bell had Leonard-like production Saturday in the Rattlers’ loss. Bell racked up 16 tackles, all solo efforts, and made several bone-jarring hits on the back end of the secondary. On one hit, he forced all-American QB Cole Kelley to cough up the ball.

While his team was being torched for over 500 yards on the day, he also inspired the defense to keep playing and hitting. They picked Kelley off early in the game and put several hard hits on him late.

Though their numbers were not prolific, Bowie State’s offensive unit, and particularly junior quarterback Ja’rome Johnson, came through when they were needed. Johnson and the offense answered quickly each time Newberry went ahead.

Johnson, despite nursing a sore ankle, hit the Wolves with a 68-yard scoring pass to Keshane Hinckley only minutes after Newberry went up 7-0 after a 0-0 halftime tie. When the Wolves went ahead 10-7 with just under three minutes left, Johnson uncorked a 52-yard pass to Kwincy Hall that set the Bulldogs up at the Newberry six. Two plays later, he connected again with Hinckley for the game-winner with just over 90 seconds left.

Johnson had spent the previous two days in the hospital taking care of his newborn daughter, Wilson said after the game. He had not participated in Friday’s walkthrough but showed up Saturday morning ready to play. “That shows the kind of character he has,” Wilson said. “The team rallied behind that.”

The win vaults the Bulldogs and Wilson to the Super Region II finals for the first time. BSU (12-1), the 2nd seeded team in the region, will travel to top seed Valdosta State (10-1) for the game that could vault the Bulldogs into the national semifinals, the Final Four.

Not to be discounted from Bowie State’s win was outstanding special teams’ play.

Senior punter Kenny Amaya flipped the field several times, seemingly barely getting off many of his season-high nine punts. But the punts covered 304 yards, a 34.2-yard average, with one downed inside the 20. “He’s been our MVP ever since he got here, for four years,” said Wilson in the postgame press conference.

WIde receiver Kwincy Hall not only had 80 yards on four receptions including the 52-yarder in the game-winning drive, but his 28-yard kick return to near-midfield set up that game-ending sequence.

No one was more special however Saturday than Grambling State placekicker Garrett Urban. Urban was good on kicks from 39, 36, 27, 27 and 25 yards. The last one came with :02 seconds left and allowed the G-Men to break a three-game losing streak to rival Southern in the season-ending Bayou Classic.

Offensive balance was not on display for either Mississippi Valley State or Grambling State in their wins.

MVSU running back Caleb Johnson ran and ran and ran some more in the Delta Devils win over Prairie View A&M. Johnson carried 40 times for 193 yards and scored two touchdowns. MVSU kept the ball on the ground on 51 of its 63 plays from scrimmage.

Grambling employed a similar offensive strategy in its 29-26 win over Southern. QB Elijah Walker and C. J. Russell combined for 40 carries and 269 yards. Walker carried 19 times for 168 yards while Russell had 21 for 101.

Keshane Hinckley (5 rec., 132 yds.) and Kwincy Hall (4 rec., 80 yds.) caught passes for all but 32 of Ja’rome Johnson’s 244 passing yards Saturday. In past years, Bowie State receivers have had gaudy numbers. Not this year. Hinckley and Hall came in with just 24 catches each. Neither was in the top 15 among CIAA pass catchers, but they certainly came through Saturday.