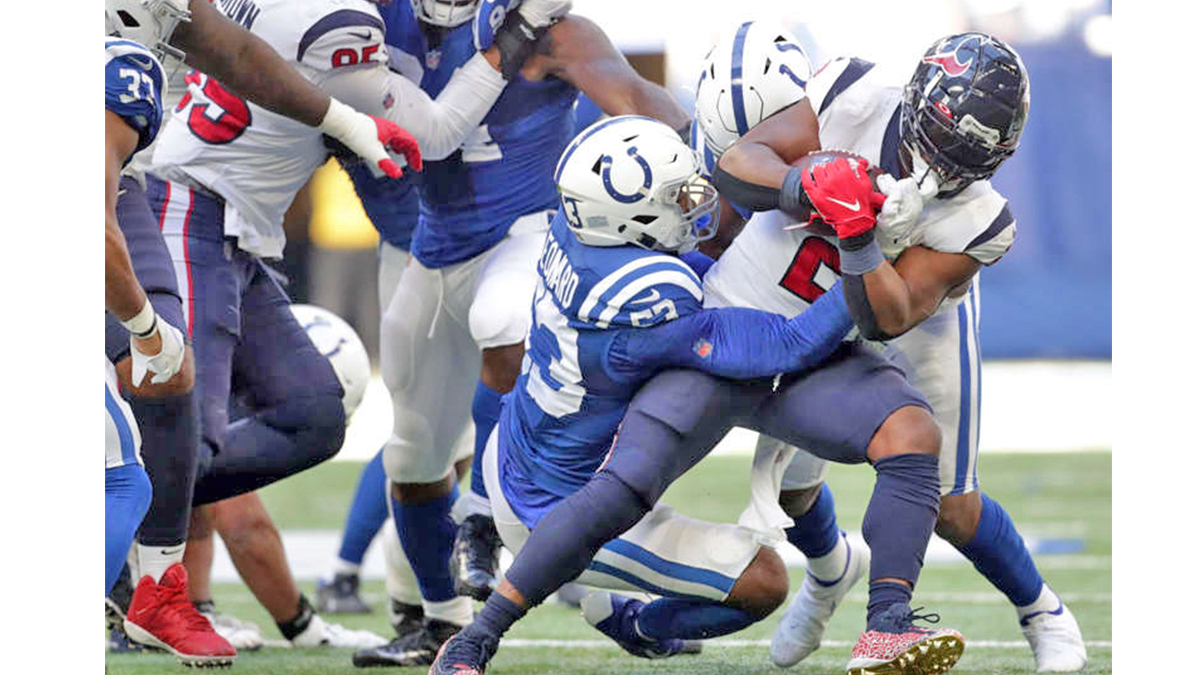 South Carolina State product Darius Leonard, the all-Pro linebacker for the Indianapolis Colts was at it again, disrupting the Houston Texans this week. He is again the HBCU NFL Player of the Week. See how all the top HBCU players in the NFL performed here.

The player known as “The Maniac” is again at the forefront of the HBCU NFL ProFile for games of October 14-18.

South Carolina State product Darius Leonard, in his fourth year with the Indianapolis Colts, was up to his disrupting ways Sunday in a game vs. the Houston Texans. Leonard forced a fumble, picked off a pass, had a hit on the quarterback and had seven total tackles, six of the solo variety, in the 31-3 Colts’ win.

Leonard has been the inspirational leader as the 2-4 Colts have struggled early this season. He was particularly so two weeks ago as he tried to will his team to a victory over Lamar Jackson and the Baltimore Ravens, perhaps the hottest team in the NFL. Leonard had a season-high 13 tackles, six solos, and played his heart out in the 31-25 overtime loss.

He described that game as “the worst loss of my career.”

Also this week, North Carolina A&T product Brandon Parker stepped up in the midst of the turmoil on his Las Vegas Raiders squad after the dismissal of head coach Jon Gruden. Parker started at left tackle, as he has for the past two games, and played all 56 offensive plays in the Raiders’ 34-24 win over Denver.

The Raiders, who had looked listless in a 20-9 loss to Chicago a week earlier at the beginning of the Gruden controversy, bounced back with 427 yards of offense in the win over the Broncos. Parker was no small part of that 86-yard rushing and 341-yard passing effort. Vegas QB Derek Carr was only sacked twice.

There were plenty of HBCU players that performed on special teams this week. Few stood out. SC State’s Antonio Hamilton gets the nod this week after his one special teams’ tackle as his Arizona Cardinals stayed undefeated with a 34-6 domination of the Cleveland Browns.

– #53 DARIUS LEONARD, LB, Indianapolis (4th season, SOUTH CAROLINA STATE) – In 31-3 win over Houston, Leonard had seven total tackles, six solos, one hit on the quarterback, a forced fumble and an interception. Leonard was in on 69 defensive snaps (89%) and two special teams’ snap (8%).

– #33 ANTONIO HAMILTON, DB, Arizona (6th season, SOUTH CAROLINA STATE) –  In 34-6 win over the Cleveland, Hamilton had one special teams’ tackle. He logged 14 plays on special teams (61%) and no plays on defense.

– #71 TYTUS HOWARD, OG, Houston (3rd season, ALABAMA STATE) – Starting at left offensive guard in Texans’ 31-3 loss to Indianapolis, Howard and the offense generated 124 rushing yards and 243 passing yards and gave up two sacks. Howard was in on all 75 offensive plays (100%) and one special teams’ play (4%).