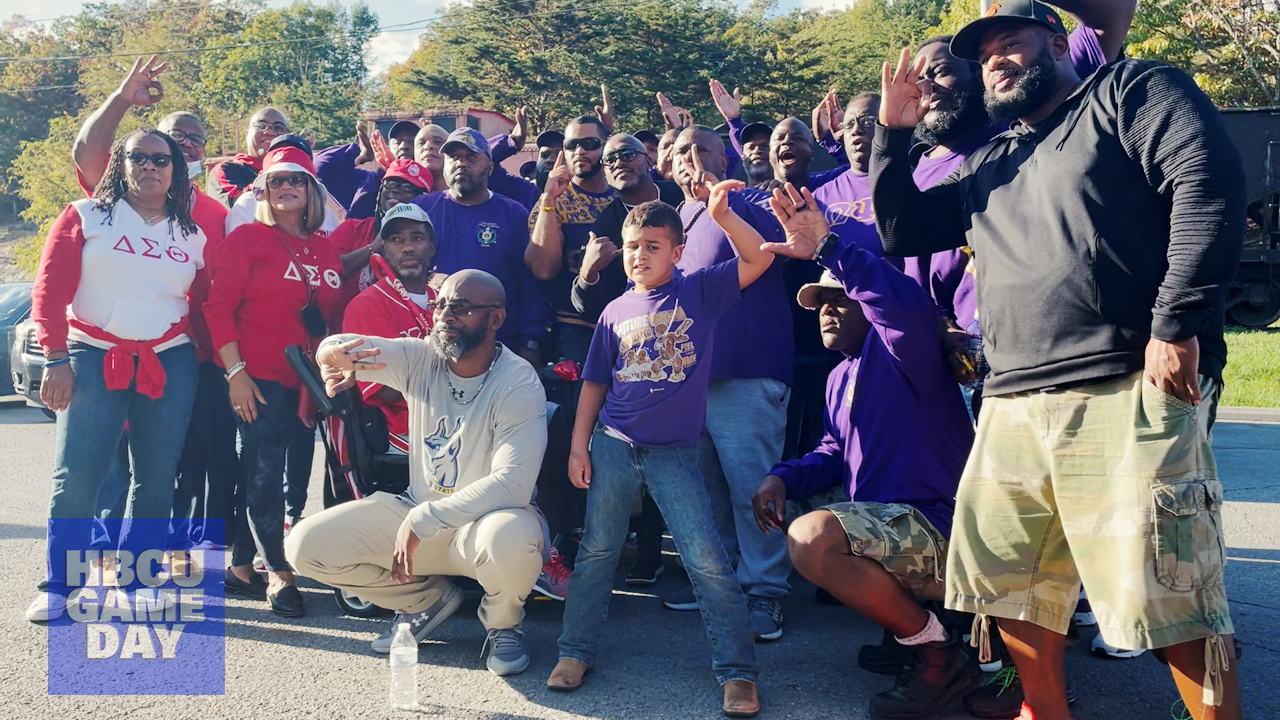 An HBCU homecoming 40 years in the making

Every HBCU homecoming is special. But for the alumni at Bluefield State College, it means a little bit more this year

What does your HBCU homecoming mean to you? That’s the question that drove me to the hills of West Virginia on a wet, dark October night.

My destination was Bluefield State College. For the first time since the Jimmy Carter Administration, alumni of this HBCU with a complicated past had a chance to partake in a traditional HBCU homecoming — with a football game.

Bluefield State College is best known as one of the two HBCUs — both in West Virginia — whose enrollment is majority white. And, to this day, that remains true. Few people know how it happened, and most don’t really care to know why. It is simply written off as an institution where the “H” is little more than an archaic designation bestowed upon the university in 1964.

But to the alumni who traveled near and far for their alma mater’s game against the University of Fort Lauderdale on Oct. 9, their HBCU experience means just as much as it does to anyone else.

It was overcast when I woke up on Saturday morning to go to the game. To be honest, I was a little worried. You know how our people can be about rain.

But the clouds remained over the mountains as I rolled through what appeared to be the town’s main food strip. A few turns later I found myself riding in front of a school on a sloping hill. It was Bluefield College. You may remember that earlier this year that school made national headlines when its president forbade its student-athletes to take a knee during the national anthem. So many people mistakenly took it for Bluefield State that I wrote an article and did a post to try to clarify the difference.

One of the first people that I ran into when I got to Mitchell Stadium, where both universities play their home football games, was Jay Gray. Gray is a Bluefield, VA native who played basketball in late 90s. He was one of several alumni who spoke to me this winter about making sure there was clarity regarding that situation.

“We had to make sure to let everybody know that had nothing to do with us,” Gray said. “I don’t think our administration would have had a problem with that. I don’t want to misspeak, but I don’t think that would have been an issue at our campus.”

The two campuses are literally about a five-minute ride from each other. I quickly made a pilgrimage to the school originally known as Bluefield Colored Institute when it was founded back in 1895. Its first president was named Hamilton Hatter. It sits on another sloping hill, directly against a railroad. There hasn’t been any on-campus housing since 1968 — until this year.

As a history buff, I wanted to view more of the campus, but time wasn’t on my side. I had to get to Mitchell Stadium to talk to alumni as they celebrated their HBCU Homecoming.

For Gray, standing in his Bluefield hoody, it was a surreal moment. He didn’t just play ball at BSC. He’s from this soil. His grandmother was a 1948 graduate of Bluefield State College. There hadn’t been a football program at the school since he was a toddler. The closest thing they had to this HBCU homecoming was a local high school football game. He was taking it all in.

“Just to be out here with everybody — fellowshipping — we hadn’t done this. This is new to everybody,” Gray said. “But we’re here every home game now. So we’re just going to make the best of it. Hopefully, get some more people up here and get the enrollment up on campus.”

After a few quick convos and a great piece of chicken hot off the grill courtesy of J & Z Grilling, I started to make my way up the hill to the stadium. I was greeted by a golf cart wheeled by Derrick Price, the former basketball coach and current AD at Bluefield State. He is the man who President Robin Capehart tasked with putting together a plan that would start a football program from scratch in roughly a year during the middle of a global pandemic.  He gave me a ride up the hill and told me, with confidence, that they were building something special.

Football being back was special for Eldridge Keys and his wife, Augrey Wisdom-Keys.

Eldridge Keys came to Bluefield State in the 1970s from Miami to play football. He did that, along with getting his degree and finding a cheerleader who would become his wife and partner. He was obviously happy that the football program was back and adding to the black male enrollment at the school.

“They are recruiting people from a lot of different places now,” Keys noted after looking at the pre-game program.

His wife’s roots at the college run deep. It is a part of her family legacy as her mother was a 1938 graduate who she says was a classmate of the writer of the school’s alma mater.

That appears to have been strategic.

During a time of political unrest in the nation and in the state, a bomb went off on the BSC campus in 1968. Shortly thereafter, the dorms were shut down. That, along with the declining black population in the state led to the school’s dwindling black enrollment. It became a commuter school that at one point had less than 10 percent black enrollment.

Stan Rogers came to Bluefield State from Gate City, VA where he led his team to a state title in 1970. By the time he arrived at BSC, there was no on-campus housing for the football team or anyone else. He told me they stayed in the homes of people in the community.

“It was a great experience, the teams were close. We had some very good men. My experience was a time — like anything else, it was challenging — but Bluefield State was like a real family,” Rogers told me.

He became a high school coach after leaving BSC.

“I know it’s expensive. But the people wanted it again, and it’s back,” he said. “It’s awesome and I’m thankful to be here today.”

I’m almost 80, and I traveled a long way

Rogers and Keys were two of the younger football alumni I talked to on Saturday.

Dave Madison played football at BSC in the early 1960s, graduating in 1964. When I asked him how excited he was to have football back, the Lexington, Virginia native tried to put it in perspective. He traveled up from South Carolina.

Wearing a shirt that said “Never underestimate an old man who graduated from Bluefield State” Madison also traveled up to Charlotte to see the team play, and beat, Johnson C. Smith of the CIAA. As grateful as he was to have football back at his alma mater, he did have a slight gripe — the school’s alma mater wasn’t sung after the victory.

“I was disappointed,” he said with only a hint of a frown. “And these people probably don’t even know it.”

It doesn’t help that there is no band yet, but AD Price assured me that it was in the works.

“Just thrilled that we’re back after 41 years to a football schedule so we can get the kids back on campus. So everybody will know the alma mater,” he said. “It helped me to develop skills and things that have sustained me to this point — and I’m 80 years old. I appreciate all of the instruction I got, and the encouragement, the life lessons.”

The Roanoke, VA native said his time at Bluefield was crucial to his development.

“It gave me my life goals. I got a good job when I left. Coached football in Danville, VA. Been in Danville ever since,” he said. “I just love to see boys play. The youth get the chance to do some of the things that we did. And keep them out of trouble.”

The boys from Bluefield most certainly did play. The team beat Ft. Lauderdale, another football program in its inaugural season of football, 23-9. It was the third win in a row for the program (not counting a forfeit by UNC Greensboro’s club team) but the first at home since 1980.

A crowd of about 1,000 people were there to watch history being made. It was pretty evenly split along racial lines, which would make sense given the makeup of the school and the region. The crowd largely wore Bluefield State merchandise while cheering for the team.

However, there were a group of ladies in pink and green cheering them on. The ladies of Alpha Kappa Alpha Sorority, Inc. brought out a group of lettered blocks that pretty much anyone entering the stadium could see. “AN HBCU BSC LEGACY.”

That idea was credited to Mildred Hoskey. She beamed with pride as she wore an “HBCU Grad” shirt with pink and green ivy while explaining the motivation behind the statement.

“We want to make sure that we’re not forgotten that we are an HBCU. There are many advantages that the school’s current having because they are an HBCU,” she said. “We have a legacy to uphold, and we want our children to want to come to HBCUs. We want them to know what the experience is all about.”

It was an HBCU homecoming 41 years in the making. As I left Bluefield, headed down the mountain, I thought about how missing homecoming in 2020 was a tough pill to swallow. I couldn’t imagine how the alumni of Bluefield State College have felt after not only having their football program taken from them, but in many ways, their identity as an HBCU as well. At least one of them is back and hopefully the two will go hand-in-hand as housing makes it a more attractive option for black students as a whole.

An HBCU homecoming 40 years in the making