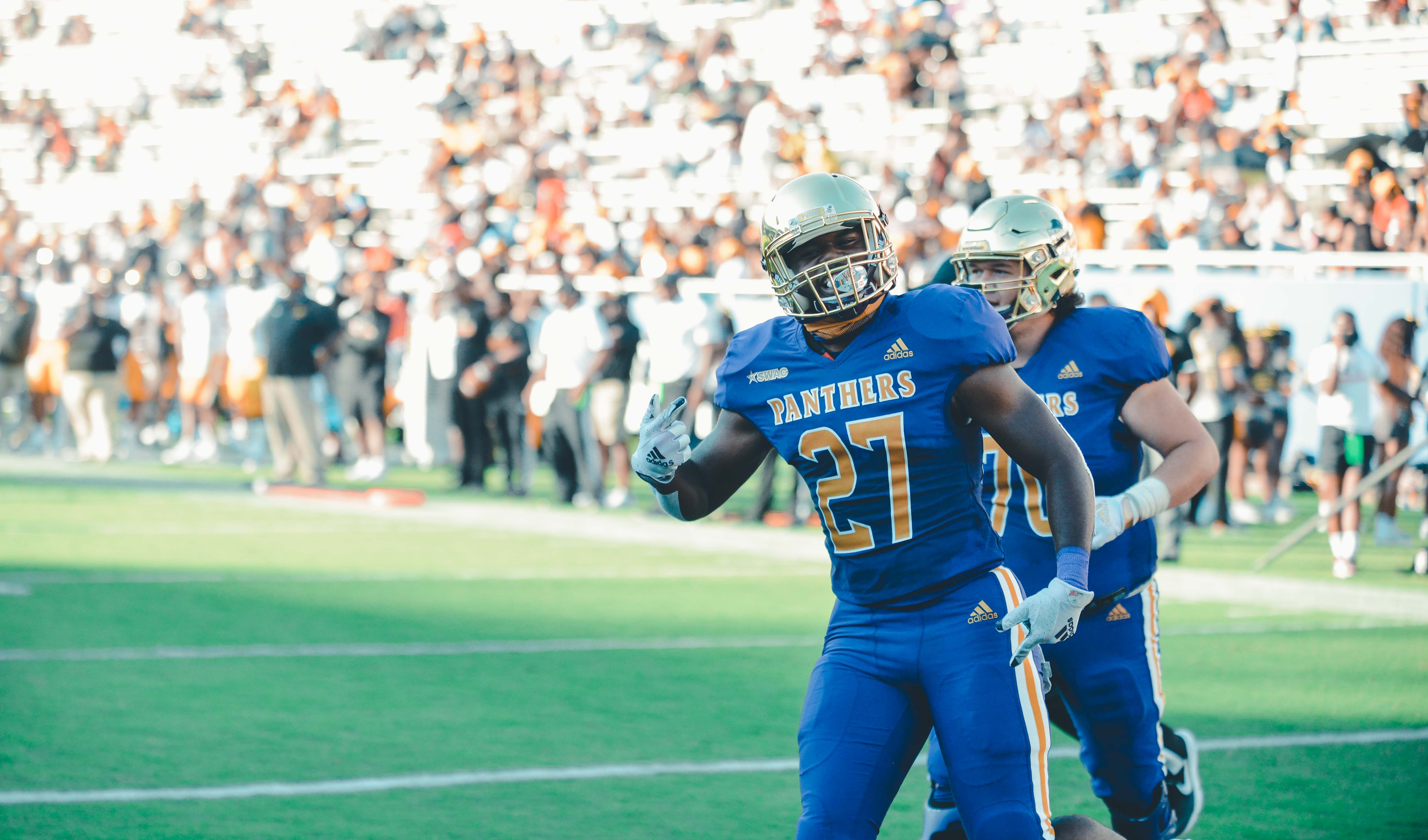 PRAIRIE VIEW – The Prairie View A&M offense put up big numbers Thursday night and the defense put together several game-saving, second-half stands to give the Panthers a 27-17 win over the University of Arkansas-Pine Bluff at Panther Stadium.

“We still have a long season and I think we are out in the front right now,” said head PVAMU football coach Eric Dooley.  “This is a big turnaround after the first couple of games, but there are some things that we need to sharpen up on and get better with.  I keep saying that this conference is very competitive.

How it Happened:
Although the Panthers had the ball first, UAPB struck first with a 33-yard field goal with 9:57 remaining on the board.  Not long after PVAMU’s Pass ran into the end zone to give the Panthers their first score of the game on a 59 yard run with 9:27 left on the clock.

Prior to the end of the 1st quarter PVAMU took a 14-3 lead when graduate student Lyndemain Brooks took it to the house on an 83 yard rush with less than two minutes left in the quarter.

In the middle of the second quarter, UAPB struck on an 82 yard pass from quarterback Xzavier Vaughn to push the score 14-9 but still in favor of the Panthers.

With five minutes left in the first half of play, Pass ran it in for a short four yards to advance the score to 21-9 going into the half.

It was the Panthers who came out swinging midway through the second half of play to score a 34 yard field goal by Luis Reyes pushing the score to 24-9.  It didn’t stop there for PVAMU as they put their final score on the board with just 1:09 left on the game clock going into the fourth quarter.  Reyes scored on a 30 yard field goal after the Panthers marched the ball down the field on 14 plays and 65 yards.

The pesky Golden Lions would not go away quietly as they scored on an eight-yard block punt and a two-point conversion to push the score to 27-17.  Defensively, the Panthers unit came up huge in the game’s crucial moments, stopping UAPB on three fourth-down attempts, all in the second half.  An interception by senior defensive lineman Troy James didn’t help either.  This would be all she wrote as the Panthers took the 27-17 victory and their third straight win of the season.

Next Up:
The Panthers will take 15 days off as they it has a bye week next weekend and will return to play against new SWAC opponent Bethune-Cookman on October 16 for a 3 p.m. CT kick from Daytona Beach, Fla.

“We are going to turn around these next couple of days get some rest and then come back and work on Prairie View,” Dooley said.  “Now we are going to do a self-scout on us and take a look at some of things that we have not been executing on, in all three phases of the game, especially when you talk about offense, special teams and defense.  So we will do a self-scout and see where we are and see some of the tendencies, and make some corrections so we can move forward and prepare for the rest of the season.”