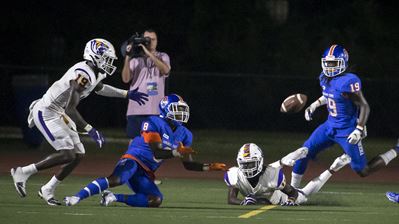 Benedict College came south 2-0 but Savannah State showed why it is regarded as the favorite in the SIAC East with a solid win at home on Saturday.

Savannah, Ga.—With its three-touchdown lead in the rear-view mirror Saturday night, Savannah State University turned to its “Old Heads” to make a couple of key plays.

Senior quarterback D’Vonn Gibbons scored on a 31-yard run with 1:25 left and transfer defensive back Le’Vonte Larrycame up with a big interception in the final minute as the Tigers survived to defeat Benedict College 41-34 before 3,743 fans at Theodore A. Wright Stadium.

“They (showed) some resilience because I’ll tell you what, the momentum was not in our favor,” SSU coach Shawn Quinnsaid.

The Tigers won their Southern Intercollegiate Athletic Conference (SIAC) opener and upped their record to 2-1.

But it wasn’t easy, although it started that way. SSU scored on six of its first seven possessions and built a 34-14 lead less than four minutes into the third quarter.

But the visitors stormed back with 21 straight points and tied the game with 4:12 left.That’s when Gibbons and Larry—who Quinn called the “Old Heads”—responded. Gibbons finished a six-play, 65-yard game-winning touchdown drive with a quarterback keeper.

“It was a counter play to the left side,” said Gibbons, who finished with 138 yards and two touchdowns on 20 carries. “My read told me to pull it. I saw green grass and I knew I was faster than everybody.”

Benedict (2-1, 0-1 SIAC) came right back and drove to the SSU 13-yard line with 19.7 seconds left when Larry stepped up in the save situation.
“I just felt like when we get on their neck, we have to stay on their neck,” said Larry, a transfer from Kennesaw State.

Running back D’Angelo Durham scored twice and DaMarion Colbert had a touchdown run as the Tigers averaged more than six yards a play while producing 361 offensive yards.

Kenneth Lockhart, who’s called “the Golden Boot” by his teammates had a golden night with two fields goals — including a personal-best 51-yarder — and five extra points. He also had four punts for a 48.5-yard average and put one kickoff in the endzone.