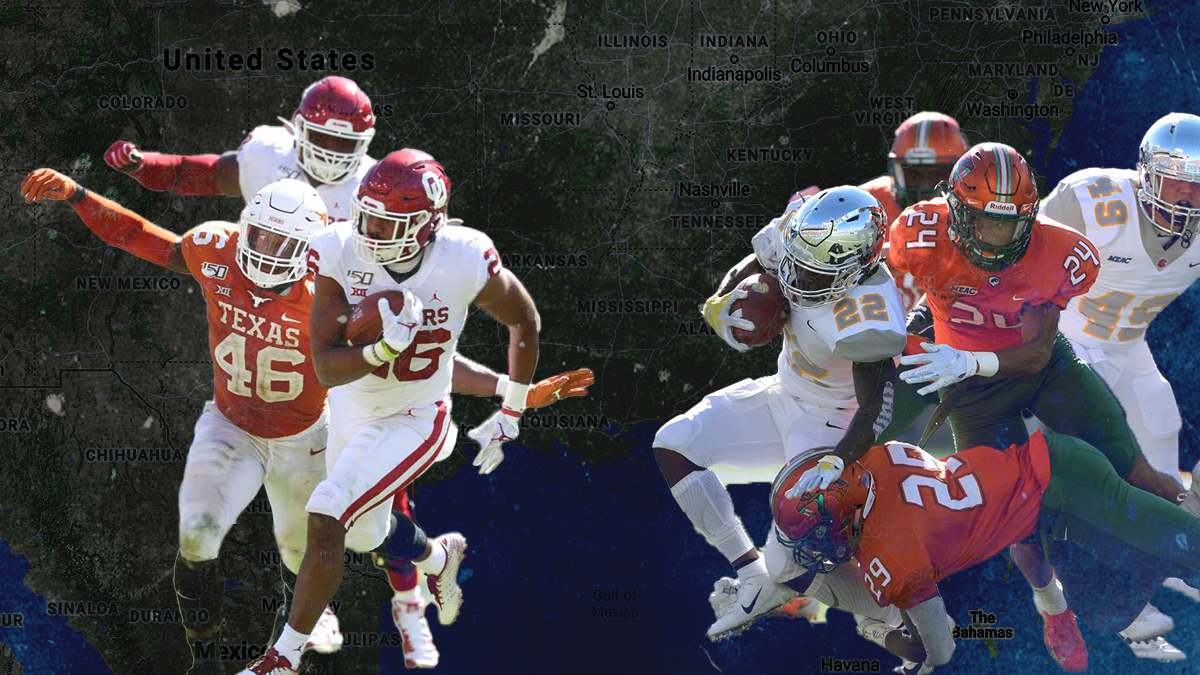 The HBCU parallel to Texas and Oklahoma’s SEC move

Texas and Oklahoma’s bold move to the SEC has shaken up the foundation of the Power Five. A similar move was made in 2020 in the HBCU football world.

To say the University of Texas and Oklahoma’s decision to leave the Big 12 to go to the SEC has shaken up college sports might be the understatement of the year.

The move of the two giants will be seismic, to say the least and could potentially lead to even bigger changes in the NCAA as a whole. The two schools won’t join the SEC for another four years at this time.

That said, the move does have some parallels to one in the world of HBCU sports. One that started last summer and is now official as we prepare to start the 2021-2022 academic year.

Both Florida A&M and Bethune-Cookman announced last summer that they were leaving the MEAC to join the SWAC, news first reported by HBCU Gameday. The switch was one that shook up both leagues, and HBCU sports as a whole.

Now clearly, the bottom line and attention of the OU/Texas move and the FAMU/BCU are on different levels entirely. However, there are some similarities between what happened in 2020 and what is taking place in 2021.

Football is king in the SEC and SWAC

All four universities are football schools in football states, and that’s not up for debate. Sure, Texas has had some really good basketball teams over the years, and Oklahoma has as well. But football is the driving force for both these flagship institutions of their respective states.

The same can be said about BCU and FAMU. FAMU, of course, is the only HBCU to win an NCAA football title, bringing home the 1978 Division I-AA title and being one of the winningest HBCU football programs of all-time. B-CU hasn’t had quite the same track record of success, but it has had moments of brilliance and dominance.

Both the Big XII and MEAC have multiple programs that — at the very least — aren’t as focused heavily on football as the cornerstone of their athletics programs. Two schools in the MEAC — Maryland-Eastern Shore and Coppin State — don’t even have football. The two Kansas schools in the Big XII have football, but they don’t add much to the league’s football strength. (Then again, we can’t act like Texas Southern — nevermind.)

The SWAC and SEC are unquestionably football-first conferences. Located in the Bible Belt where football is held right under or directly next to religion, the new blood fits right on in with the old guard. Both conferences have produced some of the most iconic coaches and players of all time.

Long-time fans of both conferences will tell you that they didn’t NEED new blood. They are both proud to often obsessive fan bases when it comes to their college football. And that’s why the newbies will fit in so well together. FAMU taking on Southern every year feels as right as Texas and Alabama or OU and LSU going at it on an annual basis. Whether they want to admit or not, the new schools definitely bring a lot to the table.

Which adds another parallel. Both Texas and OU helped form the Big XII in the 1990s after the Southwest Conference fell apart. Joining the SEC will reunite them with former SWC rival Arkansas as well as Texas A&M, which played in the SWC and then with the pair in the Big XII until 2012. FAMU and BCU were a part of the SIAC before jumping to the MEAC at the end of the 1970s. Alabama State and Alabama A&M also competed in the SIAC, and that block, along with Jackson State and Mississippi Valley now make up the SWAC East.

And while the bottom lines are massively different in terms of dollars and cents, both the SWAC’s new programs and the SEC’s coming attractions both made their moves with them in mind. The TV money was clearly the motivating factor for OU and Texas to jump to the SEC. For FAMU and Bethune-Cookman, it was taking their budgets to a conference where what they were spending in the MEAC could go further.

Perhaps most importantly, these athletics programs are taking themselves to leagues where they feel they will have a more natural fit. FAMU and BCU never quite fit into the MEAC organically from their induction into it. The MEAC was a league of Mid-Eastern HBCUs that wanted to have a Division I league. Florida A&M and BCU were southern HBCUs who wanted to be in Division I, and nearly ended up joining a merged MEAC and SWAC before deciding to go to the MEAC due to better public relations at the time. Texas and Oklahoma, along with Texas A&M and Baylor, decided to join the Big Eight in 1994 because the SEC and Big East were gobbling up TV contracts.

Matt Brown, the publisher of the Extra Points newsletter, made this observation.

Finally, both moves have put the conferences being left behind in desperation to make a move. Both the Big XII and MEAC have eight full-time members still committed to their conferences at the moment, but neither of them can feel safe. Both have to focus on not only adding conference members that make sense institutionally and athletically (and at least in the MEAC’s case, geographically) but they also have to keep remaining membership in their pockets while they do so.

And so there you have it. Four programs with strong football passion and history have left conferences joined out of convenience for ones that share the same level of passion for football and a few old rivals that can turn into consistent regional rivalries. They have also shaken up the foundations of their previous conferences and made college football fans wonder what could be coming next.

The HBCU parallel to Texas and Oklahoma’s SEC move