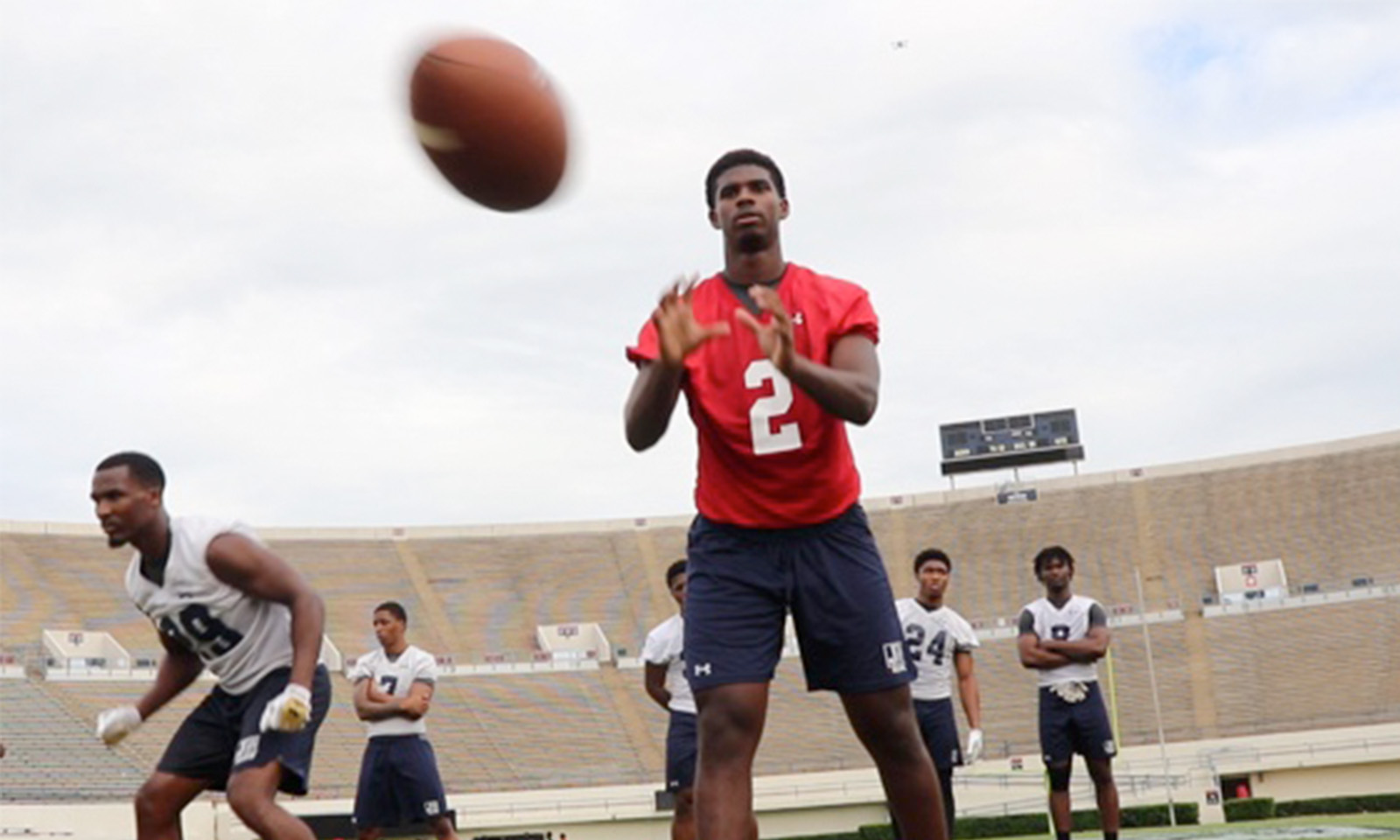 Jackson State OC Michael Pollock knows what a quarterback should look like, and he’s impressed by what he sees in Shedeur Sanders.

Jackson State assistant coach Michael Pollock knows what a quarterback should look like.

The offensive coordinator/quarterbacks coach has coached 10 Under Armour All-Americans and placed dozens of his student-athletes at Power Five programs throughout the country before coming to JSU.

And he’s impressed by what he sees in freshman quarterback Shedeur Sanders.

According to ESPN and 247Sports, at the time of his signing, the four-star recruit was the highest-rated high school signee in Jackson State history. He was number 60 on the ESPN300 board, the number 12 quarterback in the country, and eighth-best prospect in Texas. He finished his prep career with 47 wins, which is tied for 10th all-time at the prep level.

Sanders led Trinity Christian to the 2020 TCAL National Championship and held offers from over 25 Power Five programs. As a senior, Sanders finished 251-for-366 for 3702 yards and 43 passing touchdowns and completed 69 percent of his passes – finishing his prep career with 12,498 passing yards and 166 passing touchdowns.

Power in the Ranks

But now comes the work for the fall 2021 Season, and JSU will have a new quarterback at the helm. Even after the transfer portal removed some veteran quarterbacks Jalon Jones and Quincy Casey from the quarterback room, Pollock doesn’t see a drop-off in his ranks.

“Our room has changed a tremendous amount, and that’s because Shedeur Sanders is such a great leader,” he said. “The kids at every position, offense and defense, already respect him as the leader of this football team.”

Some would suggest that leadership role comes gift-wrapped, as Sheduer is the son of JSUU head coach Deion Sanders. But Pollock says otherwise.

“He’s earned that respect, not because of who he is, but by his actions this spring and summer, such as organizing workouts with receivers on his own,” he said. “There are many things that you don’t have to tell him to do. He does them because he’s that kind of guy.”

Pollock believes Shedeur Sanders can continue his prep success, like his 2020 TCAL National Championship, or when he led Trinity Christian-Cedar Hill to a 13-1 record and a third consecutive Division II state title in 2019 – a streak that started in 2018 when he took his team on a 14-0 record and Division II state championship.

Coach Pollock said he is stoked about the chemistry in the quarterback room at JSU.

“The two guys behind him have bought into their roles and are pushing him,” he said. “Of course they want playing time, but they’re going about it the right way. It’s been a really good quarterback room this summer, and I expect that to continue.”

Summer Preparations for a Prosperous Fall

When asked about how the work for the fall season is going, Pollock said he is excited about what he sees from the players.

“I feel like Santa Claus has come to Jackson in the summertime,” he said.

Pollock said the team is currently in Phase Two of its timeline.

“We are installing our offense and just learning our kids, especially the new guys,” he said. “This time has given us the opportunity to play with some things and look at different combinations and see how some kids mesh together.”

Pollock said he expects more progress as the summer moves on. Phase Three began this month.

“In terms of a mental standpoint, we are on cylinders,” he said. “Just trying to perfect it instead of teach it.”

Though the spring season did not end as hoped for, Pollock said he still sees it as a vital part of success.

“We are so far ahead of where we would be if we didn’t have the spring season,” he said. “If we just had 16 spring practices and ended with a game against ourselves, we wouldn’t be nearly as far along as we are. We got to learn our opponents and learn about ourselves.”

All work and effort are all about week one in Miami for the Orange Blossom Classic against FAMU.

“I grew up in South Georgia, so I know about FAMU, I know about Bragg Stadium,” Pollock said. “I’m excited to go down to Miami.”