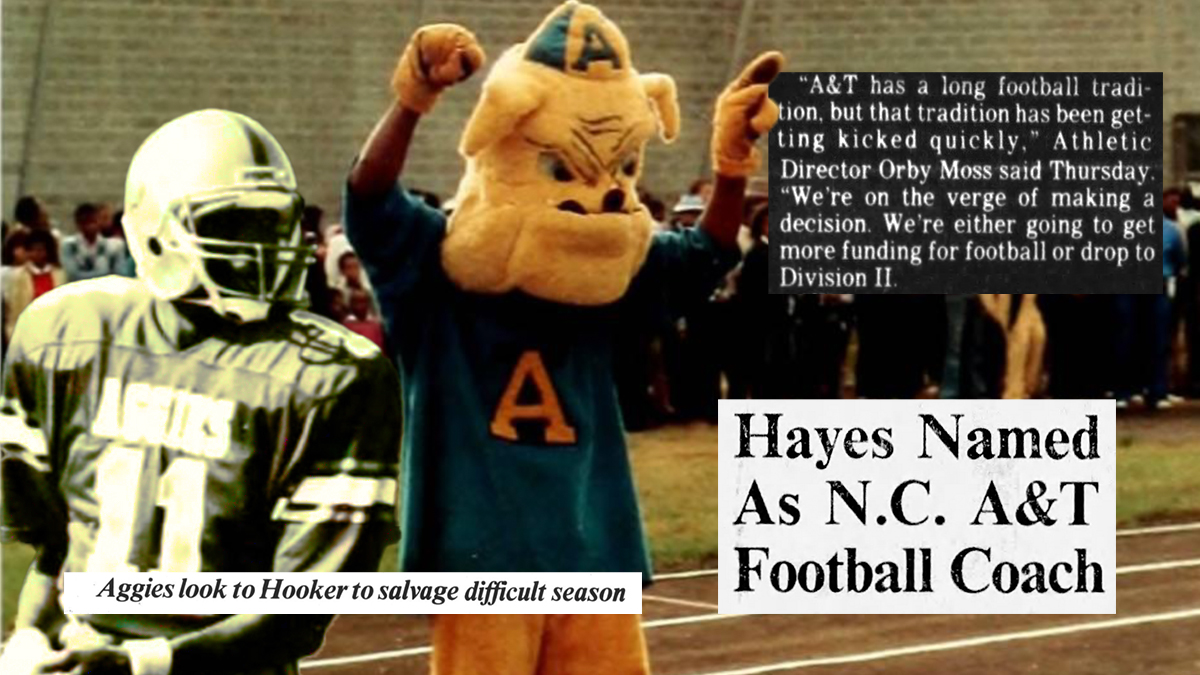 The History of NC A&T in MEAC Football: Part II

The 1980s was a turning point in the history of North Carolina A&T as the program tried to stay afloat in DI-AA.

The 1980s started off with promise for North Carolina A&T football. McKinley’s squad went 9-3 despite only playing three games in Greensboro as the new Aggie Stadium was under construction. The season concluded with a “Gold Bowl” win over rival NC Central and earned McKinley a new extension.

But a 3-8 season followed in 1981 and McKinley bolted for Prairie View A&M the following spring. He had been a candidate for several jobs during his stint at A&T, and on the way out, he questioned whether A&T was committed to remaining in Division I-AA or if it would drop to D2.

Like much of the country at the dawn of the age of Reagan, North Carolina A&T’s pockets were short. Bert Piggott, the former football coach, took over as AD in 1980 and things were bad.

“When I came in, no one knew exactly how big the deficit was, and no one seems to know now,” he said. “I’ve written the A&T fiscal affairs office several times asking for a declaration of just how big it is, but I’ve never gotten a reply.

So in June 1982, just after McKinley left, Piggott left too.

“When I became AD, I thought I could see some light at the end of the tunnel in five years, by 1985,” Piggott told The Raleigh News and Observer. “But after just three years, I’ve already seen too much.”

Before Piggott left, he brought in Mo Forte to take over the football program. The 35 year old had previously been an assistant at Duke University. Things were rough early on, as A&T continued to deal with the financial replications of being a Division I school. Forte’s first three seasons resulted in a 9-21-1 record as its status as a Division I level school  remained in doubt.

“A&T has a long football tradition, but that tradition has been getting kicked quickly,” A&T AD Orby Moss told the Wilmington News-Journal in late 1984. “We’re on the verge of making a decision. We’re either going to get more funding for football or drop to Division II.”

“We’re done of 20 schools playing football in North Carolina. There is no state funding for our athletes. We’re allowed only 43 in-state scholarships. If we take a young man from out of state, that counts as two.”

Despite those hardships, Forte’s program began to take shape. Quarterback Alan Hooker came in from East Randolph High School and took the reigns of the offense as a freshman in 1984 and led the team to a 6-5 record in 1985. Forte knew he had something going.

“It doesn’t matter what classification he is, Alann Hooker is a leader,” Forte told the Black College Sports Review a few games into his freshman season.

But the jewel of the Forte Era would come in 1986. With Hooker running the pro-style offense and Demetrius Harrison patrolling on defense, the Aggies put up a 9-3 record to bring home their first-ever MEAC title.

The good times wouldn’t last long, though. A&T fell back to the pack in 1987, finishing the season 3-7. Hooker, whose sons are college football quarterbacks now, left the MEAC as its all-time leading passer. The following spring, Forte left A&T for a job with the Denver Broncos. A&T needed a new coach and fast.

Bill Hayes to the rescue

It turns out, it didn’t have to look far. Just over half an hour down the road, Bill Hayes had turned Winston-Salem State in a football power and pro factory. The 40-year-old had led WSSU three CIAA titles in 11 years at the helm, as well as several wins over the more-established A&T program. In late April 1988 he accepted the job, bringing with him his famous Wing-T offense and a young quarterback named Connell Maynor.

Hayes told the Winston-Salem Chronicle he left WSSU for A&T because he felt the NCAA’s Proposition 48 rules favored larger schools.

“With the rules we have to play by these days I don’t think Jesus could get really good athletes to Winston-Salem State or any other division II school. I don’t think I could do it with the new rules so why should we expect Pete Richardson to do it? Yes, Pete is going to have a hell of a time recruiting. We all are. Everything changed and it favors the big guys.”

While Hayes had a philosophy and a winning track record, it wasn’t a quick turnaround. A&T opened the season with back-to-back losses to rivals and CIAA schools North Carolina Central and WSSU. The program finished 2-9 in his first season.

“We’re not a very talented team,” Hayes told the News Journal late in the season. “We’ve got between 30 and 40 players who can really play for us, so we have a lot of recruiting to do to try and get the program back to where it needs to be.”

The 1989 season would show signs of coming along as A&T improved to 5-6 to close out the decade. Slowly, but surely, Hayes was building a contender in Greensboro.

Best Offensive Player: Alan Hooker — The quarterback finished his career with the most completions (593), attempts (1,073) touchdowns (59) and yards (6,994), with those records standing for over 30 years before Lamar Raynard finally beat them out.

The History of NC A&T in MEAC Football: Part II