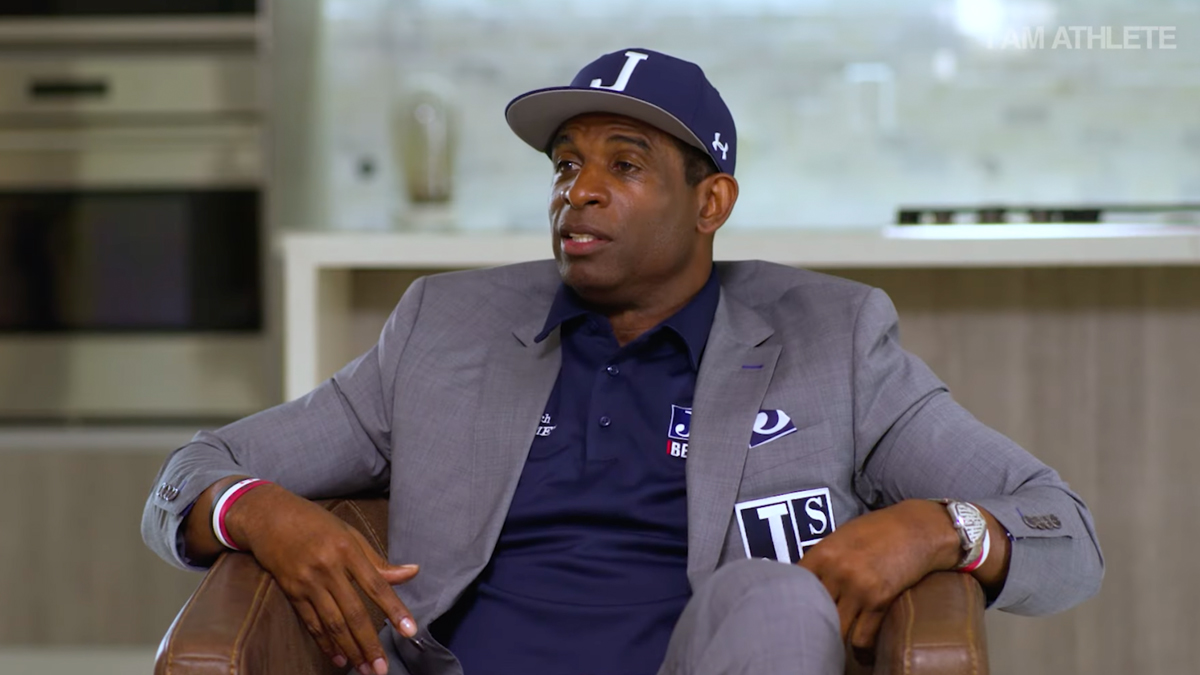 Deion Sanders chopped it up with Brandon Marshall, Fred Taylor and Channing Crowder about closing the talent and resource gap.

Deion Sanders made his appearance on I AM ATHLETE on Monday, speaking on the recruitment of Sheduer Sanders and much more.

Former Jacksonville Jaguar Fred Taylor asked Sanders about getting his sons to follow him to Jackson State. Sanders re-hashed the conversation he had with Sheduer.

“We didn’t talk about it. It was an elephant in the room. Because I don’t want to recruit my own son. Why do I have to recruit my own son. That seems dirty to me. Slick — to me. So finally he came up and said “Dad we just gonna walk up here like it ain’t what it is.” I said when you’re ready to talk, lets go. He said ‘well you know I’m coming but, you know, I’m gonna need a little something.”

It wasn’t a one-way ticket until we made it that way. Florida wasn’t birthing people left and right, until them cats started rolling through there like that. They made the way. Florida State — we wasn’t a program like it is — until Prime got there. The UM wasn’t like that Mel B. And all them got there. It took a group of us to provoke change. Why can’t we provoke change for us?

The Jackson State head coach then mentioned the impending NIL legislation that he thinks will give him a leg up in recruiting.

Sanders then went on to talk about how he wanted 50 spots at the NFL Combine for HBCU players. Channing Crowder pushed back by stating that players at HBCUs can’t compete with Power Five players. Sanders countered with the position that while the team as a whole isn’t as talented, individual players can shine no matter where they go. He also floated the idea that some players benefited from being on teams with great talent while other more talented players often play on teams viewed as lesser.

“The whole entire team is not like that. Its’ not on that level of an Alabama. But if you take that Alabama kid and now you put him here — away from his teammate — who is he?” You take Mac Jones. Take him off the team and put him with somebody else and see who he is? He is on a team with — every durn lineman, every receiver — everybody. So you mean to tell me every quarterback Alabama gets is “like that?” No, they ain’t like that, because what has happened perpetually in the NFL?

Ask any NFL fan the answer to that. Sanders made a similar observation about Ohio State quarterbacks as well. His point was that, talent doesn’t have to be restricted to just those schools.

“One for one, we’re not there. But I guarantee you, I got a couple corners right now — in a year or two they will be drafted high.”

“I’m with you, I’ve got nephews coming up — four stars, five stars bruh — I’m sending them to you. Take care of them.”

Sanders promised that he would send them back as men.

“Send them back men,” Marshall said. “But I need them in the league too.”