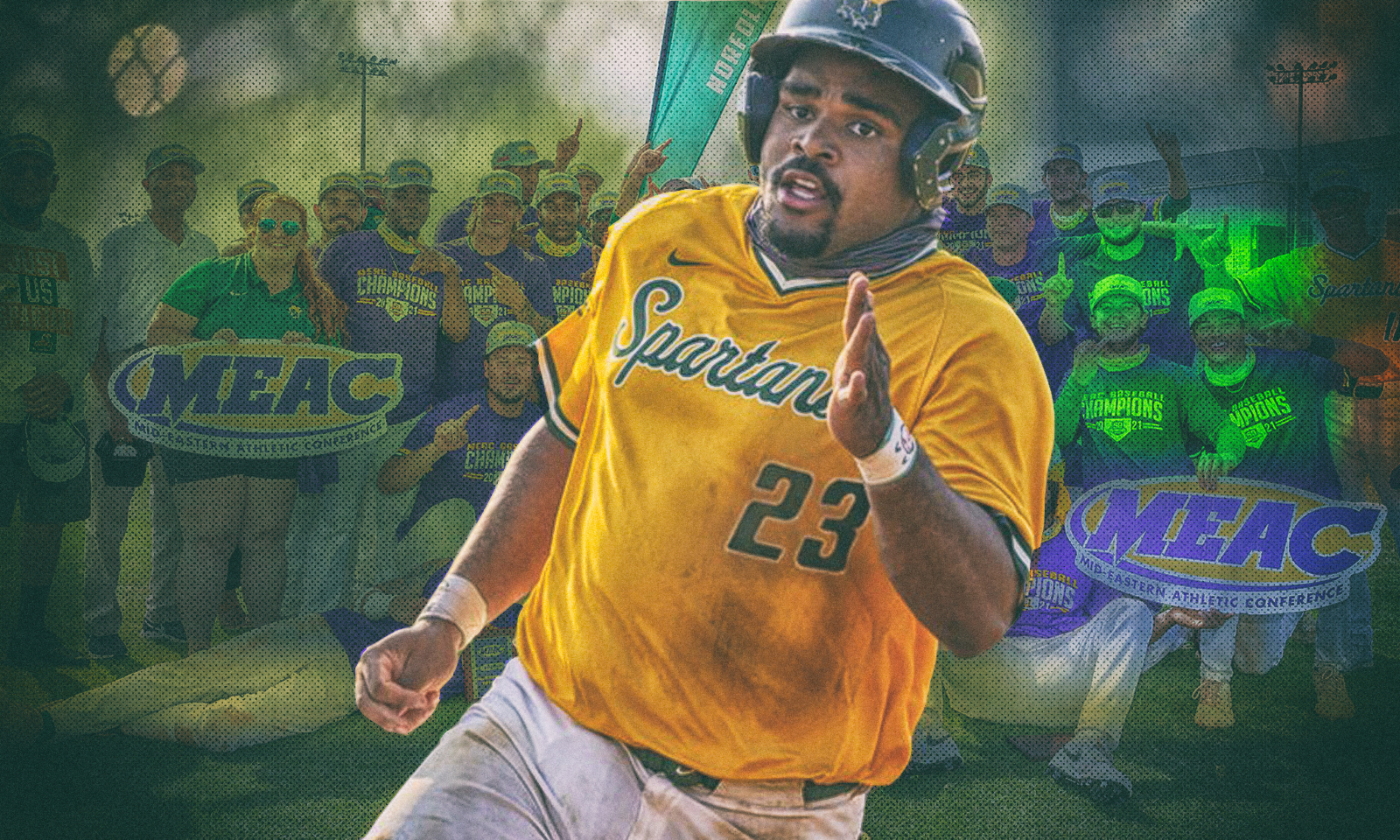 “Our team has shown resiliency all year long. We were dead in the water a bunch of times, but they just keep fighting” NSU head coach Keith Shumate.

The Spartans (25-26) rallied to force extra innings, then came back from a two-run deficit in the 10th to force an 11th frame. Star second baseman Alsander Womack provided the final heroic act in a game that had plenty of them, hitting a walk-off RBI single in the bottom of the 11th to lift NSU to a 7-6 win over North Carolina Central on Saturday in the MEAC Championship at Marty L. Miller Field. The victory gives Norfolk State baseball their first-ever MEAC baseball championship in their 10th championship round appearance.

“Our team has shown resiliency all year long. We were dead in the water a bunch of times, but they just keep fighting,” said NSU head coach Keith Shumate.

That they did. The Eagles (27-20), who advanced out of the loser’s bracket and had to beat NSU twice Saturday to take the title, started quickly with two runs in the first inning on singles by Luis DeLeon and Jacob Raby. The Spartans got one back in the first on an RBI double by Ty Hanchey, the first of his four hits in the game.

The Eagles scored two more in the third on a Cameron Norgren RBI double and Kobe Phillips’ RBI single, making the score 4-1 in NCCU’s favor.

Khie Simms’ fielder’s choice in the bottom of the third brought Norfolk State baseball within 4-2, but the two bullpens settled in from there. Neither team scored in the next four frames, as the Eagles got effective relief from Brenton Fisher and Sam Murchison and NSU likewise from graduate student Alex Wright. Wright lasted a season-high 6.1 innings out of the bullpen, giving the Spartans a chance to rally. Dionte Brown’s two-out RBI single in the eighth started the comeback, scoring Adam Collins to cut the deficit to one run.

In the ninth, Danny Hosley and Hanchey hit two straight singles to start the inning. Jacob Council’s RBI groundout plated Hosley with the tying run. NSU nearly won it in the ninth, but Simms was just beat to the bag on a ground ball for the third out with the winning run at third.

The Eagles seized momentum back in the top of the 10th. Norgren hit a two-run home run to give the Eagles a 6-4 lead, but NSU again had the answer. Collins reached on a throwing error to start the 10th and scored on a two-out RBI single by Womack. Womack stole second and scored on Hanchey’s RBI single to extend the game again.

NSU righty Michael Portela worked a scoreless top of the 11th to set the stage for the Spartans’ winning rally. NCCU reliever Caleb McRoy stuck out the first two hitters of the frame, but walked Collins and pinch hitter Cody Donnell. New NCCU pitcher Gavyn Byrd hit Minjae Hong to load the bases, and the Eagles went to MEAC Pitcher of the Year Ryan Miller to face Womack with the bases loaded. Womack lined a 1-1 fastball into right center to plate Collins and set off a wild celebration in the infield.

Womack, who was named tournament MVP, finished 3-for-6 with two runs and two RBIs. Hanchey went 4-for-5 with two RBIs, tying his career high that he set in the opening game of the tournament against Florida A&M. Collins scored three runs.

Womack, Hanchey, Hosley and James Deloatch were all named to the all-tournament team, and Shumate was named the tournament’s Most Outstanding Coach. Shumate, who won the 2005 MEAC championship leading North Carolina A&T, is believed to be the first coach in conference history to win the league baseball title with two different schools. NSU is the first school from the MEAC North to win the conference title since Howard in 1998.

Portela earned the win with 1.2 innings of scoreless relief, improving to 3-3 on the year. Wright didn’t factor into the decision but struck out eight batters in 6.1 innings, allowing just five hits and two runs with one walk.

Norgren had three hits and three RBIs for the Eagles. Phillips, DeLeon and Figueiredo had two hits apiece.

The win culminated a redemption story of sorts for NSU, which advanced through the winner’s bracket to the championship round of the 2019 tournament only to lose twice to Florida A&M, once in a ninth-inning comeback. This time for NSU, the story had a happy ending.

“We didn’t talk about (2019) at all, but our experience showed today,” Shumate said. “We overcame adversity all year. I just told our guys, just focused on the next pitch and getting a little better every day and we’d be in this position.”

The Spartans will now make their first-ever NCAA Division I Baseball Championship appearance the weekend of June 4. They will learn their regional destination during the NCAA Selection Show, which will be broadcast at noon on Monday, May 31 on ESPN2.