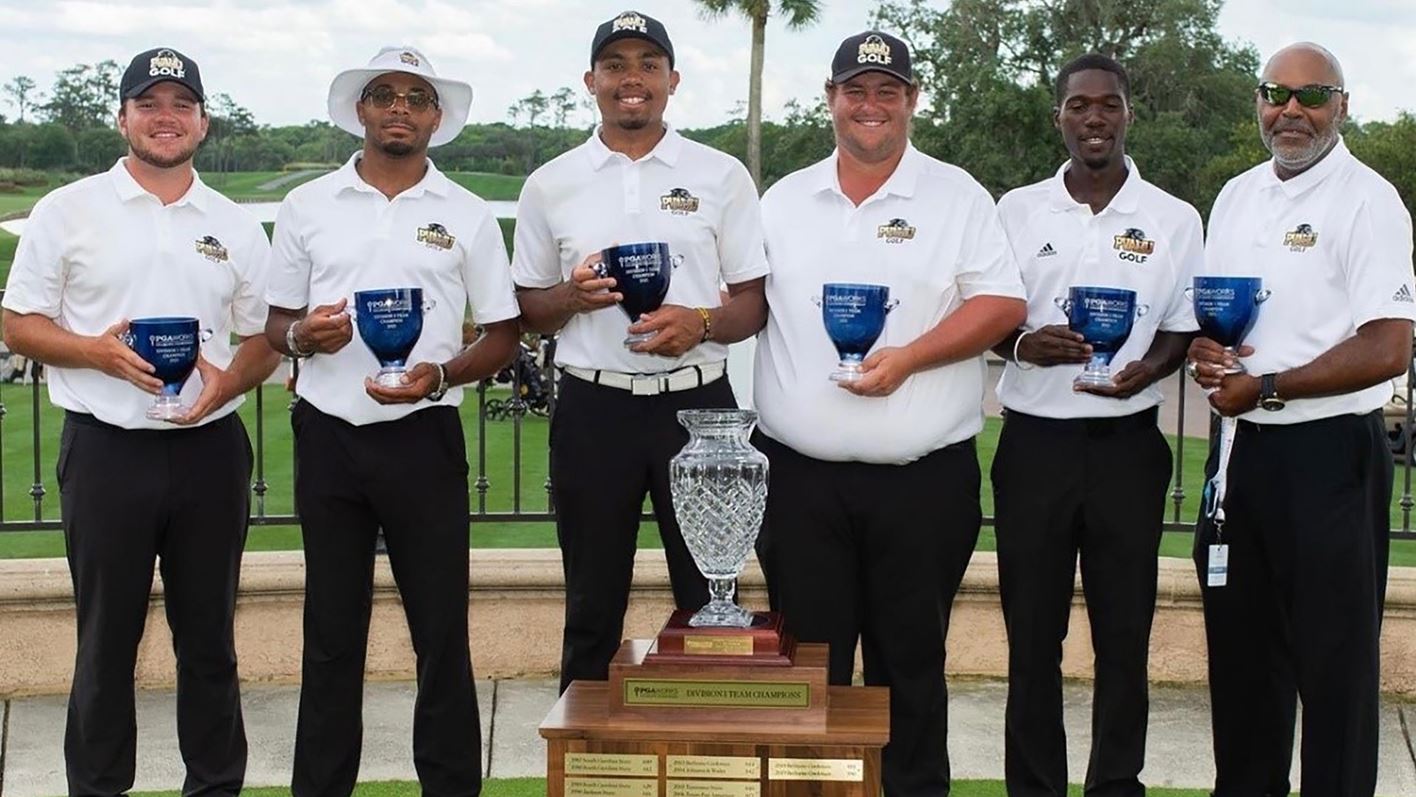 The dramatic 17th hole provided all of the action.

Prairie View A&M fell behind the Howard for the first two days of the PGA Works Collegiate Championship at TPC Sawgrass in Ponte Vedra Beach on Monday and Tuesday, but roared back in a dominating performance on Wednesday’s final day to bring home the men’s Division I HBCU National  Championship.

Playing two days on the Stadium Course (Monday/Wednesday) and one Tuesday on the Valley Course, the Panthers, fresh off their 2021 SWAC  championship played steady down the wire to take home the top prize.

PVAMU head coach Kevin Jennings, the HBCU Golf Coach of the Year,  led his team to the title. But he was just happy to get back to coaching golf.

“It was wonderful to get some competition in and allows the guys and girls to get out and compete in such a wonderful venue, such great competition and allow them to achieve what they achieved,” said Jennings.

The weather, which was benign during most of both practice rounds, turned to the evil element on Wednesday.  With the wind gusting at 15-20 MPH, drives, approach shots, and even putts were affected by the swirling nature of the gusts.

With the gusty winds swirling in the bowl that makes up the arena of the famous island green at TPC Sawgrass, the most famous hole on the PGA Tour and possibly all of golf, several players found themselves switching clubs, second-guessing the distance and what it took to make it safely on the green.

The drama on the 17th hole threatened to change the entire dynamics of the tournament.  PVAMU lost several strokes on the hole allowing ASU to close the gap.

In the end, the final two Panthers safely navigated the hole on their first try, cutting the faltering down the stretch.

Prairie View A&M moves on to NCAA postseason play next. It will begin as the No. 14 seed in the Albuquerque regional at the Championship Course at UNM, hosted by the University of New Mexico.

Fun fact: The TPC Sawgrass was famously designed by Pete Dye, an innovative course architect.  While Dye is credited with the  beautiful and challenging layout of the TPC Sawgrass Stadium Course, his  wife should also get some credit.  As Pete was laying out the course, Alice  said “Why don’t you just make an island green.”  The result is the most famous hole in golf.