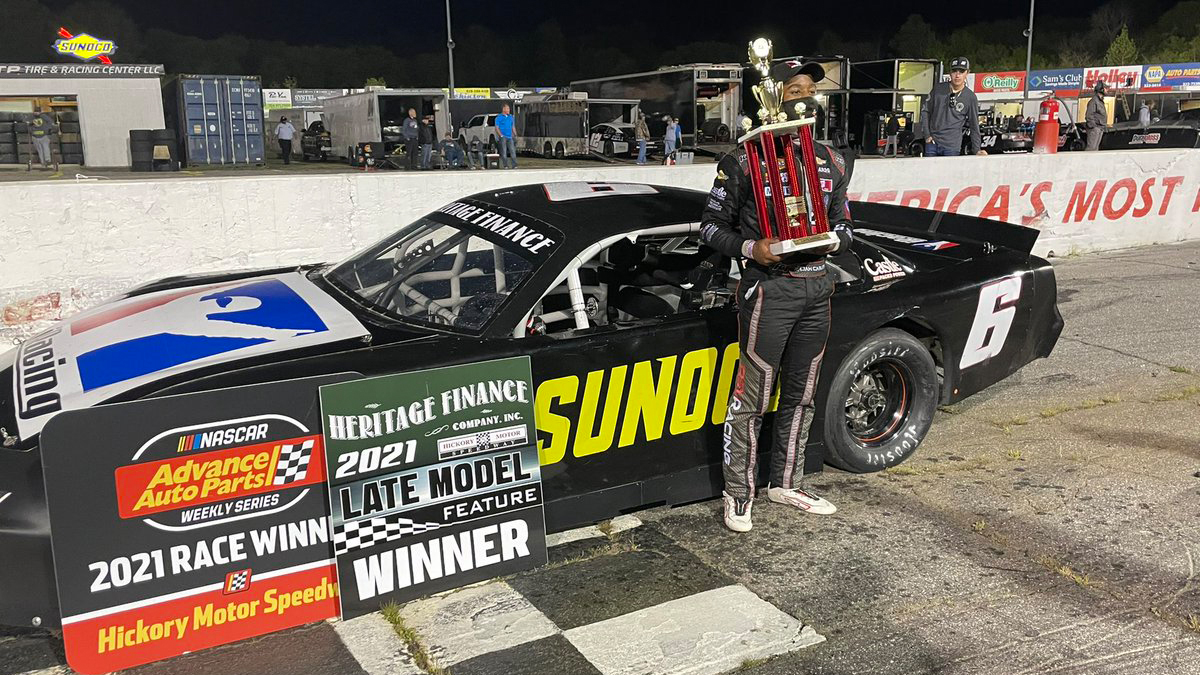 Rajah Caruth, an 18-year-old from Washington, D.C., is looking to continue the tradition of stars who have used success at the Hickory Motor Speedway venue as a launching pad up the NASCAR ladder. He got a fast start Saturday night as the NASCAR Drive for Diversity development program driver put the No. 6 Sunoco Chevrolet for Rev Racing in Victory Lane.

Caruth started fifth and took advantage of a mechanical issue with teammate Isabella Robusto under a late caution to earn a trip to Victory Lane. After starting eighth in the second feature, he completed the sweep.

“It’s pretty awesome,” Caruth said. “The first one, we were kind of right place at the right time. The second one, I feel like we out drove them. It was pretty fun.”

“There was definitely a little bit of confidence there,” Caruth said. “We started next to Gracie (on the final restart with 25 laps to go). We went into Turn 1, and I don’t think I’ve ever drove it deeper into one. And it stuck. That’s a testament to this team. They’re the best.”

According to Hickory, it’s the first time the track had two women finish in the top three in its Late Model Stock Car division.

Rajah Caruth comes from an iRacing background. A NASCAR fan growing up, he first earned attention through the eNASCAR Ignite Series – a grassroots youth racing platform that identifies drivers without access to traditional race tracks around the world.

Caruth is one of 10 drivers in the iRacing Pro Invitational Series Fan Vote to round out the field in next week’s virtual race at Talladega Superspeedway.

After earning a spot in the NASCAR Drive for Diversity Youth Driver Development Program in 2019 — the first driver from a majority iRacing background to be picked for the program — he drove in the NASCAR Advance Auto Parts Weekly Series last year. Caruth won his first career Late Model race last October at another historic NASCAR track: South Carolina’s Greenville-Pickens Speedway.

“Growing up, I was really a student of the sport and a fan,” Caruth said. “To put my name in the books, not only winning at Greenville, but twice here, it means a lot.

“It means the world.”

This season, Caruth is driving in both the NASCAR Advance Auto Parts Weekly Series and the ARCA Menards Series. He finished fourth in the most recent ARCA Menards Series East race at 5 Flags Speedway in Pensacola, Florida, in February.