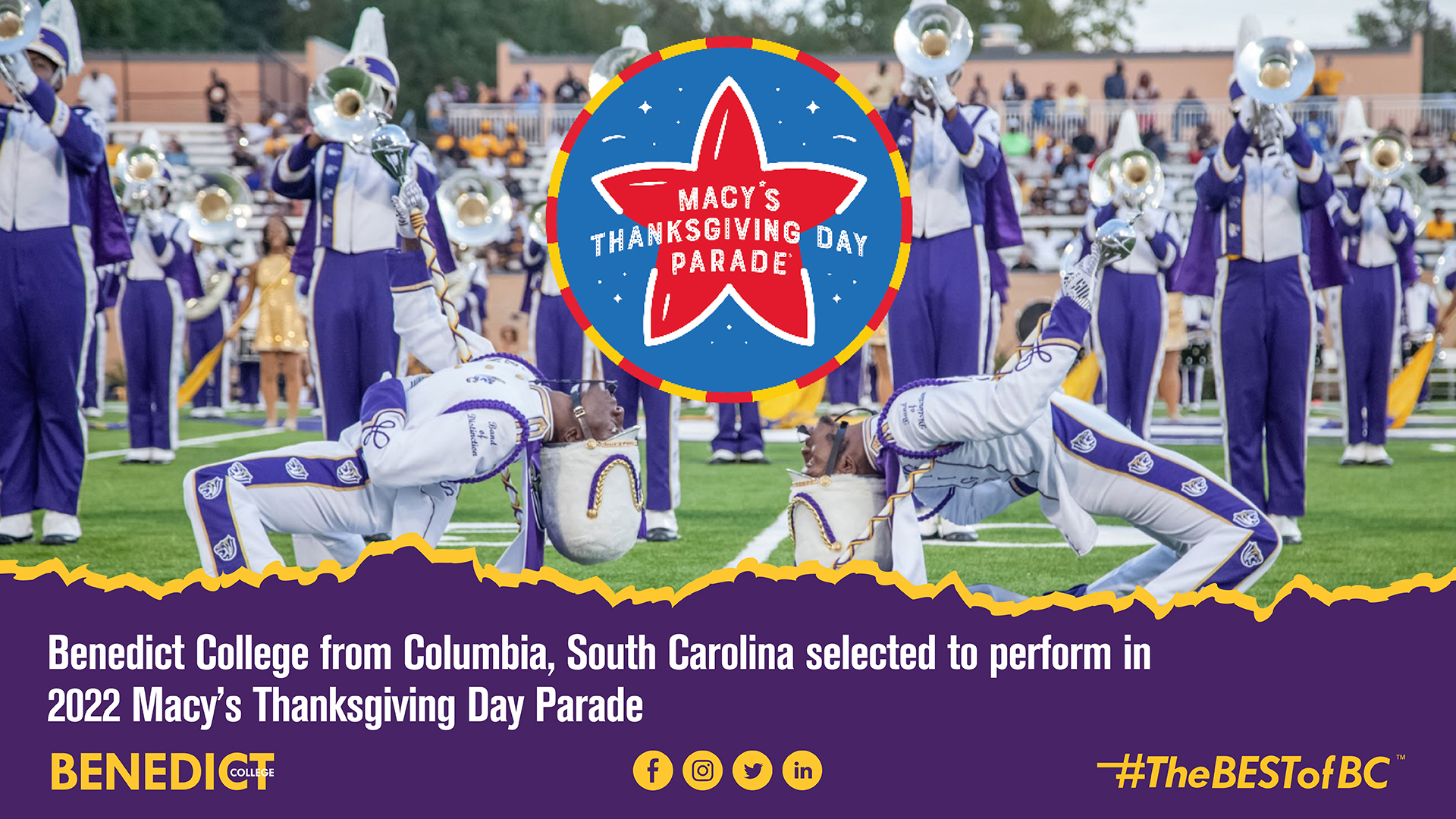 The band’s appearance in the 2022 Parade will be its first ever.

NEW YORK, NY & COLUMBIA, SC – April 15, 2021– Today, Benedict College Marching Tiger Band of Distinction, was selected to perform in the 2022 Macy’s Thanksgiving Day Parade®, representing the state of South Carolina. This will mark the first Parade appearance by the band. The Benedict College Marching Tiger Band of Distinction will join the celebration at the call of “Let’s Have a Parade™,” the iconic phrase that has signaled the start of the beloved annual holiday tradition since 1924.

Each year, the Macy’s Parade Band Committee looks for bands that have the stage presence and musical expertise to captivate the streets of New York City and millions of viewers across the country. Benedict College Marching Tiger Band of Distinction was selected from more than 100 applicants as one of nine selected bands to march in the 96th edition of the annual holiday spectacle. The band will join the revelry along with other iconic Macy’s staples: floats, giant character balloons, clowns and superstar performers galore, helping to create an unforgettable experience for millions.

“Energetic, exciting and entertaining – these words perfectly describe the Benedict College Marching Tiger Band of Distinction and the incredible sound and spirit they deliver at every single performance,” said Wesley Whatley, creative producer, Macy’s Thanksgiving Day Parade. “Macy’s is so proud to introduce this incredible group to our Parade audience on Thanksgiving morning for their big debut!”

“The Macy’s Thanksgiving Day Parade is a quintessential holiday tradition,” said Dr. Roslyn Clark Artis, President and CEO of Benedict College. “I can think of no better way to showcase the showmanship, talent and precision of the Benedict College Tiger Band of Distinction than to watch them march down the streets of New York City on Thanksgiving Day!”

Benedict College Marching Tiger Band of Distinction will spend the next 18 months planning for their Parade appearance. Rehearsals and creative fundraising events will not only bring the school and local community closer together but also prepare the students for the march of a lifetime. To help kick-start the band’s fundraising goal, Macy’s has made a $10,000 donation in support of their march towards the Big Apple.

For more than ninety years, Macy’s Thanksgiving Day Parade has given thanks to what Macy’s values most –- its loyal fans. More than 5,000 Macy’s employees and dedicated volunteers work tirelessly to create a spectacular event that entertains the cheerful crowds and provides joy to millions at home watching on Thanksgiving Day. Stretching down a more than two-mile-long route in New York City, the spectacle is alive with gleaming color, music and smiles.

About the Macy’s Thanksgiving Day Parade:

For more than 90 years, the Macy’s Thanksgiving Day Parade has marked the official start of the holiday season. With more than 50 million viewers nationwide on television and online, the Macy’s Thanksgiving Day Parade is a national icon that has grown into a world-famous holiday event. Featuring Macy’s signature giant character balloons, fantasy floats, marching bands, clowns, celebrity and large group performances, and the one-and-only Santa Claus, the annual spectacle continues to bring families together to create cherished holiday memories. For more information on the Macy’s Parade please visit www.macys.com/parade. (NYSE: M)

Founded in 1870 by a woman, Bathsheba A. Benedict, Benedict College is a private co-educational liberal arts institution, offering 25 competitive baccalaureate degree programs. The Midlands HBCU welcomes students from all 46 counties in South Carolina, 30 states across America, and 26 countries around the world.

Over the past ten years, three out of five Benedict College graduates have attended professional or graduate schools. There are over 18,000 proud Benedict Tigers throughout the nation. Benedict College has been a community leader for over 150-years and is a significant contributor to South Carolina and the region. Contributing $130 million and 1,218 jobs in total local and annual economic impact, a Benedict graduate working full-time throughout his or her working life can expect to earn $1.1 million in additional income because of their Benedict College degree.

The College made front-page news in the spring of 2018 when it became the first South Carolina college to lower its tuition by 26 percent. Cutting tuition drew praise from the Commission on Higher Education, South Carolina’s education oversight body. The commissioner noted that the move Benedict College made should be applauded because it offers families affordability and students greater access to higher education.

Benedict College has been highly regarded and exceptionally ranked for its programs by several academic and traditional publications.  For example, Benedict College was ranked as one of the top baccalaureate colleges in the nation by Washington Monthly magazine for creating social mobility and producing cutting-edge scholarship and research.  In 2019, Benedict College received the 2019 ACE/ Fidelity Investments Awards for Institutional Transformation and was named the HBCU of the Year by HBCU Digest.