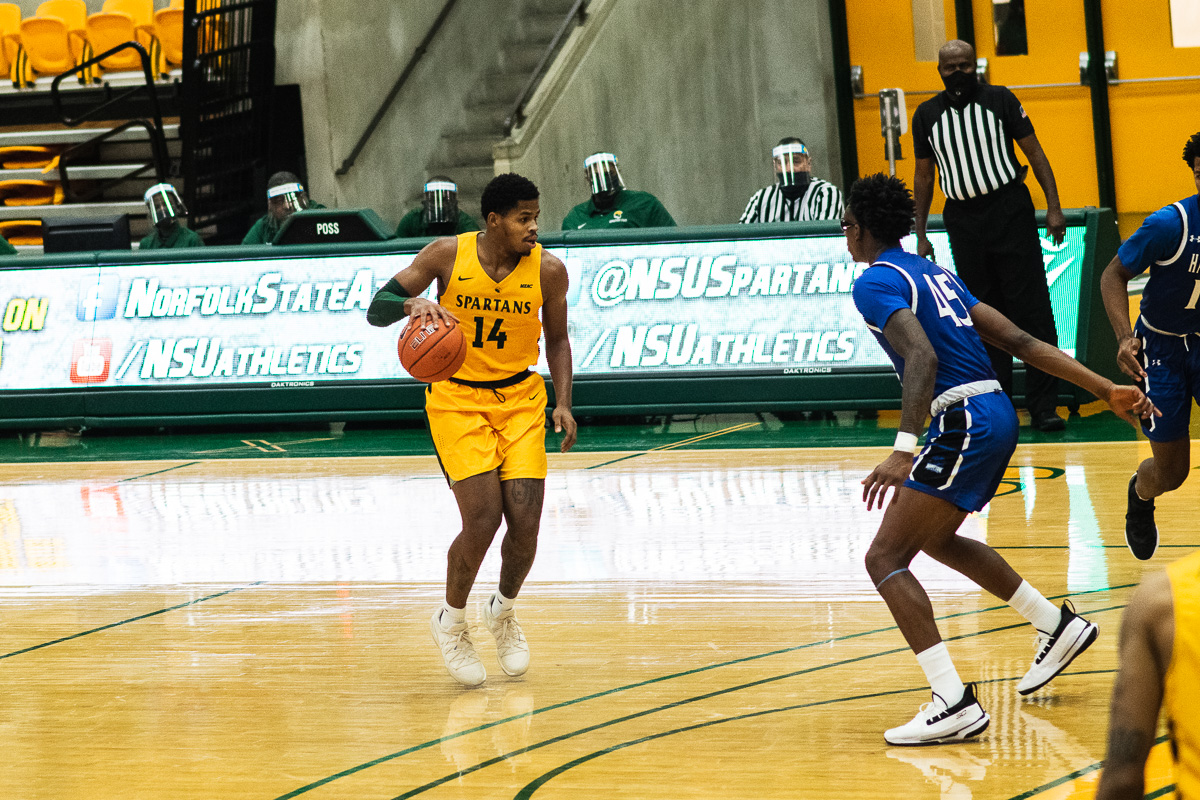 A near triple-double by Devante Carter helped Norfolk State pick up the win in the latest installment of the Battle of the Bay rivalry.

Norfolk State pulled away from Hampton late in the second half and came away with a 76-64 win over its neighbors to the north.

NSU’s Devante Carter nearly messed around and got a triple-double, scoring a game-high 29 points and adding nine rebounds and eight assists in the win. He scored 14 of his points in the last 8:56. Hampton scored just eight points as a team during that stretch.

“He had to shoulder more of the scoring load than he has to in the future,” Norfolk State coach Robert Jones told the media after the game. “We lost our starting point guard in the shoot around. That was unexpected. A freak ankle-injury and we lost him before the game.”

The first half was a back-and-forth battle of runs. Neither team managed to go up by more than six during the first 20 minutes, and NSU held a 38-37 lead at the half.

Norfolk State shot better than 55 percent from the field, while Hampton was limited to just 35 percent.

Leading the way for Hampton was big man Edward Oliver-Wright. He scored a team-high 21 points on 8-for-17 shooting. Chris Shelton added 16 points for HU and Davion Warren finished 10 points as well.

Norfolk State has won two out of three vs. Hampton

The win over Hampton was the second time in the last three years that NSU beat its longest-running rival. The game, which was a home-and-home series for over 50 years in both the CIAA and the MEAC, is now a one-night show a year. The home team has won in each of the three games.

There were fans in attendance at Joseph Echols Memorial Hall on Monday night. But due to the pandemic, only 250 were allowed in the game. Jones admitted it did make a difference in the pre-game hype, if not the game itself.

“To have the Battle of the bay with 200 people in the gym was weird. A lot of times its a lot of hype for the Battle of the Bay, this one kind of flew under the radar. Hampton is a quality opponent, I think they’re going to get some quality wins going down the stretch.”

Norfolk State improves to 3-1 on the season. Hampton falls to 1-1 overall.