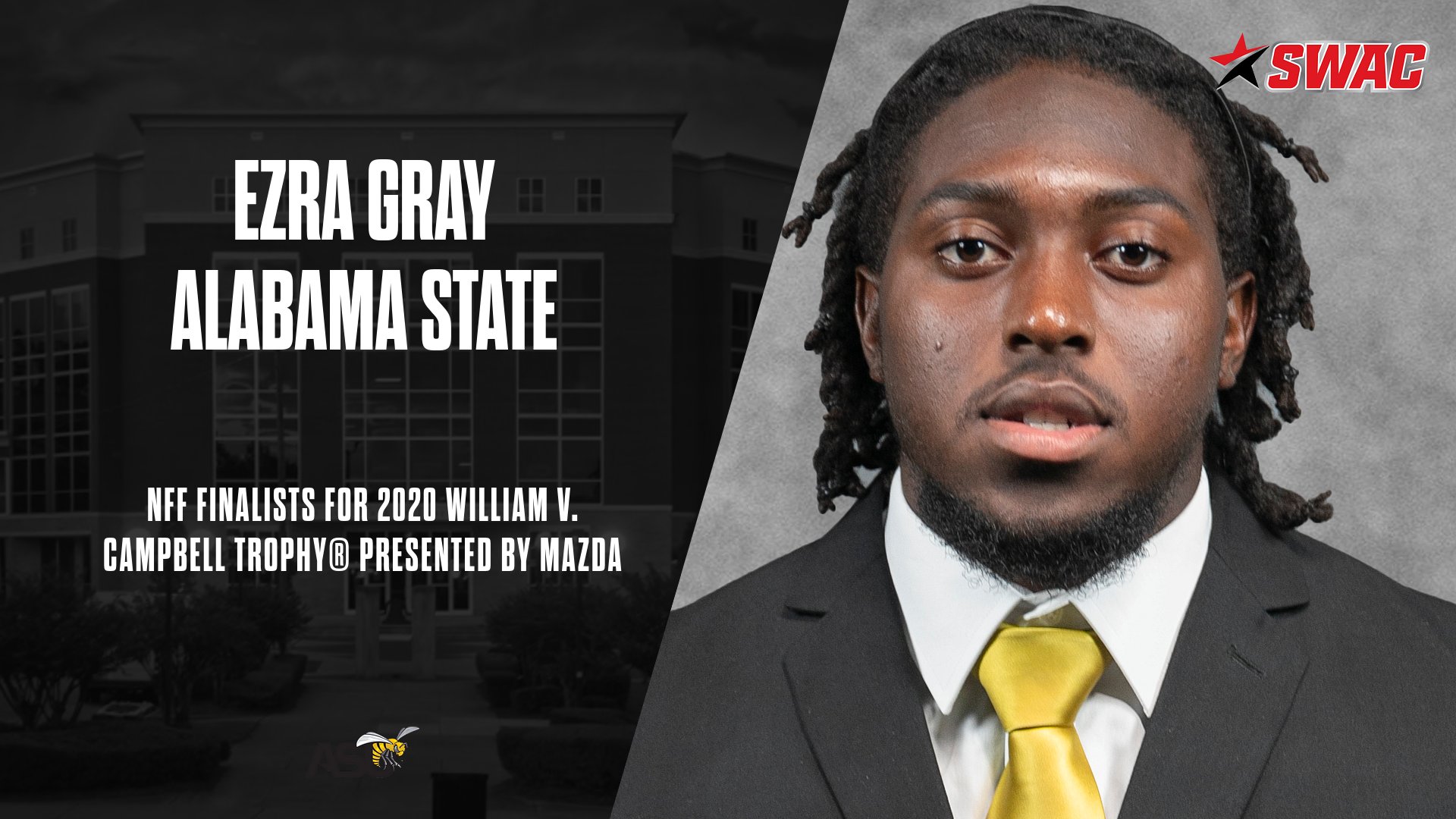 The ASU team captain receives a postgraduate scholarship for being a finalist.

IRVING, Texas | The National Football Foundation (NFF) and College Hall of Fame announced the finalists for the 2020 William V. Campbell Trophy Presented by Mazda, Thursday, and Alabama State’s Ezra Gray was chosen as one of those finalists.

The Campbell Trophy is college football’s premier scholar-athlete award that annually recognizes an individual as the absolute best in the nation for his combined academic success, football performance and exemplary leadership. The 12 finalists were picked from a group of 199 semifinalists.

Gray has played in 31 games and was a team captain during the 2019 season, while rushing for 1,372 yards on 341 carries during his career. He has also added 37 receptions for 246 yards, while returning 44 kicks for an average of 23.93 yards per return. During his career, Gray has been named preseason all-conference twice and earned all-conference honors as a kick returner two times.

This past season, the senior earned CoSIDA Academic All-America honors and was named the FCS ADA Scholar-Athlete of the Year. He was named First Team CoSIDA Academic All-District, FCS ADA All-Academic, and the Coca-Cola Scholar-Athlete of the Year at the Magic City Classic. Gray also earned his undergraduate degree from Alabama State, and has started pursuing a postgraduate degree.

He becomes the second player in Alabama State history to be named a National Scholar-Athlete, joining former All-American Eddie Robinson who was chosen in 1991.

Submitted by their schools, which are limited to one nominee each, candidates for the Campbell Trophy® Presented by Mazda must be a senior or graduate student in their final year of playing eligibility, have a GPA of at least 3.2 on a 4.0 scale, have outstanding football ability as a first team player or significant contributor and have demonstrated strong leadership and citizenship.

Launched in 1959, the NFF National Scholar-Athlete Awards Presented by Fidelity Investments celebrate their 62nd year in 2020. The awards were the first initiative in history to grant postgraduate scholarships based on both a player’s academic and athletic accomplishments.

Including the 2020 William V. Campbell Trophy® finalists, the NFF has honored 878 individuals with National Scholar-Athlete Awards, and this year’s postgraduate scholarships will push the program’s all-time distribution to more than $11.9 million. The honors have used the financial support to earn more than 150 medical degrees, 100 law degrees, 80 MBAs and 43 PhDs. Continuing their excellence on the field, more than 200 recipients have played in the NFL with an average career of six seasons or double the length of a typical NFL player. Past recipients also include 13 Rhodes Scholars and six Heisman Trophy winners.

Named in honor of Bill Campbell, the trophy has been prominently displayed inside its official home at the New York Athletic Club since 2013.