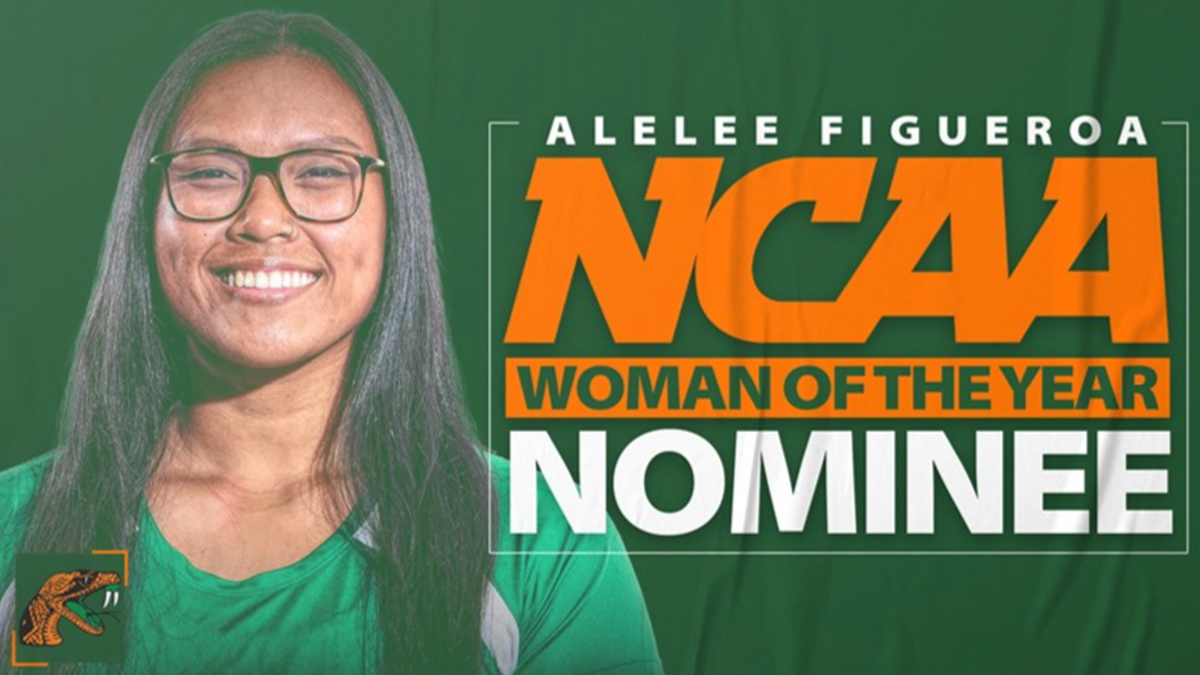 Alelee Figueroa of FAMU Woman of the Year nominee

Alelee Figueroa is among the final 160 women to earn nominations for the NCAA’s Woman of The Year at the conference level.

TALLAHASSEE, Fla.|Florida A&M University’s Alelee Figueroa was announced as a 2020 NCAA Woman of the Year conference-level nominee on Tuesday.

Figueroa will represent the MEAC as its nominee for the award. The NCAA established this award in 1991 to celebrate the achievements of women in intercollegiate athletics. Now in its 29th year, the award is unique because it recognizes not only the athletic achievements of outstanding young women, but also their academic achievements, community service and leadership.

The Orlando, Fla. native won the MEAC championship in the hammer throw at the 2019 MEAC Outdoor Track & Field Championships (50.42 meters; 165 feet, five inches), and she also won that event this past indoor season at the KMS Invitational. She was part of a Rattler squad that won the 2018 MEAC women’s outdoor track & field championship, edging North Carolina A&T State by half a point.

Graduating this past May with a 3.90 GPA in Criminal Justice (concentration in Pre-Law Studies), Figueroa had the highest GPA in both the MS3 and MS4 classes of the Florida A&M Army ROTC Rattler Battalion. She was a Distinguished Scholar awardee in 2016, and Figueroa was named both a National Society of Collegiate Scholars inductee and a Nutrition L.E.A.D.S. Scholar in 2017.

In 2019, Figueroa, who earned FAMU’s first Woman of the Year honor, was an IFPO Protection Officer Certification Awardee from the International Organization of Black Security Executives (IOBSE) and a recipient of the FAMU Army ROTC Rattler Battalion’s Ancient and Accepted Scottish Rite of Freemasonry Award.

In addition to serving in the Army ROTC Rattler Battalion all four years, Figueroa was busy in the community. In 2017, she volunteered at the Wakulla County Community Center, tending to the community garden, cleaning and preparing harvested fruits and vegetables and promoting nutrition at community events. From 2018-20, she was a volunteer lead and pageant candidate with the Big Bend Filipino-American Association; not only did she help coordinate all community outreach events and fundraise for the Bantay Bata charity, she also represented Tallahassee, Fla. in the annual national pageant.

Figueroa was an S-2 Expansion and security officer for the National Society of Pershing Angels Sorority, Inc. in 2019, managing security clearance issues and providing both intelligence oversight and physical security. She was an S-3 Operations and Training Officer this year, on top of serving as Vice President of Phi Alpha Delta Law Fraternity, International, FAMU Pre-Law Chapter (which she helped re-charter), and HBCU for Life Committee Co-Chair for the Beta Alpha Chapter of the Alpha Kappa Alpha Sorority, Inc.

The NCAA Woman of the Year program is rooted in Title IX and has recognized graduating female college athletes for excellence in academics, athletics, community service and leadership since its inception in 1991.

Conferences can recognize two nominees if at least one is a woman of color or international student-athlete. All nominees who compete in a sport not sponsored by their school’s primary conference, as well as associate conference nominees and independent nominees, were placed in a separate pool to be considered by a selection committee. Four nominees from the pool were selected to move forward in the process with the conference nominees.

The Woman of the Year Selection Committee, made up of representatives from the NCAA membership, will now choose the Top 30 honorees — 10 from each division — from the conference-level nominees. The Top 30 honorees will be announced in September. From there, the selection committee will narrow the pool to three finalists from each division. The NCAA Committee on Women’s Athletics will select the 2020 Woman of the Year from the nine finalists.

The 2020 NCAA Woman of the Year will be named this fall.

Alelee Figueroa of FAMU Woman of the Year nominee