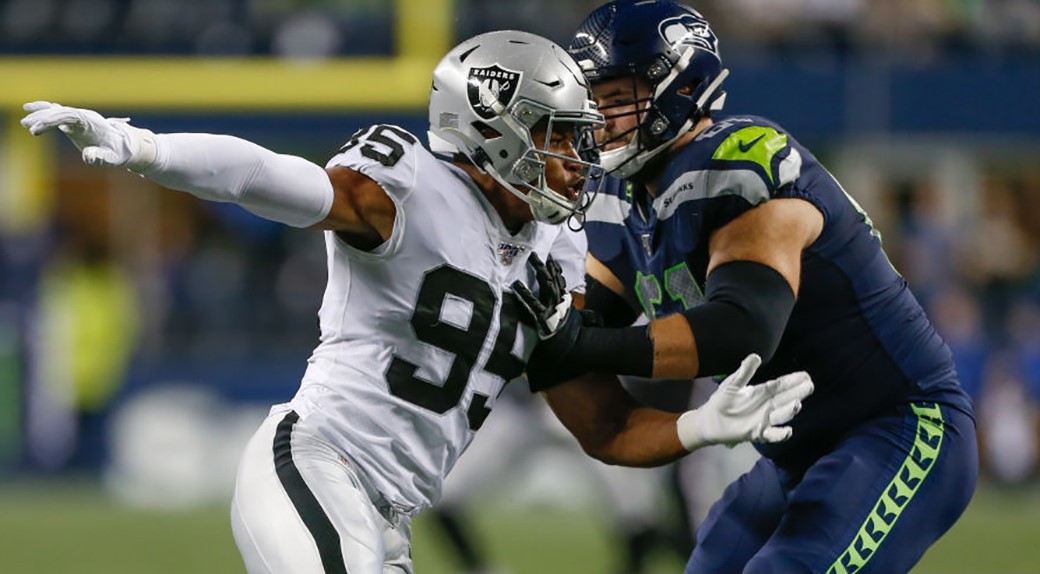 PRAIRIE VIEW – It’s unlikely that a man with a sub 4.5-second 40-yard dash would be late to anything.

Such was the case for Tampa Bay Buccaneers defensive end/outside linebacker Quinton Bell, a hyper-athletic marvel whose own story is even more unlikely, one that – if not for an unfortunate injury – may have a different ending.

Before arriving at Prairie View, the 6-4, 250-pound Bell wasn’t allowed to play what he calls ‘real football’ until his sophomore year in high school. The man’s first true love as far as sport was motocross, a passion first kindled at the age of nine. Bell stuck with that until his teenage years, when a tough landing during a race resulted in a fractured disk in his lower back.

Though Bell recovered physically, mentally he was far too aware of the risks to continue racing. Ultimately he turned to track, basketball and football.

Originally starting out at prep powerhouse Long Beach Polytechnic High School, Bell found his footing at Costa Mesa High School. A natural merely biding his time to show off his gifts, he became an immediate difference maker on the gridiron, starring as a wide receiver and claiming the title of the team’s fastest player.

After a year away from football at Riverside City College, where he again starred in track, he set foot on The Hill. Though Prairie View A&M was establishing itself as one of the most explosive offenses at the FCS level, the physical pass-catcher struggled to earn meaningful snaps, accumulating 19 grabs for 259 yards and a score in three years on offense.

As fate would have it, Bell’s last hurrah in the purple and gold came with a ton of new faces as Head Coach Eric Dooley was hired, along with his coaching staff in December of 2017.

“Going into my senior year, we got a whole new coaching staff and basically an all-new defensive staff with the exception of Coach (Bubba) McDowell,” Bell recalled. “I got a call from (new defensive line coach) Todd Middleton, and he expressed that he was interested in what I was able to do on the field and said he felt I had a shot to go pro at defensive end.”

Bell said he was floored by the seemingly absurd suggestion.

“Now as you can imagine – with me being a 215-pound wide receiver at the time and having been that for the last three seasons – hearing that was crazy to me,” Bell said. “My first response was literally, ‘What?’ I mean, it just didn’t make sense to me.”

Rest assured, he wasn’t the only one who thought the notion far-fetched.

“I didn’t have a lot of athleticism or experience coming back on the line,” Middleton said in an interview with ESPN.com. “I saw (Bell) walk by and he was physically imposing. So I brought it up to the other coaches, ‘Let me have him.’ There was a roar of laughter in the room. They thought I was crazy.”

Still, as time passed, meetings took place and talks were had… and Bell decided that maybe it wasn’t such a bad move after all when presented with the idea of trying something new or allowing an admittedly underwhelming college career to continue as it was.

So, the Californian asked himself what’s the worst that could happen.

“I came to the conclusion that I had nothing to lose,” he said. “I felt I hadn’t done much at receiver, so why not take a chance and get a change of scenery, you know? I figured I might as well see if what the coaches were saying is true, and I knew that I’d give 100 percent in anything I do. So I attacked it 100 percent.”

What resulted is one of the more improbable journeys to the pros in recent memory. After his initial foray into positional practice drills, he only had one question: “Why hadn’t I been doing this sooner?”

“Immediately after I switched, it felt way more natural. Even though I had never played the position, it felt like something I was supposed to be doing with the way my body moved and the control I had over those movements,” Bell said. “It clicked instantly. At first I was extremely undersized, I’m talking barely 220 (pounds). In the beginning, I’d use my speed to run around people and make plays during spring ball. The summer came, and I got with (PVAMU Strength and Conditioning) Coach (Nathaniel) Leonard – who is one of the best strength coaches I’ve ever had — and put on 20 pounds of muscle. I knew I’d always be fast and always be a great athlete, but I needed to add another level to my game. Once everything started coming together, it turned out really good for me.”

To say things came together for Bell would be a bit of an understatement. Viewing the chance in part as an audition tape, Bell managed a team-high 7.5 sacks on his way to second-team All-SWAC honors. Those rumblings about being a draft-worth prospect suddenly didn’t sound so out of the norm.

However, Bell couldn’t hear any chatter over the work he was putting in and the weekly strides he continued to make in hopes of figuring out the position.

“I’m going to be honest with you, I had no idea (I’d be drafted). I didn’t want to tell myself it was impossible, because anything’s possible,” Bell said. “At the same time, I wasn’t going to lie to myself and act like it wasn’t a longshot. You don’t hear stories like mine too often. To this day, people constantly tell me how rare that is and how amazing it was that I was able to do that. I just put my head down and kept working, I didn’t pay attention to what anybody was saying about me, good or bad. I wasn’t worried about what anybody was talking about, I just kept working. I can’t control my future or my past, but I can control what I’m doing now, and I kept making sure I’m getting better. That’s one thing about football … if you’re not getting better, you’re getting worse.”

Interestingly enough, one of the things that helped him get better was his prior training at the wide receiver position.

“I was a big bully type of receiver, so I always had a physical part of my game,” he said. However, the footwork … I was able to bring some of those releases to the defensive line.”

As Bell puts it, professional scouts knew it was uncharted territory. The way he saw matters was that as long as he showed he was getting better every week, perhaps he’d have a chance. Then, his pro day happened.

Standing 6’4 and weighing 238 pounds, Bell crushed the drills. He blazed a 40-yard dash timed as low as 4.38 seconds. He delivered a vertical leap of 41.5 inches. He timed 7.09 seconds in the three-cone drills, put up 23 reps on the bench, and dealt a broad jump of 11 feet, 4 inches. These numbers would have made him perhaps the best all-around performer at the 2019 NFL Scouting Combine – regardless of position – had he been invited.

Luckily, Bell didn’t need the invite to live out the dream. As his uncle, Nick, had been before him, Bell was drafted in the seventh round by Oakland, becoming the first PVAMU player since Matthew Teague to be chosen on draft weekend.

“That experience was great, man. My uncle was drafted by the Raiders in the ‘90s, so I’ve always had an emotional attachment to them, and that’s who I grew up rooting for,” Bell said. “There was a lot of emotion going into it. I learned so much from Oakland that I’m taking to Tampa Bay, and I’m grateful for the opportunity.”

From one set of pirates to the next, now Bell readies for year two on a Buccaneers team that’s a trendy pick to contend for the Super Bowl. However, the Long Beach, Calif. native is already immune to the chatter. Instead of focusing on preseason prognostications, he’s focused on being ready to contribute to a sneaky good defensive unit led by Lavonte David, Devin White and Shaq Barrett, the latter of whom was the 2019 NFL sacks leader.

“I just want to continue to get better and just be ready. I’ve learned so much in just one year. The main things are knowing your plays and staying healthy,” Bell said. “It’s been a long off-season with everything going on, but I’m studying and continue to get my body ready. I’m making sure that I’m ready. I don’t know when the NFL is coming back, but when it does, I’ll be ready. We’ve got a lot of veterans that will be ready, and I’ve got to be ready to ride the train with them.”

To that end, Bell hopes his efforts are a proper show of gratitude to his family, one of his biggest sources of strength throughout his road to the pros. Specifically, Bell hopes his younger brother, Xavier – a fine athlete in his own right that plays safety at Arizona – can use the lessons of big brother during his own journey.

“He’s had his own hardships as far as being at different schools and such, but I want him to see that it’s in our blood,” Bell said. “I want him to see me doing this and I want him in the NFL with me. I want my parents to know they raised me to be a hard worker and to be successful, and that all this is happening because of what they did for me.”

As for others who see his story… well, to assume someone else can follow directly in his footsteps is foolish. After all, Bell overcame nearly losing the ability to walk at the age of 13 to be drafted into the NFL as a defensive end with just one year of experience at the position under his belt. Thought he wasn’t as early to the destination, he’s on the right path all the same.

That said, the same driving principle that pushed Bell to his current heights can be applied to anyone else.

At first, Bell almost didn’t believe it. He’s since been making believers out of everyone else.